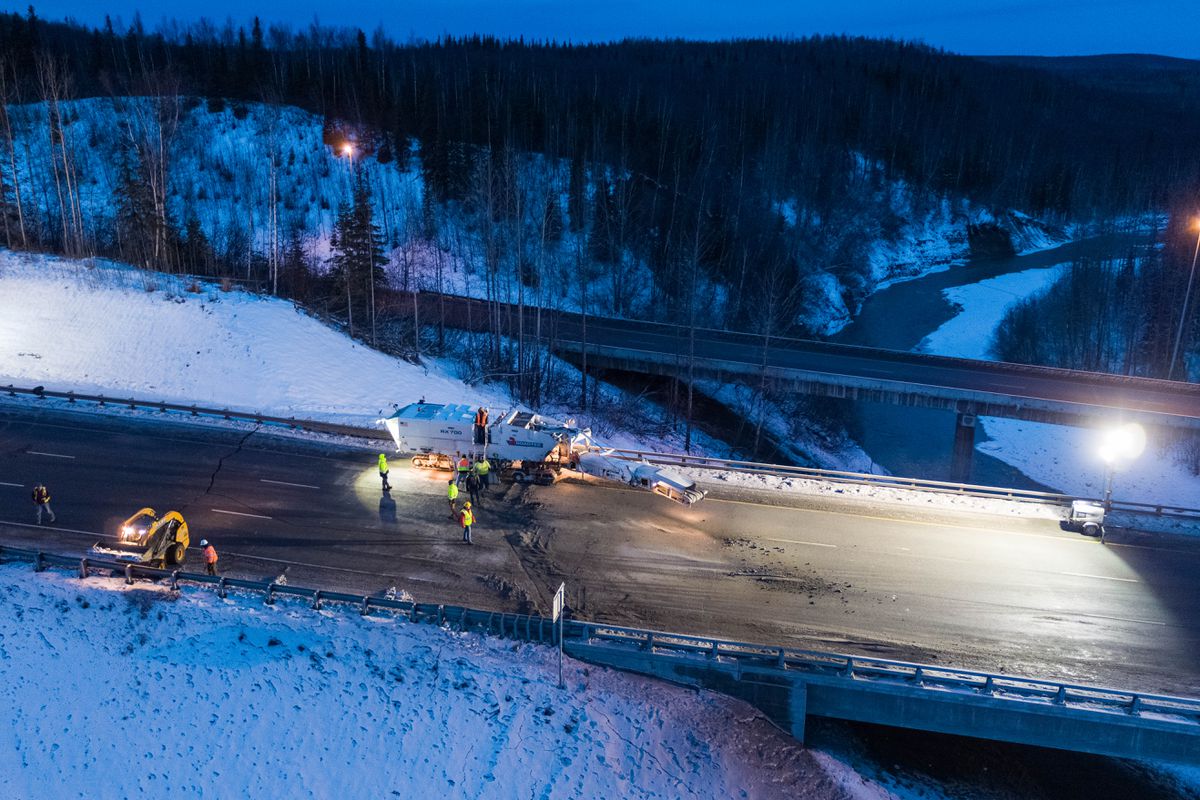 A collapsed section of road on the Glenn Highway north of Anchorage is set to snarl traffic for days as Southcentral Alaska pivoted from crisis response to cleanup in the area’s most significant earthquake in a half-century.

The 7.0 earthquake jolted Anchorage and the rest of Southcentral Alaska on Friday morning, cracking and collapsing roads and highways, damaging buildings, knocking out power and sending people scrambling outside and under furniture. The violent shaking left many homes a mess, and aftershocks continued through the night and through the day Saturday. Schools in Anchorage will be closed until Dec. 10, and many schools in the Mat-Su Borough will be closed until at least Wednesday.

Seismologists called the earthquake the most significant in Anchorage since the 1964 Good Friday earthquake, in terms of how strong the ground itself shook and severity of impact. The size of the quake and a risk of underwater landslides in Cook Inlet triggered an unusual localized tsunami warning. The day after, people all over Southcentral Alaska were rattled and anxious.

[The day after: Alaskans sweep up and reflect following 7.0 quake]

But relief was tangible as Anchorage officials reported that there were no deaths, and generally minor injuries — a broken arm, cuts from glass. And despite widespread reports of varying degrees of structural damage, no buildings entirely collapsed, which officials credited to Anchorage’s strict building codes. Hospitals and airports were fully functional Saturday and businesses were beginning to reopen.

“We are on the road to returning to normal,” Anchorage Mayor Ethan Berkowitz declared at a news conference Saturday morning.

The shifting earth did wreak havoc on transportation networks north of Anchorage. Major damage was reported on state roads in at least eight areas, and cracks and shifting earth indefinitely halted train service between Anchorage and Fairbanks. Aftershocks and ground settling caused even more damage Saturday, said Shannon McCarthy, a spokeswoman with the Alaska Department of Transportation and Public Facilities.

[‘We’re all shaken up.’ It’s normal to feel scared, anxious and helpless after that big quake. Here’s what to do about it]

A collapsed section of the Glenn Highway north of Anchorage quickly emerged as the top concern. A landslide ate away an entire lane of road in the Mirror Lake and Thunderbird Falls area north of Chugiak, forcing what will likely be days of detours and sluggish traffic.

Commuters to and from the Mat-Su area should make plans to work from home this week, Falsey said. State offices will be closed Monday to limit traffic on the highway, Alaska Gov. Bill Walker said in a statement late Saturday afternoon.

DOT crews and contractors were able to mostly reopen the outbound ramp of Eagle River Bridge on Saturday, McCarthy said. But the Palmer exit off the highway was still closed, after a gap appeared between the abutment and the bridge.

Vine Road near Wasilla also suffered major damage and a section is closed. From above, the heavily used connector road looked like a giant bowling ball hit it. Point MacKenzie Road sustained serious damage as well.

To the south, the Seward Highway was initially closed by a rockslide but reopened by Friday afternoon. Officials still warned of danger from falling rocks on the Seward Highway near Indian, between Miles 104 and 113. DOT was advising against all travel through the corridor, McCarthy said: “If you can avoid the area, please do.”

Elsewhere in the state’s transportation network, the Alaska Railroad reported that cracks, sloughing and other damage had rendered parts of the railroad tracks north of Anchorage “impassable.” It wasn’t known when service between Anchorage and Fairbanks would resume.

Trains will be running south between Anchorage and Whittier by Sunday morning, according to Tim Sullivan, a spokesman with the Alaska Railroad.

The earthquake triggered a massive cleanup and analysis effort within the Anchorage School District. Since Friday, project managers, custodians and contractors have been systematically working through the district’s 92 schools and buildings, checking for signs of safety problems, cleaning up messes and fixing cracks in walls, said Darin Hargraves, ASD’s senior director of maintenance and operations.

Early assessments Friday used a FEMA system of green, yellow or red labels, Hargraves said. A “red” school would be unsafe to enter, while a “yellow” school would have more of a maintenance problem. A green school would be clean, structurally sound and with working utilities and sprinkler systems.

As of late Saturday, no schools were listed as “red," Hargraves said. A collection of “yellow” schools were being steadily moved over to the “green” category, he added. He said it was possible some schools and buildings would have to be closed past Tuesday.

“We will not open a school if it is not safe,” Hargraves said. “People should be very confident in that.”

Superintendent Deena Bishop said during a news conference Saturday afternoon the district would contact families and parents with plans to re-enter buildings. Staff and students who left during emergency evacuations left personal belongings behind, Bishop said. She said those people will likely be reunited with belongings Monday or Tuesday.

Out of about 56,000 students and staff, only two injuries were reported, Bishop said: A custodian was hurt by broken glass and a student hurt their wrist.

There was a burst of excitement when a teacher in Chugiak went into labor after the quake, Bishop said. She said firefighters in the area pitched in to help.

Utilities return back to normal

After thousands of households lost power after the quake, the electricity was back on for almost the entire city by Saturday morning. Outage maps showed only a handful of Chugach Electric customers still without power.

Crews with Enstar Natural Gas Co. were going door-to-door to respond to calls about gas leaks. Enstar spokeswoman Lindsey Hobson said late Saturday afternoon that there were fewer than 600 leak calls left in the queue. Only a small percentage of the total calls have so far out to be actual leaks, Hobson said. She said most people only thought they smelled gas, or turned off gas as a precautionary measure.

The gas utility was bringing up additional crews from Michigan to help, Hobson said.

[Experts: Alaska quake damage could have been much worse]

On the water side, officials retained a boil-water advisory Saturday for all parts of Anchorage except Girdwood. City manager Falsey said the advisory was issued “out of an abundance of caution” as crews responded to about 40 reports of suspected water main line breaks. He said there was a remote possibility broken pipes could cause bacterial contamination, though he said there was no evidence of contamination.

There were no plans to shut down the entire water system, he said.

About 53 people who were displaced after the quake spent Friday night at the Egan Convention Center in downtown Anchorage. That included nine families, Falsey said. About 10 more people spent the night at the Chugiak Recreation Center.

By Saturday night, the city and the Red Cross of Alaska had opened a single shelter for the entire region at the Fairview Recreation Center at 1121 E. 10th Avenue in Anchorage.

In a statement Saturday, the Red Cross said it had served more than 245 meals to people in need since the quake. Many residents were able to return to their homes Saturday as power and basic utilities were restored, the agency said.

As residents returned to homes, officials began to turn their worry to the weather. The heavy winds that picked up about noon led to warnings to secure loose belongings and watch out for loose trees or limbs. A snowstorm was also set to roll in Sunday night, bringing several inches of snow to the Anchorage Bowl and up to a foot to the Hillside, said Jodie Hettrick, the city fire chief.

She and other officials advised hunkering down and avoiding all travel unless it was absolutely necessary.

“This is one of those weekends, boy, stay home and stream Netflix,” Hettrick said.

[How to look for serious structural damage at home]

Lanes were also closed between Tudor Road and 36th Avenue, where the quake caused pavement to buckle, along with several other spots around the city.

State bridge inspectors flew up from Juneau Friday night to review all of the bridges in the area, McCarthy said. She said DOT is in the process of compiling damage estimates for federal disaster relief.

Alaskans with damage to homes, vehicles and personal possessions should document damages with photos and videos and to contact insurance companies, officials said.