Some 1,800 aftershocks have been measured since Friday’s 7.0 earthquake in Alaska 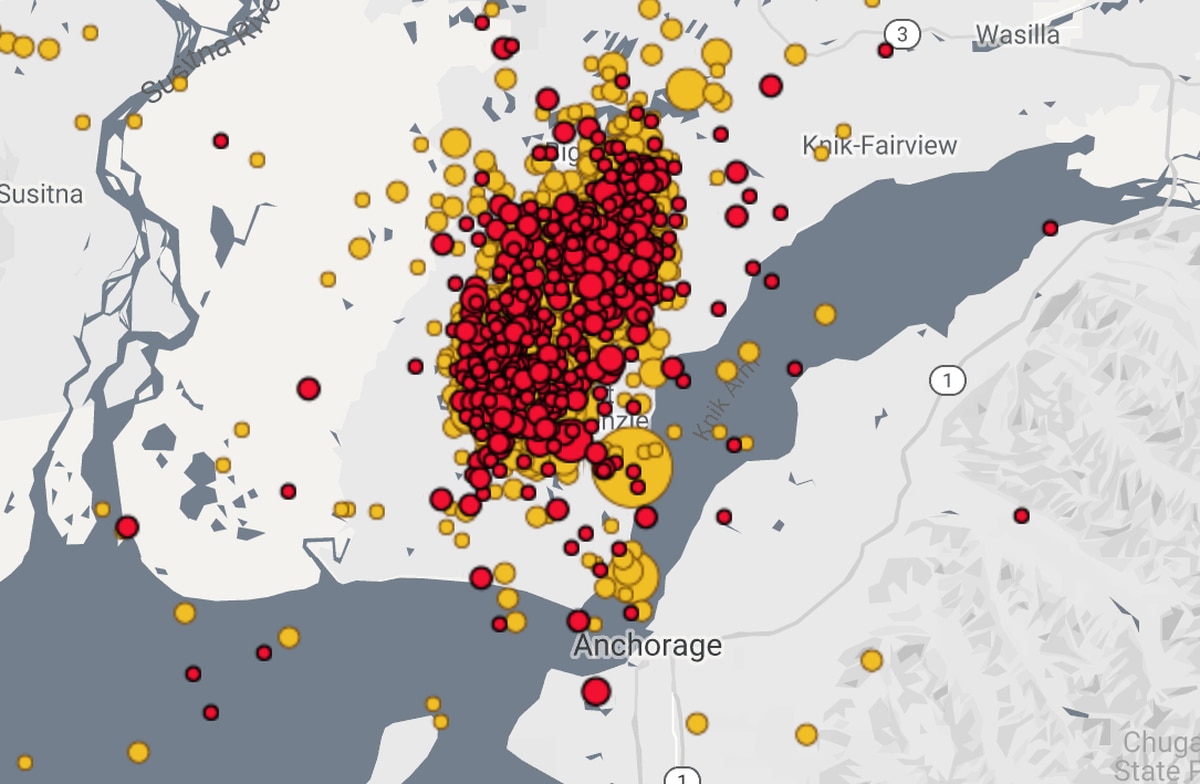 Earthquakes associated with Friday's 7.0 earthquake north of Anchorage as of 5:45 p.m. Sunday. The red dots represent shakes in the previous 24 hours, and the yellow dots are from the past week (with virtually all of them since Friday. The large dot directly north of the city was Friday's quake) Map from Alaska Earthquake Center.

Earthquakes associated with Friday's 7.0 earthquake north of Anchorage as of 5:45 p.m. Sunday. The red dots represent shakes in the previous 24 hours, and the yellow dots are from the past week (with virtually all of them since Friday. The large dot directly north of the city was Friday's quake) Map from Alaska Earthquake Center.

Small aftershocks continued Monday from Friday’s 7.0 earthquake, with more than 1,800 measured by early evening. A total of 153 measured greater than 3.0, 18 were at 4.0 or greater and five were greater than 5.0, according to the Alaska Earthquake Center.

If you're wondering how the aftershock sequence looks to a seismometer, here is the last 24 hours of data from our Rabbit Creek station. We're up to around 1,800 now, the great majority of which were too small to feel. pic.twitter.com/HxO6BMxrWq

Dozens of small earthquakes rattled Anchorage and Mat-Su on Sunday night and early Monday -- and a few bigger ones probably caused unwanted wake-ups.

Twin magnitude 3.5 shakers struck at 9:51 and 9:52 p.m. Sunday, the first 10 miles north of Anchorage and the second 18 miles northwest of Joint Base Elmendorf-Richardson, according to the U.S. Geological Survey Earthquake Science Center.

Aftershocks from Friday’s magnitude 7.0 quake will continue to diminish over time, but that doesn’t mean the shaking will stop right away.

“You can expect earthquakes in magnitude 5 or 4 to continue for the next couple of weeks, and as time goes on it tapers off,” said Rafael Abreu, a geophysicist with the U.S. Geological Survey Earthquake Science Center. (Track the latest aftershocks here.)

As of Sunday evening, there had been nearly 1,400 recorded aftershocks of any magnitude; 593 of magnitude 2.0 or greater; 17 that registered at least 4.0; and five that were at least 5.0. All the aftershocks have been clustered around the epicenter across Knik Arm from Anchorage.

[Why the 7.0 earthquake was felt differently across Anchorage — and why it has potential for more big aftershocks]

Abreu said models show the frequency, and strength, of the quakes should go down over time.

Here's a ground motion visualization for the first hour after the earthquake. You'll see 7 major aftershocks (notated) along with many smaller ones that only show up on the stations near the epicenter. pic.twitter.com/Im08mx3DDj

Although devastating, large earthquakes give scientists a wealth of data to help study and better model future earthquakes.

“It gives us a better understanding of what is happening from a geologic point of view,” he said.

While Friday’s quake was a big one, Abreu said it wasn’t unusual in that Southcentral Alaska is one of the world’s most seismically active areas.

“We’re definitely not surprised to see an event of this magnitude happen in this area,” he said.