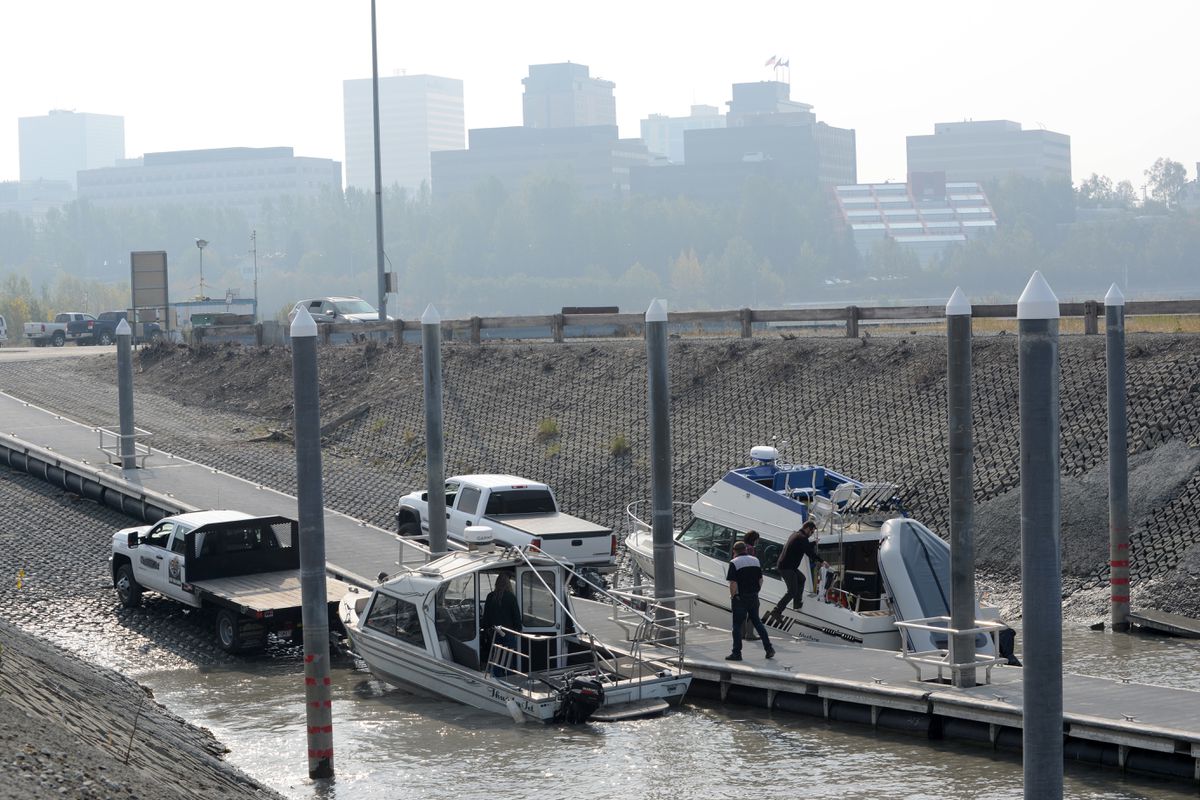 The small boat launch at Ship Creek was busy with incoming and outgoing boats on Friday, despite the heavy smoke. Downtown Anchorage has an unhealthy amount of smoke in the air from wildfires, Aug. 23, 2019. (Anne Raup / ADN)

The small boat launch at Ship Creek was busy with incoming and outgoing boats on Friday, despite the heavy smoke. Downtown Anchorage has an unhealthy amount of smoke in the air from wildfires, Aug. 23, 2019. (Anne Raup / ADN)

At Providence Medical Group in Anchorage, pulmonologist Dr. Greg Gerboth has noticed an uptick in the number of people calling since last weekend with respiratory health concerns.

Some have been coughing more than usual or have increased shortness of breath, he said.

“It really started the past weekend after all the wind came through and kicked up all the fires,” he said. There’s typically “not a lot of increased respiratory activity this time of year" in the area.

Gerboth is one of several local providers who have seen more patients recently for issues related to smoky air as wildfires burn around Southcentral Alaska.

August is usually a rainy time for the region, but this year is different. Blazes in the Susitna Valley and on the Kenai Peninsula are roaring on later than usual, primed by an abnormally hot and dry summer. Part of the region has been designated as being in an “extreme drought" for its first time in the U.S. Drought Monitor’s 20-year history.

After dissipating slightly this week, a thick layer of smoke from the fires wafted into Anchorage again Friday, bringing with it a renewed designation of “unhealthy” air from the Alaska Department of Environmental Conservation. A smoky smell permeated homes and offices. The Chugach Mountains and the Anchorage Bowl were once more obscured by haze.

Unhealthy air, as categorized by the state DEC, poses risks to everyone — not just people who have respiratory issues or other sensitivities to pollutants.

Wildfire smoke is expected to impact the Copper River Valley, Mat-Su area, Anchorage Bowl and most Kenai Peninsula communities through Monday, according to an air quality advisory the state issued Friday.

The Anchorage Neighborhood Health Center in Midtown has had an increase in patient visits related to smoke exposure, said Dr. Phillip Mendoza. He moved to Alaska two years ago from Colorado, where he commonly saw patients for health issues tied to extremely dry air.

“When I came to practice in Alaska, that was not something I saw,” he said. “But now this summer and especially this month, I’m seeing some of those issues come up.”

More patients have been coming in with irritated respiratory tracts, he said. For some people, smoke makes chronic diseases worse.

At Southcentral Foundation, Dr. Verlyn Corbett has noticed his patients with asthma and other respiratory illnesses having more difficulties because of the smoke. Some are using their inhalers more frequently. People without such issues have reported nasal congestion, sinus pressure and sore throats.

“I think most everybody is doing a pretty good job of recognizing they need to stay inside,” he said.

Gail Heineman is retired and lives in West Anchorage. She’s typically out on her bicycle more this time of year, riding along the Tony Knowles Coastal Trail or home from the gym. But this week she’s limited her activities outdoors, and now even indoors.

She hasn’t bought a breathing mask yet here in Alaska — she used one to deal with California pollution when she lived there years ago — but she’s leaning that direction, she said.

“If this keeps up, it may be time, because I’ve got a big garden to harvest and there’s things I gotta do,” she said.

If you want to use a mask, make sure you have the right kind; simple dust masks won’t do the trick. Respirator masks, labeled R95, N95 or P95, can help filter smoke, but an airtight seal on the face is key for effectiveness, according to Alaska Department of Health and Social Services.

“If you have to be outside for extended periods of time in smoky air, a properly fitted respirator can help reduce your exposure; however, they increase resistance to airflow and can make it harder to breathe,” the agency said.

Children, the elderly and people with asthma, chronic obstructive pulmonary disease or heart disease are particularly sensitive to inhaling wildfire smoke, which is a mix of gases and fine particles. Chest pain, coughing, asthma attacks, headaches and shortness of breath are just some symptoms the smoke can cause.

Heineman has noticed a crackle in her throat and some soreness in her eyes. One night this week, she woke up and her home smelled like a campfire.

There are a number of factors that determine whether breathing wildfire smoke will affect your health, the health department said, including how much of the smoke you breathe in, how long you’re exposed to it, the degree to which you’re exerting yourself and your personal health.

People should stay indoors with the windows and doors closed when the air is unhealthy, the department said. The agency also advises against burning candles, incense or anything else indoors, and trying to avoid cooking, which can cause more indoor air pollution.

For some people, staying inside is no simple task. The Anchorage Neighborhood Health Center has a significant number of patients who are homeless and struggle with access to indoor air, said Mendoza.

“That has been a lot more challenging, and a lot of times, there’s not a solution there because of the current state of housing,” he said. “So we just do our best.”

In Alaska, a summer of extreme weather continues