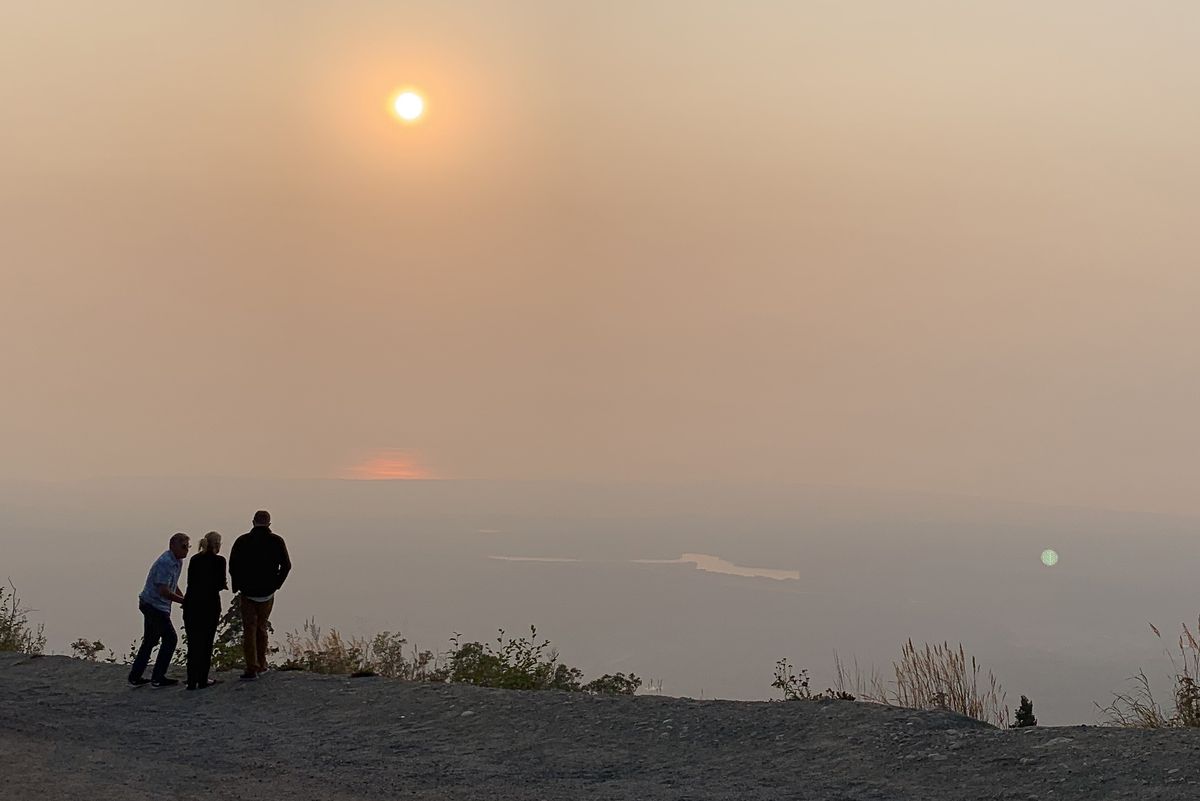 People watch the setting sun behind Knik Arm from a vantage point at the top of Skyline Drive in Eagle River as smoke from the Swan Lake wildfire drifts over the area on Tuesday, Aug. 20, 2019. (Matt Tunseth / ADN)

People watch the setting sun behind Knik Arm from a vantage point at the top of Skyline Drive in Eagle River as smoke from the Swan Lake wildfire drifts over the area on Tuesday, Aug. 20, 2019. (Matt Tunseth / ADN)

In Southcentral Alaska, August is usually a season of rain, ripe berries and going back to school.

It is not, traditionally, wildfire season. Except this year.

Since Saturday, harsh winds scouring bone-dry forests from Talkeetna to Homer have helped fan four new significant wildfires, along with another fire that’s been burning on the Kenai Peninsula all summer.

The McKinley fire, north of Willow, forced the evacuation of hundreds of people, burned as many as 80 structures and led to hourslong traffic delays and closures of the Parks Highway, a crucial artery between Southcentral and Interior Alaska.

“This is unprecedented in Alaska to have a fire this devastating this late in the year,” Alaska Division of Forestry spokesman Tim Mowry said of the McKinley fire.

Meanwhile, the massive Swan Lake wildfire roared back to life after a period of near dormancy, putting the smoke-choked Cooper Landing area under evacuation alert and snarling traffic on the Sterling Highway, the only road to points south on the Kenai Peninsula. Two new smaller wildfires are also burning near Homer as of Wednesday.

Scientists say Alaska’s summer of record-trampling weather extremes primed the way for a resurgence of the wildfire season late in the summer. They also say the scenario playing out this week is likely to repeat itself in a warming climate of Alaska’s future.

“This is a rare event,” said Rick Thoman, a climate scientist with the University of Alaska’s International Arctic Research Center. “It will be less rare in the future.”

Caption
Smoke rises from vehicles and structures at Mile 86 of the Parks Highway on Monday, Aug. 19, 2019, that were damaged during the fast moving McKinley fire near Caswell. (Bill Roth / ADN)
Wait 1 second to continue.

The conditions that allowed for a late-August wildfire outbreak started with an early snow melt, said Thoman.

“This story really begins this past spring, a record warm spring,” he said.

The ground warmed and dried weeks or months earlier than normal. After a mild May, June was “extremely dry” and warm. July was “ridiculously warm,” Thoman said. It set the record for the warmest month in the history of Alaska. Anchorage broke a series of high-temperature records.

Most parts of the Alaska recorded below-normal precipitation during July, Thoman said. The Swan Lake fire grew during this time, and large fires in remote areas of the Interior grew.

It rained a little at the end of July. But not much, and because it was so warm the precipitation did little to wet the landscape in a way that would put a damper on the fires, he said.

That’s playing out in different ways around the state. Interior Alaska rain caused flooding and mudslides at Denali National Park and Preserve. The Eielson Visitor Center there recorded 18 inches of rain this month.

“But you can’t squeeze a drop of rain out south of the Alaska Range,” Thoman said.

Large swaths of Southcentral Alaska, from the Susitna Valley through Anchorage to the Eastern Kenai Peninsula, are classified as being in “severe drought” by the U.S. Department of Agriculture.

The persistently dry weather can be attributed to a “superhighway of moisture” flowing from the Gulf of Alaska to the Seward Peninsula in Western Alaska, then making a hard right into the Interior without touching Southcentral Alaska, Thoman said.

The weather pattern itself that has allowed moisture to bypass Southcentral Alaska dry isn’t that unusual, he said.

“What’s uncommon is to have it stuck for so long,” for weeks and months, Thoman said.

By last weekend, Southcentral Alaska was full of dry forests and parched ground after months of heat and little moisture. Then came the element that set off the wildfires: a windstorm.

Strong north winds — gusting to 51 mph at the Ted Stevens Anchorage International Airport at one point — pushed over power lines that may have sparked fire, though officials have not confirmed any of the causes of the new wildfires.

“This was the last piece of the puzzle. We had an ignition source,” Thoman said. “Then we had winds that would push any fire that started.”

In some ways, the late-season outbreak of fire happened because of a perfect storm of events that isn’t likely to be repeated often, Thoman said.

But in the bigger picture, early spring melts will leave ground exposed for longer, meaning longer fire seasons. When warm summers happen, this kind of wildfire season could be repeated, he said.

That kind of a change would have policy implications, said Thoman: A once-in-a-lifetime summer might be a story to tell, but a once-in-a-decade event is “something to plan for.”

Researchers who use climate modeling to predict the future of a warming Alaska say longer and more intense wildfire seasons will become a mainstay of life here.

“In the big picture of it being incredibly hot and dry, particularly in Southcentral Alaska and on the Kenai Peninsula, (the long and intense wildfire season) is not a one-off," said Scott Rupp, the deputy director of the International Arctic Research Center at the University of Alaska. “It’s most likely something we’re going to see more of.”

Since 1990, Alaska has seen an increase in the frequency and magnitude of major wildfires. There have been 11 years in which more than a million acres burned, Rupp said.

Between 1950 and 1990, there were only seven years where more than a million acres burned.

So far this year, about 2.5 million acres have burned in Alaska, according to the National Interagency Coordination Center’s Aug. 20 management situation report.

The record was 2004, when more than 6 million acres burned. That year was the “the tipping point” of longer, more intense fire seasons, said Chris Maisch, the Alaska state forester, in an email.

Fire managers are taking notice of the changing dynamics, said Alison York, the coordinator of the Alaska Fire Science Consortium.

The classic Alaska fire season starts around the summer solstice and trails off in early August, with soaking rains. That pattern has worked out well for Alaska: The heart of wildfire season in the West is August and September.

So fire managers in Alaska have been able to rely on calling up specialized firefighting teams from states like Montana, Utah and Nevada to help fight our wildfires here because they aren’t as busy at home, said York.

Then, when it is the busy season in the Lower 48, Alaska’s crews have often traveled south to reciprocate.

If Alaska’s fire season gets longer, things could get complicated.

“Everyone is concerned that those two time periods are going to overlap,” York said.

The official fire season in Alaska used to begin on May 1. Now it starts on April 1, because snow melt has happened earlier in the season, according to Rupp.

[More freak weather comes to Alaska, which has had an unprecedented summer]

Alaskans who feel something different as their kids pose for back-to-school pictures in heavy wildfire smoke are right, said York. There’s nothing happening this summer that wasn’t predicted by climate scientists, she said. It doesn’t feel normal, but what’s normal is changing.

“It’s a good time to give a little heads up to Alaskans about this,” York said. “People are right when they say, ‘Gee, this doesn’t feel normal.’ ”

For people on the road system in Alaska, changing wildfire seasons may be the most visible manifestation of a changing climate, said Thoman.

“For people who don’t have a connection to the changing sea ice of Western Alaska — in the Railbelt, maybe wildfires will be the thing that’s most obvious and impactful.”