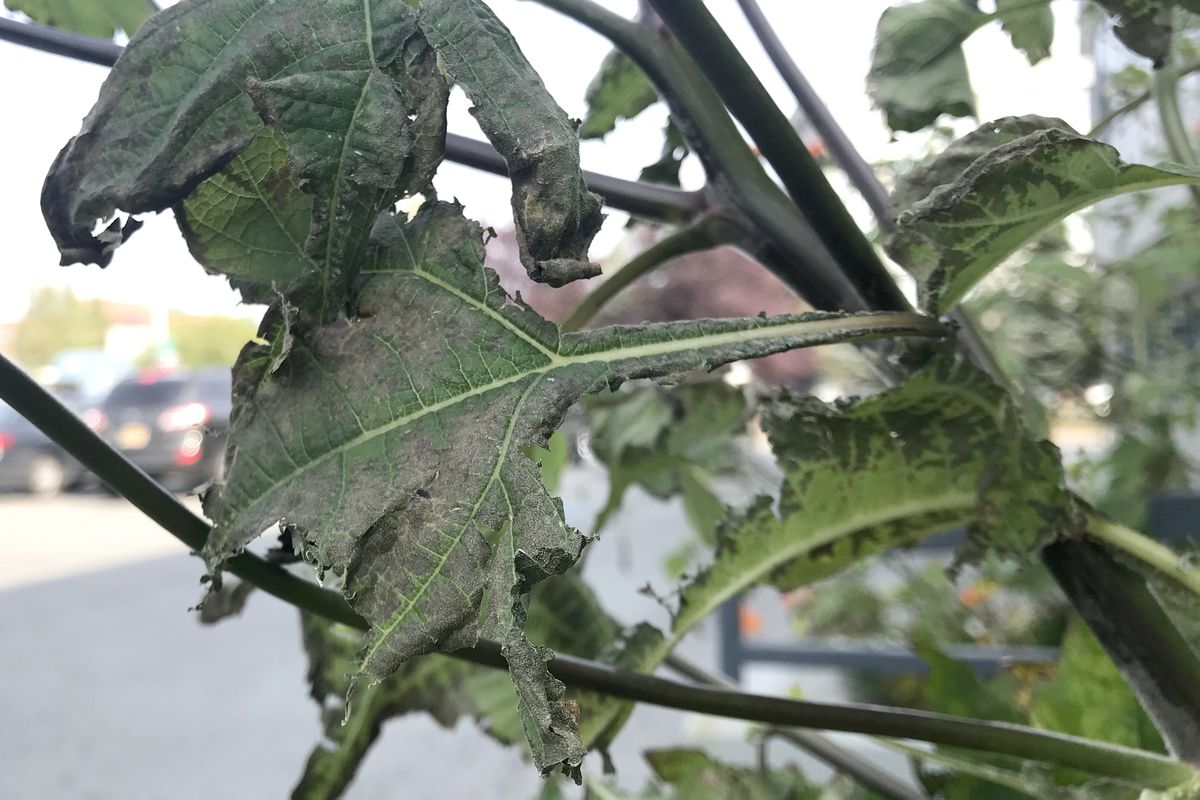 Parched leaves in a garden are an indication of drought. Much of Southcentral Alaska is experiencing some level of drought, and Anchorage and Mat-Su are in extreme drought. (Anne Raup / ADN)

Parched leaves in a garden are an indication of drought. Much of Southcentral Alaska is experiencing some level of drought, and Anchorage and Mat-Su are in extreme drought. (Anne Raup / ADN)

This year’s already-unprecedented summer is on track to beat yet another record: becoming the driest ever recorded in Southcentral Alaska.

The U.S. Drought Monitor has classified part of the region — including Anchorage, the Susitna Valley and a portion of the northern Kenai Peninsula — as being in an “extreme drought” for the first time in the drought monitor’s 20-year history.

Extreme drought is the second-highest drought designation, underneath “exceptional drought,” which Alaska has never recorded. Most of the southern coastal swath of Alaska, from the Panhandle to the Aleutians, is experiencing drought to a lesser degree.

Southcentral Alaska has seen less than an inch of rainfall since June 1 and no measurable rain at all during August, said climatologist Rick Thoman of the Alaska Center for Climate Assessment and Policy.

Before this year, the region’s driest summer was in 1969, when it received only 1.9 inches of rainfall in three months.

By this point in August, Anchorage typically averages about 2 inches of rain, Thoman said.

The drought is one consequence of long-standing high pressure patterns that have been dominant over southern Alaska all summer, Thoman said. High pressure systems, typically associated with clear skies, are also responsible for this summer’s record high temperatures, meteorologists have said.

“That served to block storms or divert them around the region to other parts of the state,” he said.

That, coupled with an unusually early snow melt that gave the ground more time to dry out and warm up, has wrought havoc on the region — not the least of which is an extended and highly active wildfire season.

Three large wildfires were still burning across the region Thursday, whipped up by a combination of strong weekend winds and bone-dry fuels: the mammoth Swan Lake fire 5 miles east of Sterling, which had consumed more than 220 square miles at last count; the McKinley fire north of Willow, which has destroyed as many as 80 structures; and the nearby Deshka Landing fire, which is threatening cabins on Red Shirt Lake.

Fire crews are still working to contain two smaller wildfires on the southern Kenai Peninsula, as well, one of which has prompted a Level 1 “ready” evacuation notice for nearby neighborhoods.

Even in places that haven’t burned, arborists say the dry conditions are causing stress to plant life, leaving trees susceptible to insects and disease and prematurely yellowing leaves before fall has even arrived.

“Places like the (Delaney) Park Strip has forced our hand to use water trucks, and that is not typical," said Anchorage Parks superintendent Josh Durand.

The drought has also caused streams in the region to dry out, with water levels sinking so low in some places that salmon haven’t been able to get upstream.

The Alaska Department of Fish and Game closed the Little Susitna and Deshka Rivers to coho salmon fishing Monday until the run strength improves.

Water levels at Eklutna Lake, Anchorage’s primary water supply, haven’t been hurt, according to Sandy Baker, a spokeswoman for Anchorage Water and Wastewater Utility. The lake’s level is normal for this time of year, and is actually rising because of melt water from Eklutna Glacier, she said.

Baker said the utility normally sees increased demand for water during the summer, though that demand has lasted longer this year.

“While high demands require us to produce and deliver more water, we have reserve capacity to meet peak demands and our system is designed to accommodate that,” she said.

Healing the impacts of the drought will take more than a day of rain, though. It would take at least a week or two of consistent rainy patterns to end this year’s wildfire season, according to Thoman, the climatologist. Reversing other ecological consequences may take even longer.

“To get trees looking better, to get streams flowing again, we’ll need several months of normal or above normal precipitation,” said Rich Tinker, a drought specialist with the National Oceanic and Atmospheric Administration’s Climate Prediction Center.

That’s not expected anytime soon, though: No significant rainfall is in the immediate forecast for Southcentral Alaska.

Correction: An earlier version of this story reported the highest U.S. Drought Monitor designation as “considerable.” It is actually “exceptional.”