Conciliatory speech by Gov. Dunleavy at AFN punctuated by protests over his budget cuts 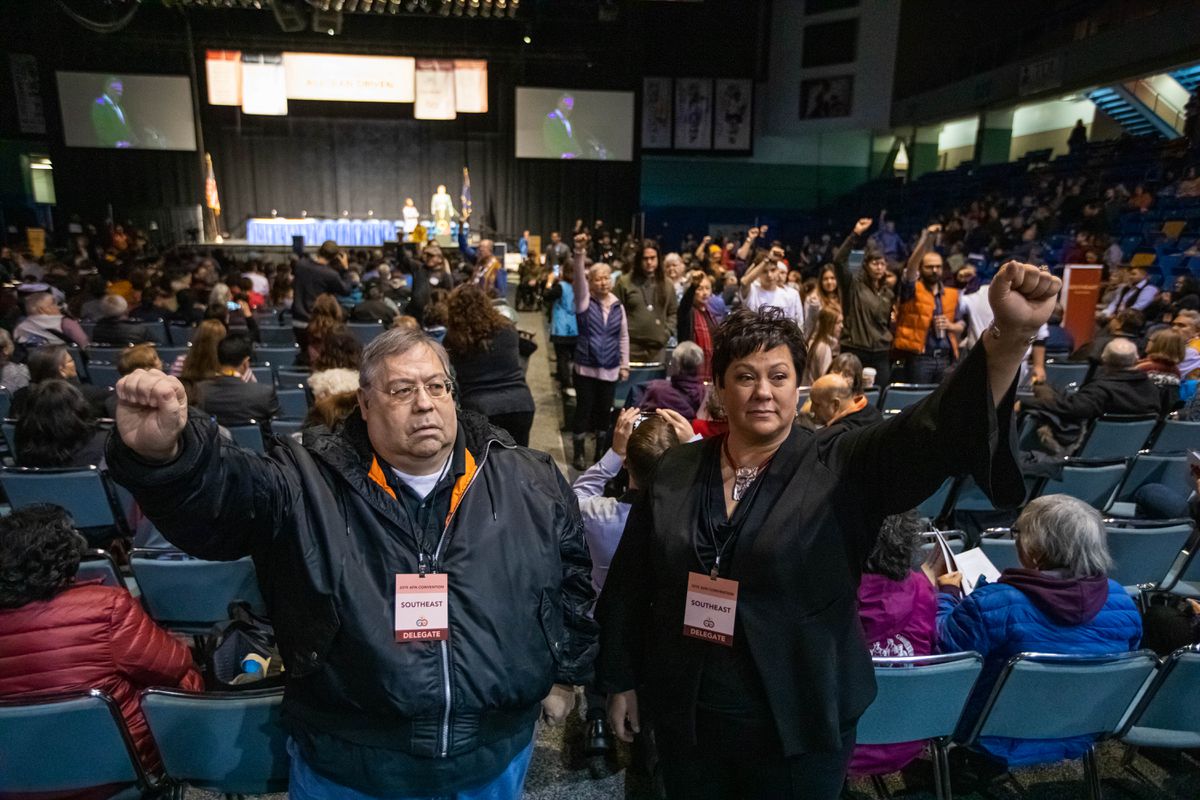 Will Hanbury, Jr. of Sitka and Nicole Hallingstad, from Petersburg, stand in silent protest during an address by Gov. Mike Dunleavy during the Alaska Federation of Natives convention Thursday at the Carlson Center in Fairbanks. “I was standing for missing and murdered indigenous women," said Hallingstad. "There is no disrespect when we respectfully have a difference of opinion on priorities. I will always stand for this issue, and appreciate the governor’s comments addressing the backlog of rape kits.” (Loren Holmes / ADN)

Will Hanbury, Jr. of Sitka and Nicole Hallingstad, from Petersburg, stand in silent protest during an address by Gov. Mike Dunleavy during the Alaska Federation of Natives convention Thursday at the Carlson Center in Fairbanks. “I was standing for missing and murdered indigenous women," said Hallingstad. "There is no disrespect when we respectfully have a difference of opinion on priorities. I will always stand for this issue, and appreciate the governor’s comments addressing the backlog of rape kits.” (Loren Holmes / ADN)

FAIRBANKS — Tension between Alaska Natives and Gov. Mike Dunleavy over the governor’s dramatic cuts to state services surfaced immediately Thursday at the start of the Alaska Federation of Natives convention, the state’s largest annual gathering of Native people.

During the governor’s address an hour after the event in Fairbanks began, bursts of traditional drumming and singing — plus shouts and the occasional boo — punctuated his speech from the back of the Carlson Center.

The governor pressed on, showing little emotion, reading from a script on the podium as scattered clumps of people across the convention floor stood silently with raised fists, backs to him. Hundreds of people in the audience remained seated.

The governor in August vetoed more than $200 million from the budget, including more than $50 million from Medicaid services. The vetoes followed his attempts earlier in the year to make bigger reductions, stirring discontent and uncertainty among a wide array of groups.

Discussion about the governor’s cuts is a pivotal issue at AFN’s 53rd annual convention. Themed “Good Government, Alaskan Driven," the conference runs through Saturday. More than 4,000 Native people from villages around Alaska are expected to attend, helping set the group’s political course for the next year.

AFN and Cook Inlet Regional Inc., a leading Alaska Native corporation, have publicly disagreed with the governor over his proposals. CIRI has supported the ongoing recall effort against Dunleavy.

AFN delegates from around Alaska on Saturday will consider nonbinding resolutions, some asking the governor and Legislature to increase support for reduced programs, such as for more Medicaid services.

[Alaska governor fires back at AFN over criticism of his budget]

The protesters, who stood for a handful of minutes, were organized by Defend the Sacred-Alaska, a coalition of groups fighting for indigenous and conservation issues. Defend the Sacred members distributed a flyer before the demonstration, asking for people in the audience “to show what we really think of Dunleavy’s leadership.”

The protesters included members of the Alaska-grown, Grammy-winning band Portugal. The Man. They attended the convention to be recognized by AFN for highlighting dire indigenous causes like missing and murdered indigenous women.

“The budget cuts hit close to home, and they affected youth, elders, education,” Portugal. The Man bassist Zach Carothers said before the protest. “These are things we stand up for.”

Dunleavy, a former public school educator in Northwest Alaska, offered a conciliatory approach during his speech. He said he looks forward to working with Alaska Native people and other Alaskans to address the next budget.

He acknowledged that the budget discussions were very difficult and at times contentious.

“I will be the first to say as governor I must take responsibility for my part in this process and I will work work hard to ensure the budget process goes much more smoothly this year,” he said.

As the sound of protest drumming rose, causing the governor to speak haltingly, AFN co-chairman Will Mayo took the stage.

He called for silence. People can disagree with the governor, but should do so respectfully, Mayo said.

That generated applause and occasional statements of approval from some seated audience members.

“You are our guest,” Mayo said, asking the governor to continue.

Victor Joseph, chair of the Tanana Chiefs Conference, representing several tribes in the Fairbanks region, later apologized to the governor.

Dunleavy told the audience he was working to put more troopers in rural Alaska, helping address the shortage of police in Alaska villages that led U.S. Attorney General William P. Barr this summer to declare a public safety emergency in rural Alaska.

The governor stood with his Alaska Native wife, Rose, by his side.

The governor said he would work with Native lawmakers to protect the $1 billion Power Cost Equalization Fund that helps lower the high cost of energy in rural Alaska and that critics have said Dunleavy wants to dismantle.

He said the state will cooperate with tribes to create agreements giving them more input into improving educational services for their children.

“My administration will be introducing a bill this coming legislative session that will make tribal compacting for education a reality,” Dunleavy said.

“I truly wish to work with you and all Alaskans to move this great state forward,” he said.

Protester Will Hanbury Jr. of Sitka said he stood in protest because of the governor’s cuts to the state ferry system that’s critical for rural Alaska villages moving people and products.

“(He) doesn’t acknowledge the importance of our ferry system,” Hanbury said. “A lot of our tribal citizens need to travel by ferry to get to Juneau and the hospital in Sitka, and they can’t afford to fly.”

Met by a scrum of reporters after his speech, Dunleavy briefly answered questions before leaving the convention.

He seemed to take the protests in stride. He compared his situation to President Donald J. Trump’s.

“You have these things happen when you do speeches," he said. "A lot of governors do, president does. It’s part of the First Amendment, people expressing their rights.”

“I’m sure they didn’t agree with some aspects of the budget, and some programmatic decisions,” he said of the demonstrators.

The governor and First Lady also presented AFN’s Shirley Demientieff Award to Coaching Boys into Men Alaska, part of a national program implemented in many Alaska schools. It encourages coaches to mentor student athletes about respect, integrity and preventing violence.

The award is presented by the governor to an individual or group that works to improve the lives of Alaska Native women and children. The award focused on the program in Kake, a Southeast Alaska community.

“When Mike and I began looking for a worthy individual or program to award the Shirley Demientieff Award this year, we looked for somebody or something that is focused on training our next generation of Alaskans to be respectful toward each other and themselves," Rose Dunleavy said, speaking after the governor.

They quickly discovered the work being done by Coaching Boys into Men, she said. “It was an obvious choice.”