It’s unclear what U.S. restrictions on flights from China mean for cargo hub of Anchorage 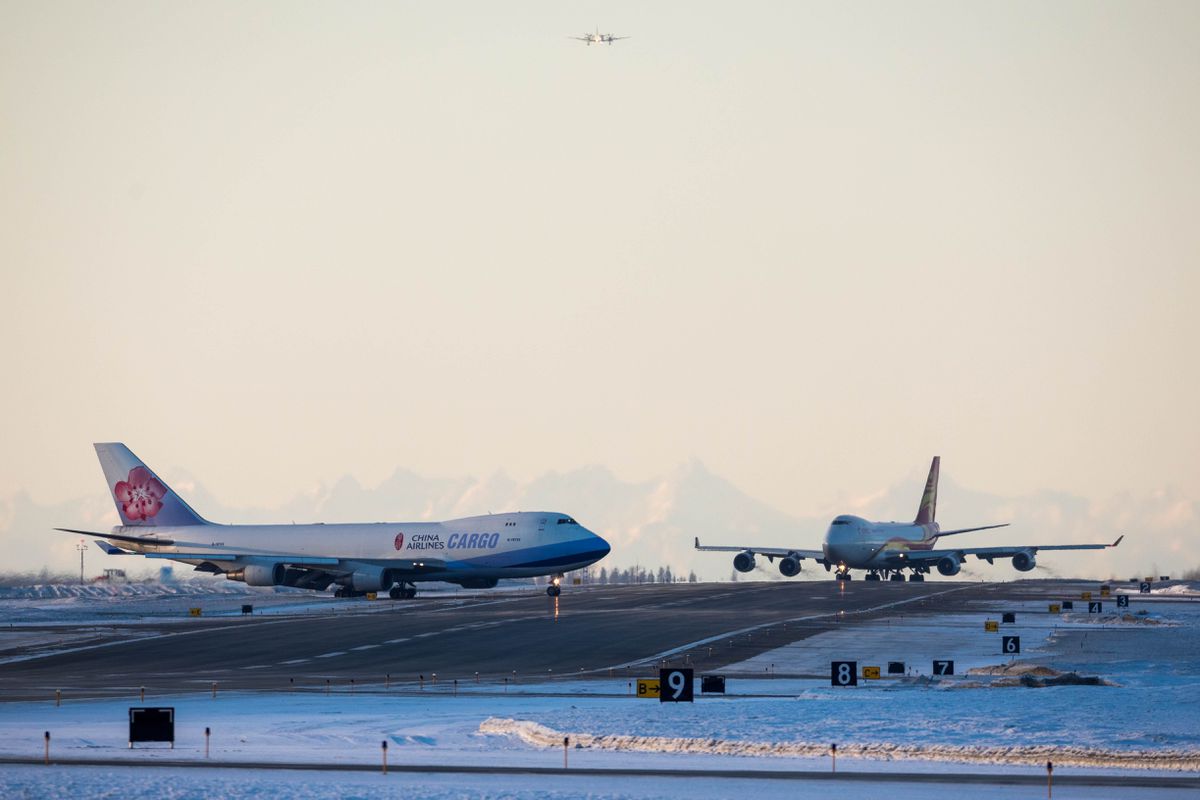 Cargo jets taxi at the Ted Stevens Anchorage International Airport on Friday, Jan. 11, 2019. The airport, Alaska's largest, is among the top five in the world for cargo throughput, according to the Alaska Department of Transportation. (Loren Holmes / ADN)

Cargo jets taxi at the Ted Stevens Anchorage International Airport on Friday, Jan. 11, 2019. The airport, Alaska's largest, is among the top five in the world for cargo throughput, according to the Alaska Department of Transportation. (Loren Holmes / ADN)

White House officials announced new air travel measures affecting those entering the U.S. from China in an attempt to block the potential spread of coronavirus on Friday, but uncertainties remain when it comes to how those restrictions would impact Anchorage’s international air cargo hub.

Ken Cuccinelli, acting director of U.S. Citizenship and Immigration Services, said in a press briefing that beginning at 1 p.m. Sunday, all flights from China to the United States would be “funneled” through seven airports around the country.

Ted Stevens Anchorage International Airport was not listed as one of the seven airports where passengers will be sent. Airports in New York, Chicago, San Francisco, Seattle, Atlanta, Honolulu and Los Angeles will receive flights from China starting Sunday.

It wasn’t immediately clear whether cargo flight routes from China to Anchorage would be affected by the White House’s announcement.

On Saturday, airport manager Jim Szczesniak said by email that the Anchorage International Airport has Centers for Disease Control and Prevention personnel onsite.

“In the event of a cargo flight from China, the special protocols in use at other US airports will also be used at ANC for flight crew,” Szczesniak said.

On Saturday, the Alaska Department of Health and Social Services reiterated that there were no suspected or confirmed cases of coronavirus in the state of Alaska.

Beginning Sunday afternoon, any U.S. citizen who enters the country from China or has been in China within the previous two weeks will be screened for the virus and then continue with up to 14 days of “monitored self-quarantine” to evaluate whether they show symptoms of the virus that originated in the city of Wuhan, China, and was declared a public health emergency by the World Health Organization on Thursday.

Additionally, any U.S. citizen who has been in Hubei province, where Wuhan is located, in the previous two weeks would be “subject to up to 14 days of mandatory quarantine,” White House officials said during the briefing Friday.

And starting Sunday, officials also said that foreign nationals who have been in China in the past two weeks and aren’t permanent residents or immediate relatives of American citizens wouldn’t be allowed to enter the U.S.

Earlier in the week, the CDC had designated Anchorage as one of 20 airports with already-established quarantine stations that would screen for the virus.

On Thursday, before the White House announcements, cargo flights from China were still landing in Anchorage, but the airport had suspended all cargo flights from Wuhan, the city where the outbreak began, Szczesniak said Thursday.

The airport has no passenger flights arriving from China, he said.

Daily cargo flights from the Chinese cities of Shanghai, Zhengzhou and Guangzhou regularly arrive at the Anchorage airport, though it varies from day to day and depends on the season, Szczesniak said.

The CDC quarantine station is in the North Terminal of the airport, where cargo crews coming into the U.S. are processed through U.S. Customs and Border Protection, Sczczesniak said.

The quarantine stations have always screened for ill passengers coming into the country, said CDC official Nancy Messonnier during a phone briefing with reporters Thursday. But the CDC is ramping up efforts to screen for the virus, she said.

“We are surging staff to those areas to enhance the ill traveler response capacity,” Messonnier said.

Tuesday evening, a government-chartered flight of Americans evacuating from Wuhan briefly landed at the isolated North Terminal of the Anchorage airport as the plane refueled.

Passengers were screened twice for the virus before the plane eventually departed to its final destination in Southern California. No one aboard the flight presented symptoms of the illness.

The U.S. is planning to evacuate more Americans from Wuhan, the Washington Post reported Thursday.

Szczesniak said that the type of plane determines whether it would need to stop for refueling in Anchorage. On Thursday, he said he had not been informed of any other evacuation flights scheduled to stop in Anchorage.

“If they get a plane that’s capable of flying nonstop from wherever in China they’re coming from to wherever in the United States they need to go, then that might be one of the reasons why they wouldn’t have to stop here,” Szczesniak said.

In 2003, a crew member from a cargo flight that landed in Anchorage was found to have symptoms of Severe Acute Respiratory Syndrome, or SARS. The crew member was monitored by state and local health officials for two weeks while he was cared for at a hospital in Anchorage, a statement from the state health department noted at the time. The crew member did not have SARS.

Bruce Chandler, chief medical officer at the Anchorage Health Department, said that although the situation is fluid, “there are no cases in Alaska, so there’s absolute zero chance of contracting coronavirus now in Alaska.”

Chandler conveyed that the flu is a much bigger concern.

“While many are fixated on the daily coronavirus death counts, we ignore the much greater risk posed by influenza — many people can’t be bothered to get a flu shot, despite the fact that we’ve already had over 8,000 flu-related deaths in the U.S. this year,” Chandler said.