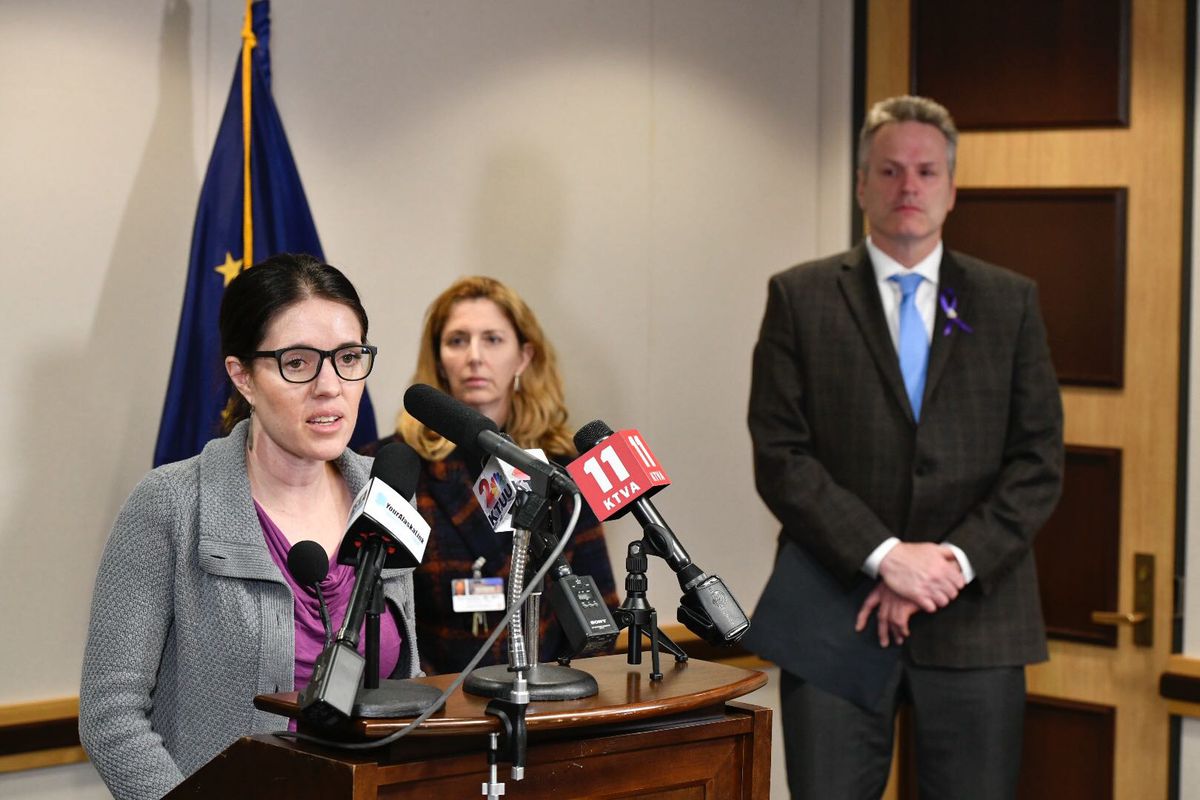 Update, 8 p.m. Friday: Alaska state medical director on Friday identified Alaska’s first confirmed illness caused by the new strain of coronavirus as a cargo plane pilot. Previously, state officials had only said the person was from a cargo plane that had landed in Anchorage this week. See our updated story.

Alaska’s first confirmed illness caused by the new strain of coronavirus was disclosed Thursday by state officials, who said the man arrived in Anchorage on a cargo flight, was tested and treated at a local hospital and is now in stable condition and in quarantine here.

The man, who wasn’t identified, had traveled to Alaska in the past 48 hours, she said. The man had not been interacting extensively in the community, she said. A spokesman for Gov. Mike Dunleavy later said he was from a cargo plane that had landed in the city.

A statement late Thursday from the Alaska Department of Transportation and Public Facilities, which operates the airport, said the man “developed a fever and respiratory symptoms shortly after arriving in Anchorage March 11. The patient immediately contacted their physician and then went to Alaska Regional Hospital for testing.”

It wasn’t immediately clear whether the man was a crew member or what the status was of others on the cargo flight. Officials declined to name the company involved.

“This is an isolated case” that officials believe they can contain, Zink said, because he came into contact with so few people here, she said.

He was treated at Alaska Regional Hospital, said Dr. Keri Gardner, chief medical officer for the hospital. Zink, who said he was discharged, described his condition as “stable,” “doing quite well” and not life-threatening.

Gardner said health care workers donned “fully protective gear,” and that they did “not know of any exposures that took place as a result of this patient arriving to the emergency department.”

He is now in isolation in Anchorage, though officials declined to provide details about that. It’s less of a threat in Alaska than a community-transmitted case, officials said, because the individual self-isolated.

Jeff Turner, a spokesman for Dunleavy, said the man was from a private cargo plane but provided no more details. The Anchorage airport is a hub for international cargo flights.

Zink said the man was otherwise in good health, but officials declined to provide other details, including where he was from, his age and where in the city he had gone. The man self-isolated as soon as he began experiencing symptoms and asked to be tested, she said.

“They had been watching themselves because they knew that they were an international traveler,” Zink said. “And as soon as they started to develop some symptoms that were concerning, including a fever, they called and made appropriate arrangements to get tested...From what we’re hearing from this patient, they did an amazing job of incredibly self-isolating.”

She described him as “incredibly kind and cooperative. ... My heart goes out to this individual as they are suddenly here,” far from friends and family.

Epidemiologists are documenting the man’s travel history and who he had contact with over the last two weeks, she said. The individual “was traveling quite a bit internationally,” Zink said, but epidemiologists are still working to figure out where he may have contracted the illness.

From what epidemiologists knew Thursday, they didn’t have “any significant concern,” that anyone else in the state was exposed to the illness, Zink said.

The case was identified on Thursday afternoon, Gov. Dunleavy said. “This just happened a couple hours ago,” he said.

Dunleavy said Alaskans should expect more cases and urged them to take steps to reduce risk.

“This is not a surprise,” he said. “We expect more positives."

The governor told reporters at Thursday’s briefing that “there’ll probably be people in this room that will be infected by the virus.”

Speaking to news media on Monday, Dunleavy called the emergence of the new coronavirus — alongside a plunging stock market, the drop in oil prices and federal officials warning Americans to stay away from cruise ships — as "a momentary glitch.”

Asked about the “momentary glitch” comment Thursday, Dunleavy said, “It’s not an issue that we believe, at this stage of the game, is going to be of such severity that we really have to raise a level of urgency or concern to a high degree,” but he added that the state would continue to reassess its current protocols.

Nationwide, confirmed case numbers continued their ascent, with 1,215 confirmed cases and 36 deaths from the diseases, the CDC reported Thursday.

The symptoms of COVID-19 include shortness of breath, fever and cough.

An outbreak of the novel coronavirus, a virus known as SAR-CoV-2 that causes COVID-19, began in Wuhan, China, but has since spread to several countries worldwide.

If you are sick, the CDC recommends you stay home and call your health care provider to describe the symptoms you might be experiencing.

What questions do you have about the coronavirus?