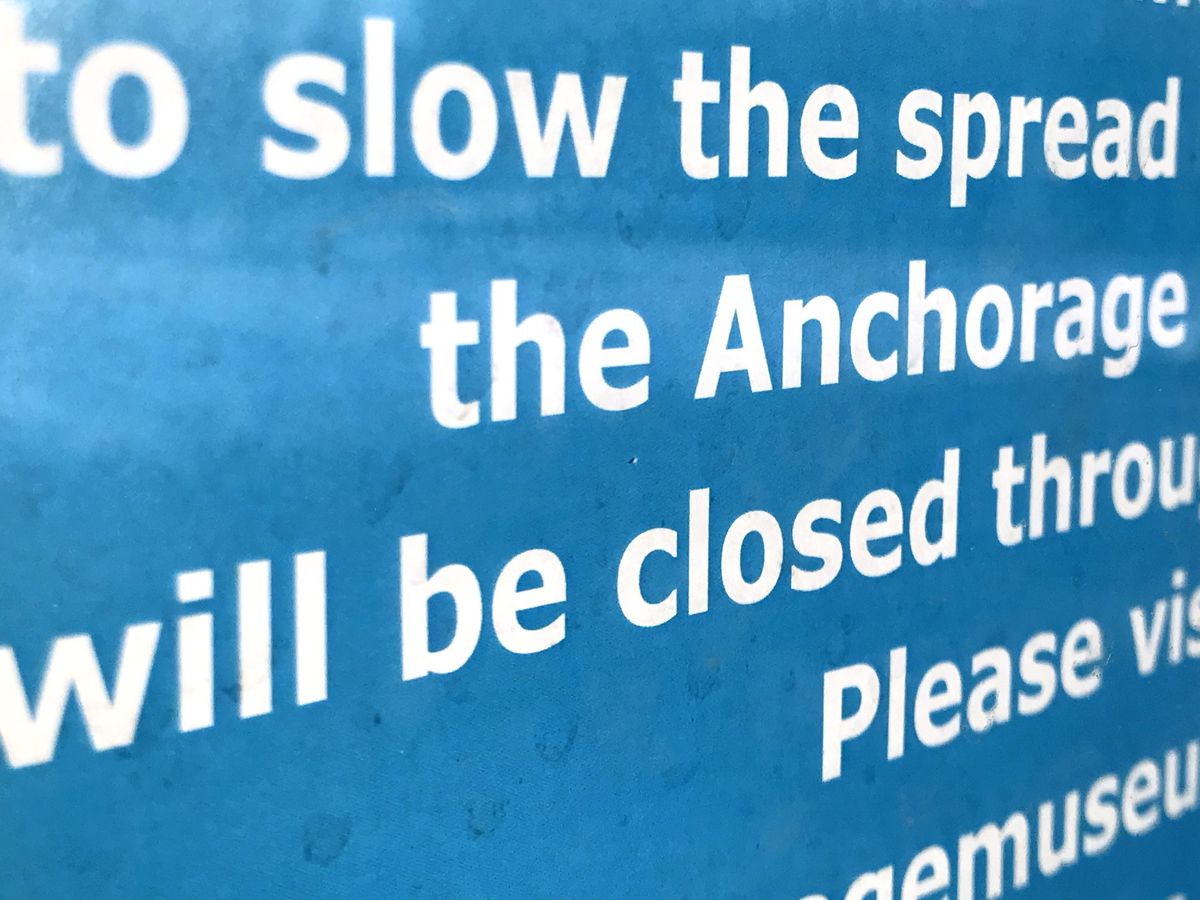 After the confirmation of Alaska’s first novel coronavirus case, a cascade of closures and cancellations rippled through the state this week as officials and others sought increased precautions against the spread of the virus.

State officials enacted a two-week closure for Alaska public schools, the state Capitol in Juneau closed to the public and the Municipality of Anchorage shut down several public spaces. Events of all sizes were being canceled across the state, including concerts, conventions and major sporting events.

The news moved at near-dizzying speeds on Friday, as new closures were announced by the hour.

The decisions are all part of an effort to slow the spread of the new coronavirus, which causes a disease known as COVID-19. The upper respiratory illness is spread through droplets, like coughs and sneezes, and public health experts recommend that the best way to stop its spread is social distancing and hand washing.

State officials on Thursday announced the state’s first positive case of COVID-19: a cargo pilot who had traveled to the Ted Stevens Anchorage International Airport before being admitted and later discharged from Alaska Regional Hospital. He’s now in stable condition, isolated from others, and health officials believe they can contain the case, Alaska’s chief medical officer Dr. Anne Zink said.

As of Saturday, it was the only confirmed case of the virus in Alaska. According to state officials, 143 others had tested negative for COVID-19 as of Friday.

On Friday, Gov. Mike Dunleavy announced the suspension of classes at all of the state’s public elementary, middle and high schools through March 30. The governor said schools would instead have “non student contact days," which means teachers will still come into school for in-service days but students will stay home.

That followed an earlier announcement by some school districts, including Anchorage and the Matanuska-Susitna Borough, that classes would not resume on Monday after spring break, and that preparations would begin to offer instruction online to students if schools needed to be shut down longer.

Department of Education commissioner Michael Johnson said that the state had received a waiver from the federal Department of Agriculture that allows school districts to continue serving meals to students.

“We’re encouraging them to work with the department to establish sites to distribute meals to children,” Johnson said.

On Friday, nine of Alaska’s school districts had “submitted feeding plans,” Johnson said during the briefing.

One adult visitor is allowed per resident each day at the homes, and visits are limited to that resident’s room. In addition, visitors will submit to a “robust health screening,” according to the governor. The screenings check for symptoms of the virus and ask whether visitors have been in contact with someone being investigated for COVID-19, Dunleavy said.

On Saturday, the Anchorage Fire Department announced it would limit access to fire stations, canceling tours and other events as well as ride-alongs.

“The department is limiting public access to the stations to essential services only,” the fire department said in a statement. “If you believe you have COVID-19 contact your medical provider or call 211 for a referral. Do not call 911 or stop by a fire station unless you have emergency complications and need immediate medical assistance.”

On Friday, AFD announced that three staff members were self-isolating and monitoring themselves for symptoms of COVID-19. The three had assisted the individual who later tested positive for the virus.

Staff from the Anchorage Health Department will be checking on each of the employees twice a day by phone, AFD said.

On Friday, Anchorage Mayor Ethan Berkowitz announced the closure of city facilities where large groups might congregate. The Matanuska-Susitna Borough said Friday that it’s closing all government buildings to public access and suspending meetings through April 1 (that includes government offices, the Brett Ice Arena, borough libraries and swimming pools). The City and Borough of Juneau announced similar closures for its public facilities on Saturday.

The Anchorage closures run through at least March 31. They include all municipal libraries, the Anchorage Museum, the Egan and Dena’ina Convention Centers, Sullivan Arena, municipal recreation centers (Mountain View, Fairview, Spenard), the Alaska Center for the Performing Arts, all municipal pools, the Eagle River Town Center building and all municipal ice rinks, among others.

The push to limit large public gatherings in Anchorage spread to organizations as diverse as The Dome indoor sports facility — which announced that it would close through March 30 — and churches. Bishop Andrew Bellisario of the Archdiocese of Anchorage announced that there would be no public celebration of Mass or other large gatherings across the archdiocese through March 27.

“Today’s directive was made for the common good and for the people of God entrusted in our care — many of whom are considered high risk and vulnerable,” Bellisario said in a statement. “We must do our part to slow down this epidemic.”

ChangePoint Alaska announced that it would live stream some worship services Sunday. Anchorage Baptist Temple said it will postpone its Sunday evening and Wednesday evening services.

The city is also bracing for the potential spread of COVID-19 to those in Anchorage who are experiencing homelessness.

The need for emergency housing could extend beyond the homeless to people who get stranded in Anchorage, such as tourists or flight crews, or at-risk seniors.

Zink, the state’s chief medical officer, said the foreign national who tested positive for COVID-19 in Alaska is being housed in an undisclosed location in Anchorage, provided as part of the city’s coronavirus preparations.

The state Department of Corrections announced Friday the suspension of visitors to its prisons and jails. The department also announced enhanced sanitation measures.

Gallagher said the department had “sufficient capacity” to isolate inmates who might be ill, and quarantine others who might have come into contact with someone who has an infectious illness.

As of Friday, there were 4,781 inmates in Alaska’s correctional system, which is 98.1% of the system’s capacity, Gallagher said.

Lawmakers closed the Alaska State Capitol in Juneau to the public Friday and also closed Legislative Information Offices around the state to in-person assistance.

“Effective immediately, access to the State Capitol will be limited to lawmakers, employees of the Legislature, members of the governor’s administration, and credentialed journalists,” said a written statement issued by Sen. Gary Stevens, R-Kodiak and signed by the Legislature’s leaders.

On Sunday, the chief justice of the Alaska Supreme Court suspended all new jury trials statewide for the week of March 16 “and thereafter pending further order.”

Editor’s note: This article has been updated to reflect the suspension of all new jury trials statewide.