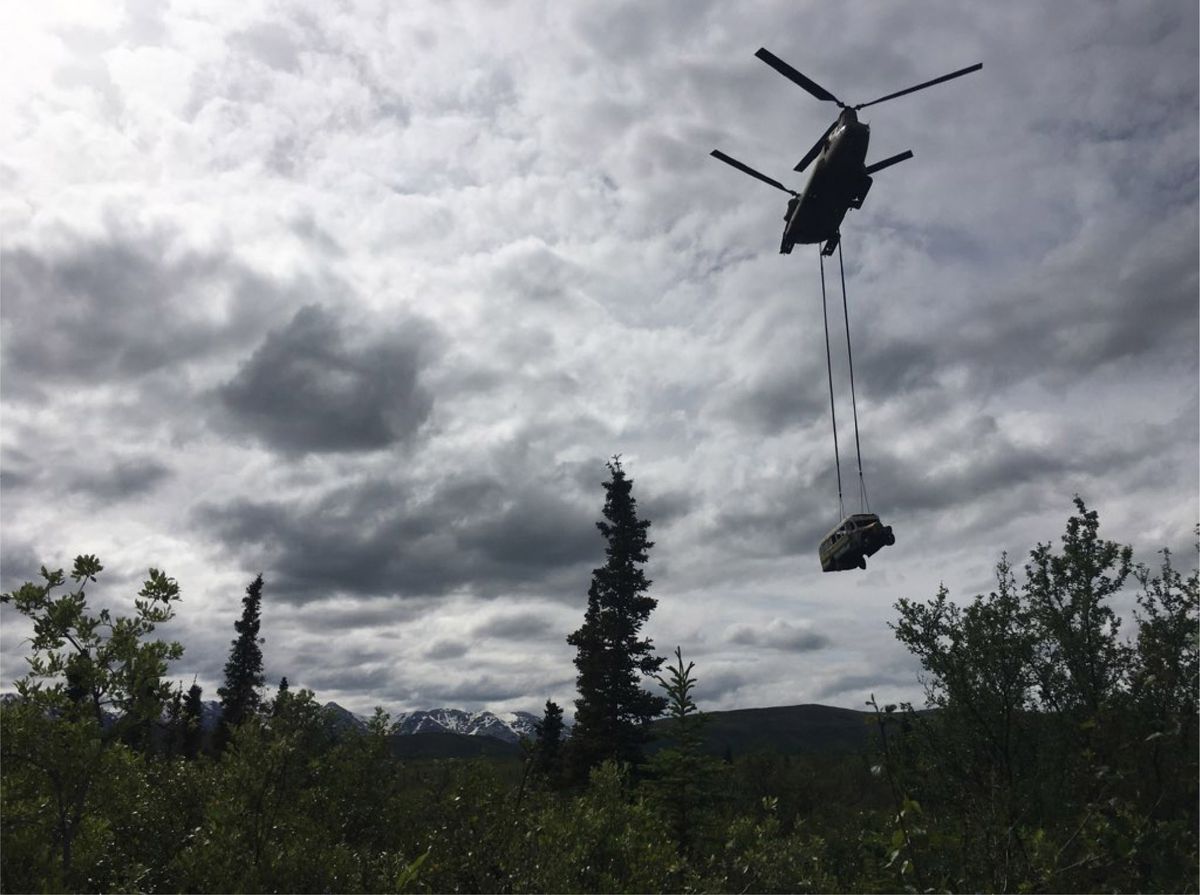 The distinctive silhouette of a bus made famous by the "Into the Wild" book and movie traverses the skies today near Stampede Trail, as an Alaska Army National Guard CH-47 Chinook helicopter moved it from its decades-long resting place west of the Parks Highway shortly before 1 p.m. June 18, 2020. (Dept. of Natural Resources photo)

The distinctive silhouette of a bus made famous by the "Into the Wild" book and movie traverses the skies today near Stampede Trail, as an Alaska Army National Guard CH-47 Chinook helicopter moved it from its decades-long resting place west of the Parks Highway shortly before 1 p.m. June 18, 2020. (Dept. of Natural Resources photo)

An infamous abandoned bus near the boundary of Denali National Park and Preserve that has attracted travelers for years, prompting several rescues and deaths, was airlifted Thursday from its location west of the Teklanika River.

The bus had sat at its location, about 25 miles west of the Parks Highway on the Stampede Trail, for 60 years. It was the site of the 1992 death of 24-year-old Virginian Christopher McCandless, which was depicted in the 1996 best-selling book “Into the Wild” that was later adapted into a feature film.

Since then, the bus has drawn visitors — some of them following in McCandless’ footsteps — with varying levels of preparedness for enduring wilderness conditions and crossing the swift Teklanika River. Some local officials have long called for its removal.

“It’s a little bittersweet, honestly,” said Denali Borough Mayor Clay Walker. “We know it’s the right thing to do for public safety, yet at the same time I watched it go down the Stampede Road, it does feel like a piece of your history moving on.”

The bus was airlifted out and placed onto the back of an Alaska Department of Transportation flatbed truck, Walker said. Its removal was a coordinated effort between the Alaska Department of Natural Resources and the Alaska Army National Guard, which took on the job as a vehicle airlift training mission at no expense to the state, Natural Resources Commissioner Corri Feige said in a statement.

The bus will remain in storage at a secure location, and the state is considering options for its permanent placement, Feige said.

[‘Into the Wild’ author torn over removal of iconic bus: ‘I wrote the book that ruined it’]

The removal of the bus comes in response to the public safety hazards caused by its presence and location, Department of Natural Resources spokesman Dan Saddler said.

Between 2009 and 2017, there were 15 bus-related search and rescue operations by the state, according to the natural resources department.

Saddler said he hoped its removal would “reduce injuries, search and rescues, loss and even death that have occurred in connection with this bus.”

Most recently, a 26-year-old Brazilian man was rescued from the area in April after running out of food and becoming trapped when ice over the Teklanika River melted and the rushing waters swelled. Five Italian tourists were rescued in February.

In 2019, a 24-year-old woman from Belarus died as she struggled to cross the river after spending two nights at the bus.

“It has long been a perilous attraction,” Walker said.

The 1940s-era bus — Fairbanks city bus 142 — was hauled to the spot by Yutan Construction Co. as a shelter for employees during a pioneer road construction project. It was abandoned when the project was completed in 1961, according to the state.

It soon became a destination for hikers, Walker said. But “its usefulness as a shelter had pretty much gone by as it was really dilapidated and in bad shape,” he said.

The bus, where McCandless stayed alone for more than 100 days until his death, was a magnet for travelers from around the world with differing levels of outdoor skill. The “Into the Wild” book has been translated into 30 languages

Soon after the death of Veranika Nikanava, the Belarus woman who died in 2019, family members proposed that the Denali Borough build a footbridge over the dangerous crossing. That proposal is what spurred the borough to take a formal stance on what should happen to the bus, Walker said.

“It’s a major crossing and a major hazard,” Walker said. The rescues require “significant expense of the state and time and energy of local responders.”

In March, the borough formally requested that the state remove the bus. From there, the Department of Natural Resources took the request under consideration.

“After studying the issue closely, prioritizing public safety and considering a variety of alternatives, we decided it was best to remove the bus from its location on the Stampede Trail,” commissioner Feige said in a statement.

Jon Krakauer, the author of “Into the Wild,” and Carine McCandless, Christopher’s sister, have previously expressed doubt that moving the bus would keep visitors from trying to reach the site.

On Thursday, a crew cleared brush and obstacles from the area, according to the Alaska Army National Guard. They then cut holes in both the roof and floor of the bus to secure chain kits to its frame before airlifting it with a CH-47 Chinook heavy-lift helicopter.

A suitcase with sentimental value to the McCandless family was also recovered, the Guard said.

Walker, the borough mayor, has said previously that the bus holds a lot of meaning for people and that he wanted to see it moved to a safer location on the other side of the Teklanika.

But for now, “it’s in the state’s hands,” Walker said Thursday. “We’ll be working through a process of what will happen to it next.”

The state, “is discussing possible plans to display the bus for the public to view at a safe location,” the statement from the National Guard said.

Correction: This story has been updated to reflect that the bus was located west of the Teklanika River, not on the west bank of the river.