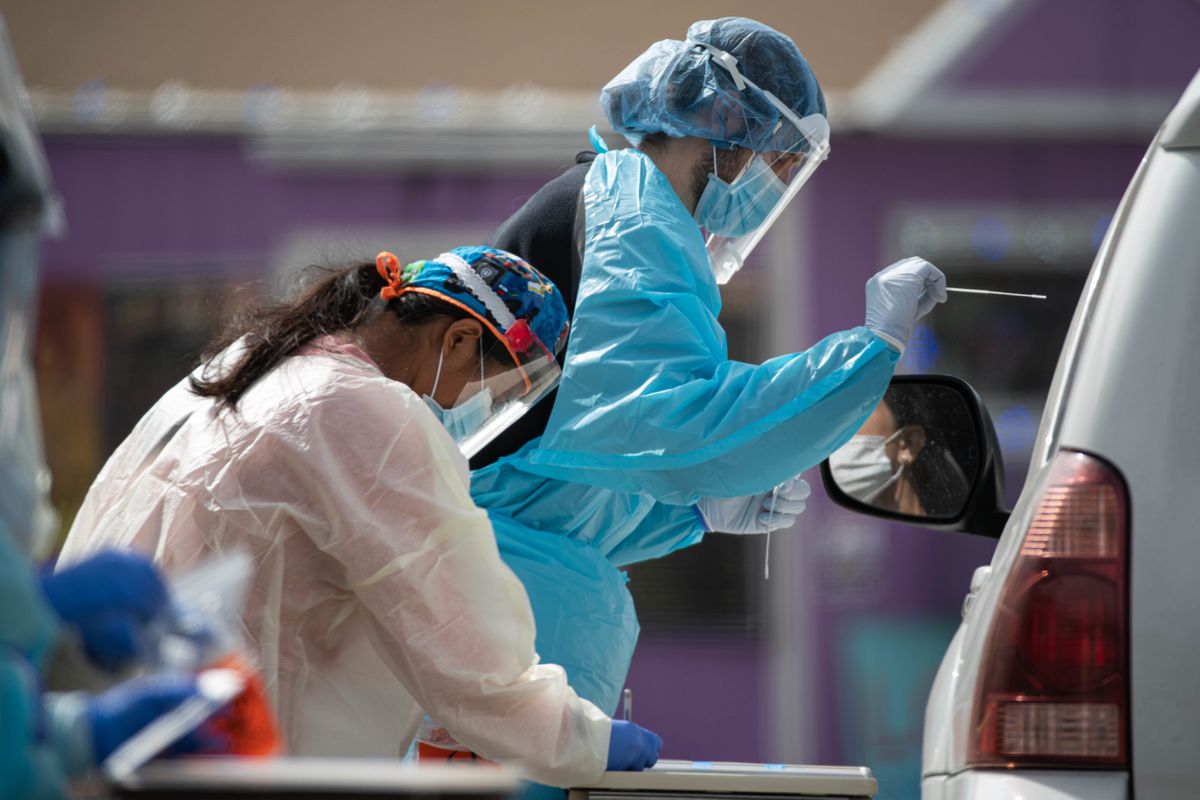 A combination of younger people getting the virus and limited outbreaks in care centers and prisons have so far kept hospitalizations and deaths relatively low here, officials said during a 90-minute briefing Monday. Other states also had COVID-19 outbreaks in meatpacking facilities but Alaska has so far avoided clusters in similar industries here such as seafood processing plants.

The state reported 71 new coronavirus infections across Alaska on Monday, one of the state’s higher totals since the pandemic began in March but a drop after days of record daily case counts.

Sixty residents and 11 nonresidents tested positive for COVID-19, the highly infectious disease caused by the virus, according to the Alaska Department of Health and Social Services COVID-19 dashboard updated Monday. That’s down from Sunday’s record daily count of 116 and 77 the day before.

In total, there have been 1,845 cases of the virus identified in the state. Nearly a third were confirmed in the past week, officials say.

The rising number of cases on Monday prompted the Alaska State Hospital and Nursing Home Association to warn that the state’s hospital capacity could be threatened by rising numbers of infected people.

Referring to other states that use a “hammer” to respond to the pandemic, the governor made it clear he planned to issue no statewide mandates at this point and urged Alaskans to voluntarily do everything they can to slow the spread of the virus, as he has several times before during prior briefings.

Dunleavy several times noted that 17 Alaskans have died with COVID-19 while the state has reported “well over 1,800 deaths from other causes.” He said it was also important to keep the state’s economy running and make sure hospitals stay open to provide medical care.

“It’s that balance. We will adjust where we need to. We’re watching our numbers. We still look fairly good,” he said. “In Alaska, we never just did what others did because this virus manifests itself differently at different times.”

There were 18 people hospitalized with COVID-19 around the state Monday, according to Dr. Anne Zink, the state’s chief medical officer. That number was in the single digits until July 3.

New cases in young people in their 20s and 30s are driving the recent spike in positive cases, said Dr. Joe McLaughlin, the state epidemiologist. That’s also probably why the state’s hospitalizations and deaths aren’t rising as much as the case counts are.

“Are we concerned about the rise in cases? Yes. We’re definitely concerned about that. The thing that is really different though in Alaska is our hospitalization rates to date have been quite low, as have our ... death rates,” he said. “Those are a couple of metrics that we’re watching really closely. We know things can change very quickly.”

Another of those metrics is testing, and the percentage of tests that come back positive, Dunleavy said.

There were 146,590 tests completed as of Monday, with a 1.89% average positive rate over the last three days — a number that officials say is relatively low compared to other places.

“It’s really good to have a low percent positivity rate like we have, because it means you’re capturing more positives,” McLaughlin said. “It means you’ve got a robust enough testing protocol that you’re testing as many cases as you possibly can.”

Dr. Zink said that the state’s resourcefulness with making sure providers had enough supplies to test both symptomatic and asymptomatic people since the beginning of the pandemic has contributed to Alaska’s relatively low percent positive rate for tests, and its widespread testing.

“We’ve tried to make sure that particularly our rural and our vulnerable populations are protected, and we saw testing as a way to do that,” she said. “We worked closely with the governor and many others to be able to stand up a lot of additional supplies, being able to make our own swabs allowed us to get ahead of the game and do testing for symptomatic people.”

Dunleavy added that industry-specific testing of slope workers, and out-of-state employees in the fishing and mining industries, has helped minimize the risk of bringing higher rates of the virus to Alaska.

“Our goal is to keep working on ensuring that we can test as many Alaskans as possible,” Dunleavy said.

Of the new resident cases reported by the state Monday, 34 occurred in Anchorage, including three in Chugiak, two in Eagle River, and one in Girdwood.

The Anchorage Police Department on Monday announced a department employee tested positive for the virus after a notification of a “potential exposure involving our employees” on July 10. Following the notification, the department quarantined and tested additional employees who may have been exposed. Test results Sunday came back positive for one employee.

The state also reported the first resident case in Utqiagvik on Monday. There are now five COVID-19 cases in the North Slope Borough.

Of the 11 new nonresident cases, there were eight in Anchorage, two in Fairbanks, and one in Kenai.

The state dashboard identified one new hospitalization on Sunday, for a total of 87 people ill enough to require hospital care since the pandemic began.

Of the 1,845 people who have tested positive for the virus since March, 1,135 are considered active cases, meaning they are still contagious. The state has said 693 people have recovered.

In Anchorage, where cases are spiking, Mayor Ethan Berkowitz encouraged the public to continue abiding by public health guidelines, including wearing a mask in public, staying six feet apart from those not in your household, washing hands regularly, and keeping social bubbles small.

“We must defend our hospital capacity,” he said.

The Anchorage Office of Emergency Management sent out an alert with a few other ways locals can help slow the spread of the virus.

The department encouraged residents to work from home whenever possible, and help the city’s contact tracing efforts — which are currently overwhelmed — by keeping a 14-day log of the “date, time, places, and people you come in contact with.”

Businesses and organizations could also help by tracking the dates, times, and phone numbers of their patrons.

“A simple list can make a big difference to prevent further spread if you become sick with COVID-19,” the notification said.

In a Facebook post on Sunday, Dr. Anne Zink, the state’s chief medical officer, noted that while it is difficult to know the percentage of symptomatic and asymptomatic cases, out-of-state cases are “more likely to be asymptomatic than our state cases,” because nonresidents tend be tested when they travel or through their industry, whereas residents are more likely to get tested because they have symptoms.

“There is clearly a trend towards younger adults [in recent cases],” Dr. Zink added.

Three quarters of the new resident cases occurred in people under the age of 40.

[Watch the state briefing from Monday:]