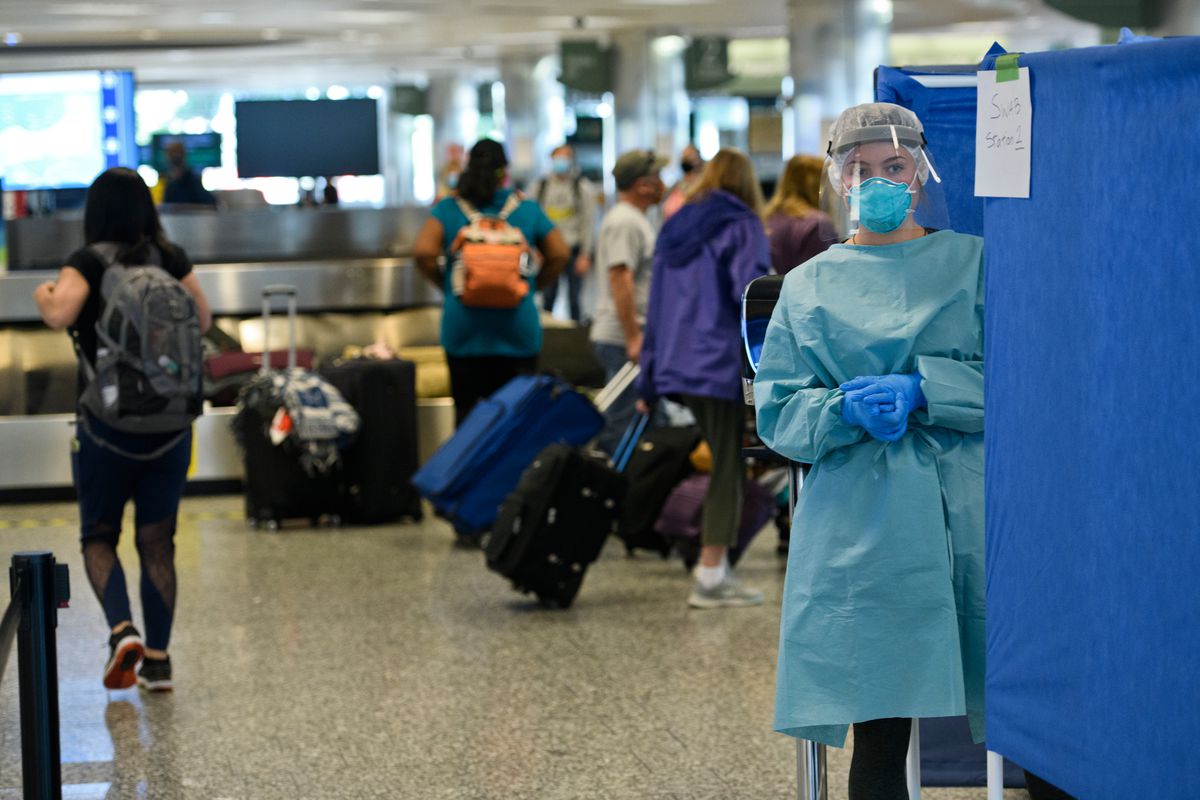 Younger people make up a large portion of the state’s recent surge in coronavirus infections, and health officials are making increasingly urgent calls for them to take action to limit further spread.

The state reported 57 new COVID-19 cases and four more hospitalizations on Wednesday, according to the Alaska Department of Health and Social Services COVID-19 dashboard.

“Far and away the majority of the cases that we’re seeing that are contributing to the big spike in cases that we’re having is in young adults,” state epidemiologist Dr. Joe McLaughlin said during a science briefing Wednesday.

McLaughlin said he went for a hike out of Glen Alps on Tuesday, where he saw a group of eight or nine people — likely in their 20s — close together at the trailhead.

“None of them had masks on and nobody was social distancing,” he said.

Officials don’t know exactly why young people make up such a large portion of recent cases, but McLaughlin said it’s possible young adults may be “less compliant” with measures like social distancing, wearing masks, hand washing and post-exposure quarantine. They might also be more likely to go to parties, bars and restaurants or to go into work in an office, McLaughlin said.

He said the department is trying to make sure that young people understand “the importance of doing their part.” Just like everyone, young people play an important role in the transmission of the illness, he said.

National data shows that the rate of people hospitalized with the illness per 100,000 population is lower for younger people, but that doesn’t mean young adults are safe from COVID-19.

“Even though we know that younger people tend to have less severe disease and oftentimes tend to be more likely to be asymptomatic, there are still cases that wind up being severe enough for hospitalization,” McLaughlin said.

And young people “can and do die from COVID-19,” McLaughlin said, especially those who are considered “high risk” and have underlying medical conditions.

The state flattened its coronavirus curve by May, with single-digit daily increases if any, but cases began started rising again in June and July after most pandemic restrictions lifted for businesses. New cases jolted upward in recent weeks reaching a record on Sunday, with 116 new cases reported in a single day. The state recorded 71 new cases of the virus on Monday and 54 new cases on Tuesday.

Active cases of the virus reached 1,179 total by Wednesday among both residents and nonresidents, while 760 people had recovered from the illness statewide.

State data showed 156,093 tests had been completed in Alaska by Tuesday. Over the last three days, the average positive rate among test results was 1.6%.

More testing does detect more cases of the virus, McLaughlin said, but Alaska is seeing more cases and that’s not just due to the increase in testing.

“Make no mistake, there is a shift in the epidemiology,” McLaughlin said. “We are seeing more cases in younger populations, and our case counts are increasing here in Alaska as well as in the United States.”

In Anchorage, there were 31 new cases of the virus among residents, two in visitors and one in nonresident who works in tourism, according to state data. There were also three cases among Eagle River residents.

In Mat-Su, there were two cases among Wasilla residents and one case in someone from Willow.

There were also six new cases in Fairbanks residents and two in people from the Yukon-Koyukuk Census Area.