After millions spent and a blizzard of ads, Sullivan and Gross make final blitz in Alaska U.S. Senate race 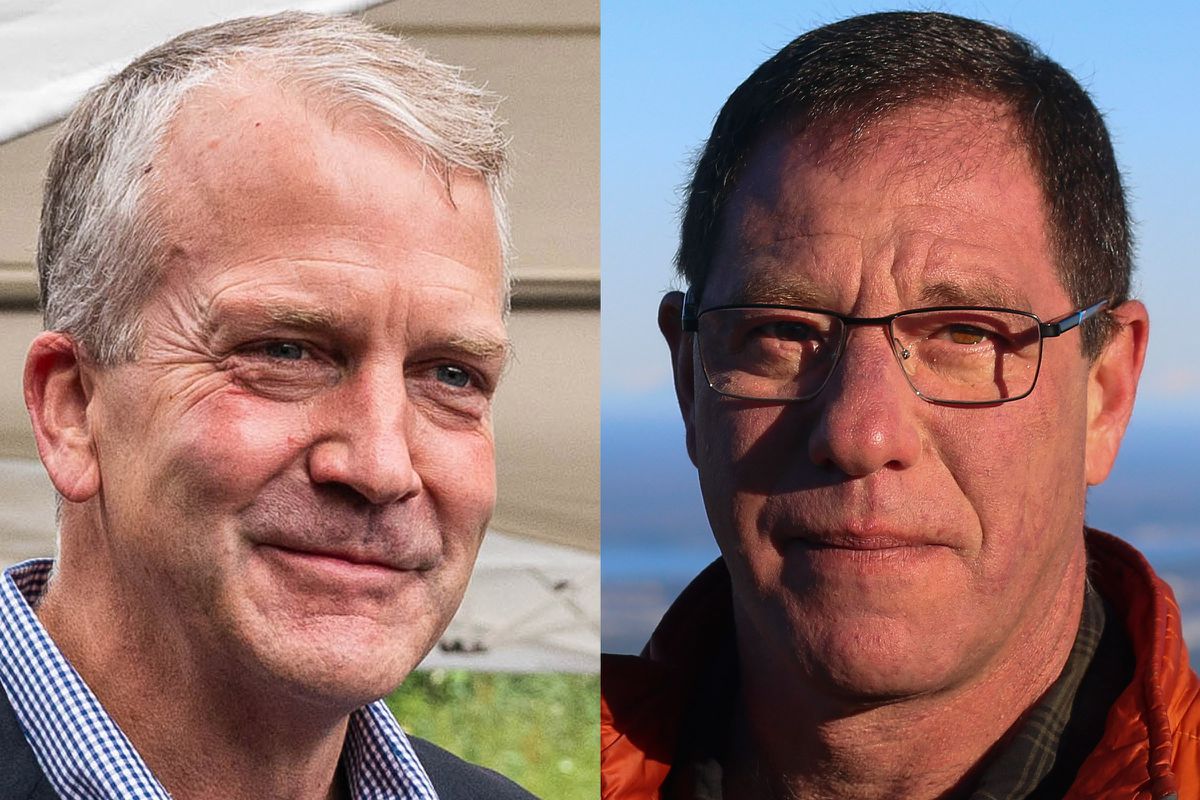 Republican Dan Sullivan and challenger Al Gross, an independent running with the Democratic nomination, are traversing the state in the final days of the campaign for U.S. Senate — an in-person push to accompany a torrent of TV commercials, digital ads and mailers.

The Sullivan-Gross race has garnered snowballing attention nationally, in large part because it’s on a shortlist of races believed to have the potential to flip the Senate from Republican to Democratic control.

“This race has really boiled down to control of the United States Senate,” said Sullivan’s campaign manager, Matt Shuckerow.

The work from both sides will continue relentlessly until Tuesday night.

Gross, an orthopedic surgeon and former commercial fisherman who has not previously held office, is currently on a weeklong tour of the state, stopping in Fairbanks, the Kenai Peninsula, Southeast Alaska and ending Sunday at a rally in the Mat-Su area.

Sullivan, a Marine and former Alaska attorney general and natural resources commissioner, is seeking his second term. Sullivan is also traveling the state, stopping in many of the same areas.

Both campaigns have people, wearing masks, out knocking on doors and talking with potential voters. Shuckerow said the campaign made 120,000 calls last week, and is also sending text messages.

“We want to make sure people get out and vote,” Shuckerow said. “We don’t take anything for granted."

[Where to cast your ballot, how to make sure it’s been counted, how to learn about issues and candidates]

With the campaigns combined spending almost $21 million as of Oct. 14, and outside groups spending about $27 million more, it’s already among the most expensive statewide races in Alaska’s history. In 2014, more than $61 million total was spent as Sullivan defeated then-incumbent Sen. Mark Begich, including money outside groups spent on them.

Less than a year ago, Gross was far from a household name. Now, after spending more than $14 million, Alaskans know him as the “Bear Doctor,” thanks to a campaign jingle heavily advertised on YouTube and other platforms.

Gross is not a registered Democrat, but he’s running with their nomination, and said he would caucus with Democrats if elected.

On the ballot, Gross is listed as the “Democratic nominee,” with no indication of his independent status, following a ballot design change that was legally challenged but ultimately upheld by the Alaska Supreme Court in September. (The Gross campaign called the design change “arbitrary” but didn’t participate in the court battle.)

Shuckerow said the battle over Senate control plays in Sullivan’s favor. When the Senate was previously controlled by Democrats, they took steps to stifle resource development in Alaska, he said.

Keith said there is momentum right now to go after Senate Republicans.

“There’s a lot of appetite out there to defeat incumbents like Dan Sullivan who have done nothing to be a check on the president,” Keith said.

Asked about the influx of attention and money due to Democrats seeing an opportunity to take back the Senate, Keith said people have various reasons for donating money. Keith said Gross worked hard to introduce himself to voters, traveling the state to build up name recognition.

“We saw so much energy around Al’s candidacy when Al was just very clear with people who he was,” Keith said. “He’s not a politician, he’s just an Alaskan.”

Keith and Shuckerow both said they expected a tough race from the beginning. But at first, Gross was a relatively unknown candidate and most national projections largely favored Sullivan.

Shuckerow said he noticed a change in July when outside groups started spending millions on ads benefiting Gross. One of the first was The Lincoln Project, a group of anti-Trump Republicans who in late July spent more than $1 million promoting Gross. According to the Center for Responsive Politics, that group has now spent more than $4 million on Gross' behalf.

[The Alaska Division of Elections hired over 900 people to facilitate voting in Anchorage this year. Meet one of them.]

“I think it was at that moment, you had millions and millions of dollars being spent by third-party dark money groups,” Shuckerow said. “That really did kind of change the race a bit.”

Joelle Hall, director of operations for the Alaska AFL-CIO, which endorsed Gross, said his campaign built a machine and masterfully executed a campaign in a time when normal campaign tactics like door-knocking are less relied on.

“This part is unprecedented," she said. "People are calling, writing letters to their own friends. People have tried to do this in the past, but I think the pandemic has kind of forced this.”

Both campaigns have ramped up their attacks. The Sullivan campaign often characterizes Gross as a liar. Sullivan routinely in debates said Gross is giving one policy position to the public while telling another to national Democrats he’s soliciting donations from.

The Gross campaign has painted Sullivan as corrupt, saying he votes in ways that benefit his family’s large chemical company and that he’s in the pocket of industry.

Art Hackney, a veteran Republican political operative, said the messaging has been intense.

“(Sullivan’s) a guy who’s walking home from church and a bunch of thugs come out of the alley and start hitting him with baseball bats,” Hackney said.

Hall said there is more of everything — mailers, calls, texts and commercials — but the normal person is so busy working, cooking dinner and taking care of their children to absorb much of the noise.

“What feels overwhelming to a political hack like me may just be piercing the veil," she said.

Keith said while some of the Gross ads are positive, like the “Bear Doctor” messaging, “drawing a contrast with somebody like Dan Sullivan is the key here, and I am hopeful it’s going to be one of the reasons we are going to be victorious.”

That money has allowed both campaigns — but especially Gross’ — to bombard potential voters with TV commercials, flyers and internet ads.

Shuckerow said internal polling has always shown Sullivan with a “significant” lead, but they did see the impact of the millions pouring into Gross' campaign coffers.

“We saw the polling reflect that people took a moment to reflect and ask themselves what was going on,” Shuckerow said. “We did see a small shift to an undecided sort of camp. It wasn’t a shift toward Al Gross.”

Shuckerow said the polls have since rebounded.

Keith said there have been many shifts in the race, and one of them was their use of ousted Pebble Limited Partnership CEO Tom Collier in campaign ads.

In secret recordings released by an environmental group in September, Collier told people posing as potential investors that Sullivan was misleading the public about his stance on the controversial mine as he ran for reelection, saying the senator was “off in a corner being quiet” — a phrase the Gross campaign deployed in an onslaught of ads.

Sullivan quickly denounced the statements as false and put out a strident statement: “I oppose Pebble Mine. No Pebble Mine.”

“Polling definitely shows Pebble mine is one of the most contentious issues in the state,” Keith said.

Keith said in the final days, the campaign will push a variety of ads.

On Friday, the Sullivan campaign released a new attack ad, claiming Gross hides how liberal he is. But Shuckerow said the emphasis in the final days will be on a less combative commercial. In the ad, Sullivan talks about his record on jobs and resource development in Alaska.

“He talks about his commitment to Alaskans, standing up for our future, our jobs,” Shuckerow said. “It’s a very positive piece.”

Correction: An earlier version of this story incorrectly quoted what Tom Collier said of Sen. Dan Sullivan in secret recordings released by an environmental group. Collier said Sullivan was “off in a corner being quiet," not “hiding in a corner.”