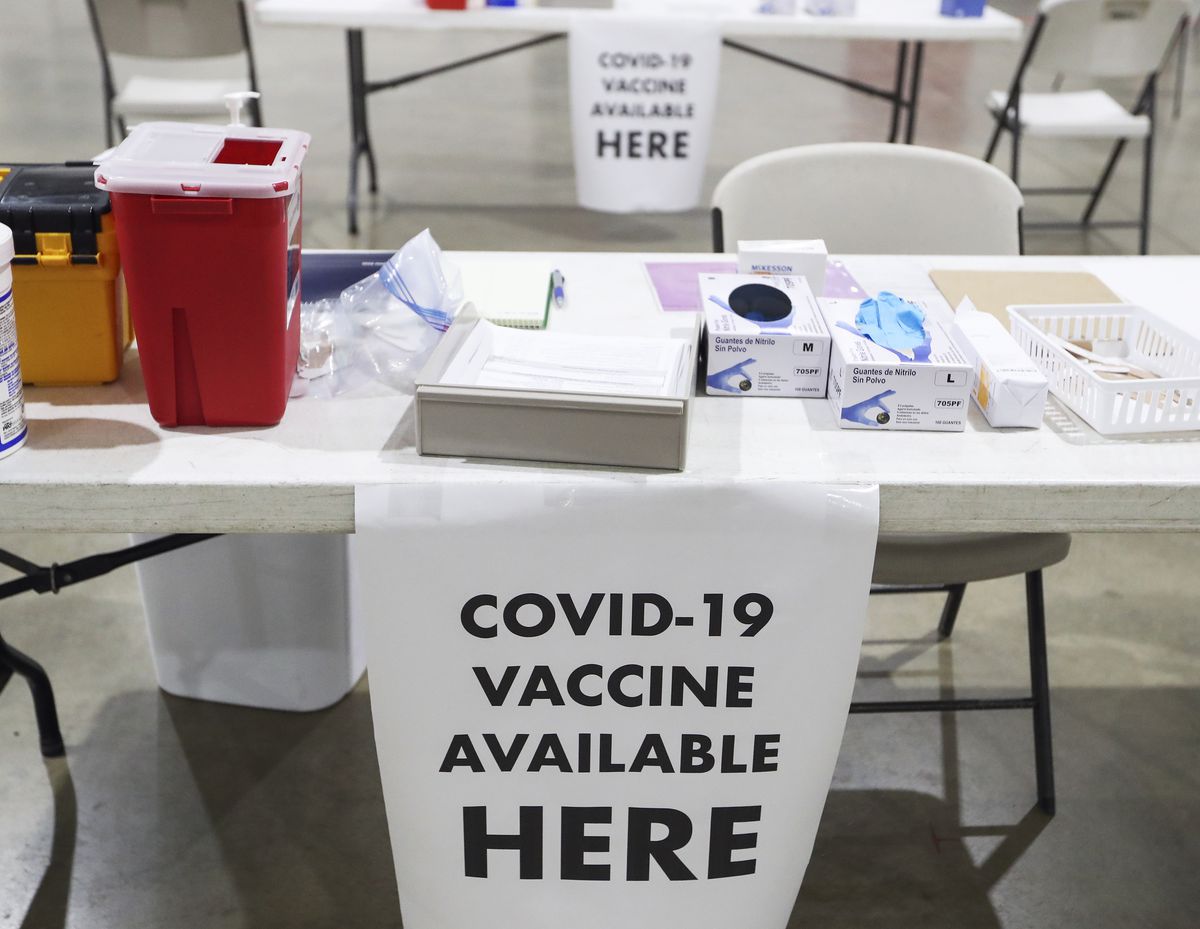 A COVID-19 vaccine clinic was set up in Raven Hall at the Alaska State Fairgrounds in Palmer, photographed on Tuesday, Jan. 12, 2021. (Emily Mesner / ADN)

A COVID-19 vaccine clinic was set up in Raven Hall at the Alaska State Fairgrounds in Palmer, photographed on Tuesday, Jan. 12, 2021. (Emily Mesner / ADN)

Thousands of new COVID-19 vaccine appointments are set to go live on the state’s vaccine website at noon on Thursday, state health officials said this week.

The open slots will be for appointments beginning Feb. 4 and will continue through the month. These appointments will only be for health care workers in Phase 1A and all adults 65 and older.

Seniors who want to sign up for an appointment should visit covidvax.alaska.gov beginning Thursday afternoon. That’s where there will be an option to type in a zip code to find a list of available, nearby vaccine providers with appointments, and then sign up.

Eligible Alaskans will also be able to call 907-646-3322 on Thursday to talk to someone who can help them make an appointment. That state-run phone line had previously only allowed voicemails, but there’s now a fully-staffed team answering calls, said Tessa Walker Linderman, who helps lead the state’s vaccine task force.

“You might be on hold for a little bit, but there will be somebody to answer your call,” she said.

Walker Linderman also clarified that while many of the new appointments will open up at noon on Thursday, additional appointments for February would be released earlier and later in the day, and in the coming weeks.

She encouraged seniors who are unable to make an appointment this week check back next Thursday. That’s because the vaccine task force has asked providers to time the release of new appointments for Thursdays, so that people don’t have to keep refreshing their web browsers constantly, she said.

“I can’t guarantee that no other appointments will pop up at other times, but we’re trying to make it more regular,” she said.

She also clarified that not every community is on the same timeline, and some will be releasing vaccine appointments at different times. In Homer, for example, appointments will open up on Tuesday, Feb. 2 for a clinic the following weekend.

Appointments for seniors first become available earlier this month, but available slots filled within hours of opening up due to heavy demand and not enough available vaccine for the approximately 95,000 seniors in the state.

Many eligible Alaskans have been unable to make appointments so far: by late last week, only about a third of all seniors had been able to get a shot.

Karin Woofter, a 66-year-old from Anchorage, said Tuesday that while she has been able to get her first shot, her husband, who is 70, has not.

Woofter was able to get a dose by showing up at a vaccine clinic being run by the Anchorage School District at 7:20 a.m., even though the clinic wasn’t set to open until 8. There were others already in line when she showed up.

Her husband had a work obligation that morning and couldn’t join her. The clinic closed Jan. 15 after using up all 6,000 doses it had received from the state, mostly to vaccinate seniors.

Woofter said she has checked back on the state’s website many times since to see if more appointments have opened up in Anchorage, but so far, none have. She has also left multiple messages on the state’s vaccine call-line.

“I really won’t rest easy until he gets the vaccine,” she said.

The number of available appointments is based on how much vaccine the state receives from the federal government in February.

Alaska will be receiving a total of 59,600 first doses of vaccine next month, plus an equally sized shipment to be used for those second doses later in the month, said Walker Linderman.

She said the state just learned that number on Tuesday. It’s close to what was expected, and slightly more than the 52,900 first doses the state received in January.

That number includes 18,500 doses allocated by the Indian Health Service for the state’s 229 sovereign tribes, and does not include additional shipments through Veterans Affairs and the federal department of defense for military members.

Based on the current numbers, it is possible that not every senior who wants to get vaccinated will be able to do so in February, Walker Linderman said.

“We know that not necessarily every senior will be receiving vaccine,” she said. “So I think as we progress through the month, we’ll definitely have a better sense of what the uptake is.”

By Tuesday, 82,468 people — just over 11% of Alaska’s population — had been vaccinated, according to the state’s vaccine monitoring dashboard.

At least 19,117 people had received both doses of the vaccine.