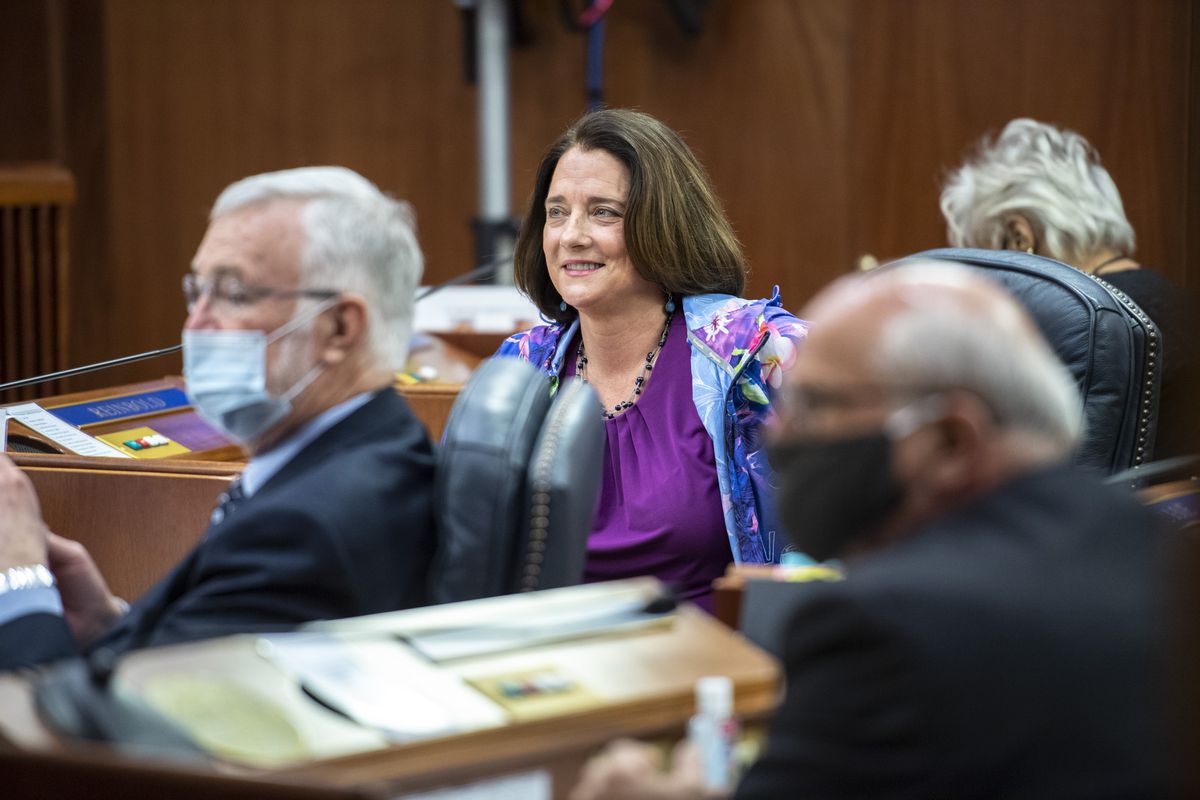 Sen. Lora Reinbold, R-Eagle River, center, goes maskless as senators take their seats at the Capitol under new health mandates on May 18, 2020, as they considered Gov. Mike Dunleavy's proposed use of federal COVID-19 money. (Photo by Michael Penn)

Sen. Lora Reinbold, R-Eagle River, center, goes maskless as senators take their seats at the Capitol under new health mandates on May 18, 2020, as they considered Gov. Mike Dunleavy's proposed use of federal COVID-19 money. (Photo by Michael Penn)

Republican state Sen. Lora Reinbold, in her first meeting as chair of the Senate Judiciary Committee, invited testimony from a Harvard professor who co-authored a disputed treatise by three infectious disease specialists who oppose broad lockdowns and school closures.

Reinbold made headlines in November when she wrote a social media post that referred to Alaska Airlines staff as “mask bullies” after flight attendants asked her to wear the required face covering. Reinbold later encouraged Alaskans to bypass mandatory COVID-19 tests at the airport. More recent posts question vaccine safety and express concern about “most valuable helpful covid treatment information getting labeled ‘missing info’ by false fact checkers” on Facebook.

Dunleavy, a Republican who came into office with a reputation as a small-government conservative, has been taking criticism from some in his own party for coronavirus-related restrictions even as others slam him for not going far enough to enact more restrictions such as a statewide mask mandate.

Along with Crum, the state’s chief medical officer Dr. Anne Zink was invited but was out of state. Reinbold said she also requested that Attorney General Ed Sniffen attend but the administration turned her down.

Reinbold — wearing a face shield rather than a mask Wednesday — selected the people testifying in her new capacity as Judiciary chair. The powerful committee oversees the activities of the Department of Law, which has authority over the state emergency declaration.

Dr. Martin Kulldorff, one of three authors of the Great Barrington Declaration, testified by video.

The declaration, released last fall, was almost immediately rejected by other researchers. Eighty signed a letter published in The Lancet in October that called the declaration’s herd immunity approach to managing COVID-19 -- allowing immunity to develop in low-risk populations while protecting the most vulnerable -- “a dangerous fallacy unsupported by the scientific evidence.”

Kulldorff in his testimony Wednesday called lockdowns “the biggest public health fiasco ever” and instead urged measures that specifically protect senior populations at the greatest risk of dying from the virus such as prioritizing vaccines and broad testing in nursing homes. Restricting the general public may reduce infection peaks that overwhelm hospitals but it simply extends the duration of a pandemic, he said.

Worse, Kulldorff said, is the “collateral damage” from lockdowns, including medical problems from missed screenings, learning and mental health problems from students not in school, elderly people unable to see family and additional deaths from overdose or suicide.

[Overdose deaths in Alaska have been on the rise since the pandemic began, report says]

In Alaska, the pandemic continues to hammer the economy but some Anchorage businesses say controlling the virus is a bigger concern than city regulations.

A state report found evidence that Anchorage’s summer “hunker down” order, combined with mask mandates, helped reduce the spread of COVID-19. Health officials say a December modified hunker down in Anchorage probably led to another, sharp reduction in cases recently.

Mat-Su Republican Sen. Mike Shower, referring to Kulldorff as “Doc,” noted that early models showed 20,000 Alaskans could die from COVID-19 by April 2020 — as of Wednesday, 259 Alaskans had died with the virus — and asked whether data shows the state should adjust policies to end lockdowns.

The answer was yes.

Armed with binders of health mandate information compiled over 10 months, Reinbold also said health orders authorized under the state’s COVID-19 emergency declaration appear to violate various constitutional rights including the right to privacy, due process and protection against unreasonable searches and seizures.

Reinbold listed every mandate approved by the state since March including a brief statewide shelter-in-place order and Dunleavy’s “Reopen Alaska Plan” that she said was of key interest.

She also said “there are some legal issues” with the governor’s three 30-day disaster declarations, including one currently in place. Dunleavy has introduced legislation to extend the declaration until the fall. State officials say the declarations are necessary to conduct crucial services like telehealth or expedited licensing.

Crum noted most mandates came in a “very tight” period in March when he, Dunleavy and Zink pulled all-nighters in the Atwood Building in Anchorage trying to respond to the potential for a hospital crisis predicted by ultimately inaccurate death models. Most mandates were repealed by summer.

Now, he said, just four remain generally with authority over travel and seafood industry protocols. There is no statewide restriction on businesses.

Generally, the state’s response tracks with the governor’s priority of protecting seniors and vulnerable rural communities, Crum said. Alaska has the lowest case-fatality rate in the country, and recently became the top state in the country for per capita vaccine distribution.

“Which is something we should all be tremendously proud of,” he said, adding the state is delivering 4,600 shots a day.

Reinbold, who said she likes to keep her meetings timely, ran just a few minutes over Wednesday as she and Crum sparred briefly. She accused him of not answering “a single one” of her pre-submitted questions while also taking up so much time that committee members didn’t have time for questions.

“You guys have had front and center for 10 months,” Reinbold told Crum before assuring committee members there will be plenty of time for questions at future meetings. “You’ve had the media. You’ve had everybody eating out of your hands.”

Crum corrected Reinbold after she accused him of “bragging about” having a thousand contact tracers, which raises privacy concerns for her.

Reinbold said she wants to get out the “other side” to the state’s restrictions, such as businesses going under and students and seniors suffering.

She asked Crum if “the people who create these vaccines, are they liable for all the adverse reactions?”

“Ma’am, that’s a question for the CDC and the congressional delegation,” he said.

The hearing was continued until Friday if Reinbold gets “the proper permissions” from the administration for participants. Otherwise, she said, she may have to cancel.