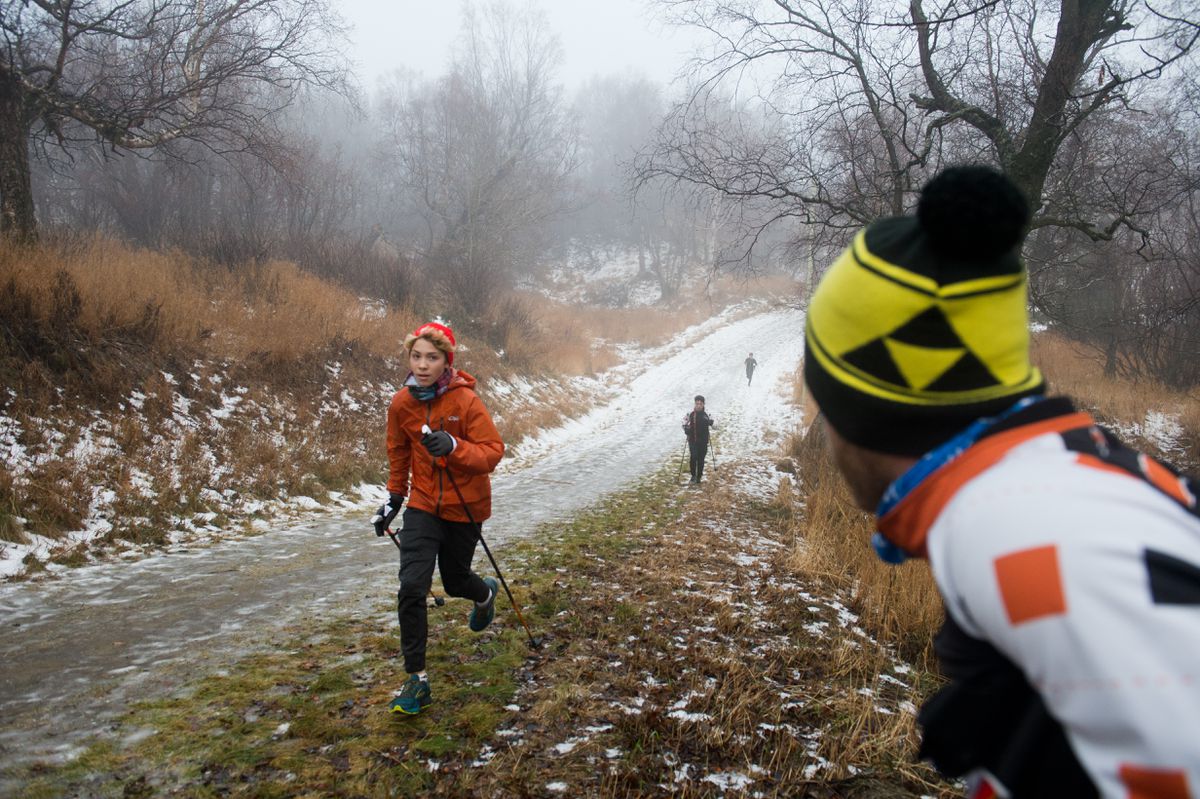 West High School cross country skiing coach Anson Moxness, right, instructs his athletes as they work out at Kincaid Park on Tuesday. Lacking much snow on the ground, the team ran with their ski poles. Head coach Anson Moxness said it's been one of the latest starts to the ski season in his seven years as coach. (Marc Lester / ADN)

West High School cross country skiing coach Anson Moxness, right, instructs his athletes as they work out at Kincaid Park on Tuesday. Lacking much snow on the ground, the team ran with their ski poles. Head coach Anson Moxness said it's been one of the latest starts to the ski season in his seven years as coach. (Marc Lester / ADN)

The bad news for sledders, skiers and snowmachiners: Alaska is suffering a sprawling shortage of snow, with every region below normal amid an unusually warm autumn.

“Anchorage is just a statistical oddity,” said Brian Brettschneider, a climate researcher with the University of Alaska Fairbanks. "In years with low snow through November, the city more times that not ended up having more snow than subsequent years.”

He cautioned: “This is not a forecast” that more snow is coming.

But it "offers a glimmer of hope for people in Anchorage hoping for more snow,” said Brettschneider, who highlighted the seasonal switches on his Twitter page, after crunching historical data.

The mountains surrounding Anchorage add uncertainty to weather patterns, helping create those changes, he said. In the rest of the state, early winter weather patterns are more likely to last through the season, his data shows.

Alaska snowfall is running way behind this season. Does that tell us anything about the reset of the season? Yes, it does. A modestly strong correlation exists between early season snowfall and the rest of the season's snowfall. #NotAForecast @AlaskaWx pic.twitter.com/Gkf7nzV2ml

Yes, there is hope for Anchorage, said Rick Thoman, a climate specialist with the Alaska Center for Climate Assessment and Policy at UAF.

But there are no guarantees when it comes to weather in Alaska.

“Anything can happen,” Thoman said.

So far, snowfall is low everywhere, including every major weather station in Alaska, Brettschneider said Saturday.

“We’re at 39 percent of normal snowfall around the state,” he said.

Cold Bay on the Alaska Peninsula hasn’t recorded a lick of snow, he said. It should have 9.7 inches.

Snowfall in Bethel hasn’t been this low since 1924, when a trace of snow had been recorded by Nov. 23, said Brettschneider.

One-tenth of an inch has fallen in Bethel this year, he said. They should have close to 15 inches by now.

Welcome to the new normal in the Southwest Alaska city, said Ron Kaiser. The big snow dumps of the past are increasingly rare.

His son, musher Pete Kaiser, no longer trains his teams with sled-pulling this time of year. It’s too dangerous without enough snow for braking, and no cushion if he’s tossed to the ground. The dogs are currently pulling four-wheelers instead.

Fairbanks is doing better than many other areas, recording 14 inches of snow, below the normal 22.9 inches by Nov. 23, Brettschneider said.

Brettschneider blames the limited statewide snow on two factors: a general lack of precipitation, and unusual warmth that often produces rain instead of snow.

Utqiagvik in the Arctic has had 14.9 inches as of Saturday, below the normal 19.2.

Anchorage had seen 2.3 inches of snow by Saturday, below the normal 17.7. (By Sunday afternoon, another half-inch of snow had fallen, according to the National Weather Service.)

Fire risk will jump sharply if the snow drought continues through spring, especially in wild areas across town where the spruce bark beetle has killed trees.

If things don’t turn, the department will step up the fire-prevention efforts it’s already planning, she said.

“We’ll be really concerned about wildland fire risk on places like the Hillside, Kincaid Park, Stuckagain Heights,” she said.

Two years ago, the city had less than 4 inches of snow though November, but higher-than-normal snowfall by season’s end pushed the total to almost 80 inches. A similar switch happened in other years, too, including in winter of 2012-13, he said.

Complicating this year’s picture for Anchorage is that an El Nino weather pattern appears to be in progress, where warm surface temperatures in the equatorial Pacific influence weather in Alaska, Thoman said.

“That puts thumbs on the scale,” Thoman said.