The Anchorage Assembly is set to vote on the city’s Climate Action Plan. Here’s what it would do. 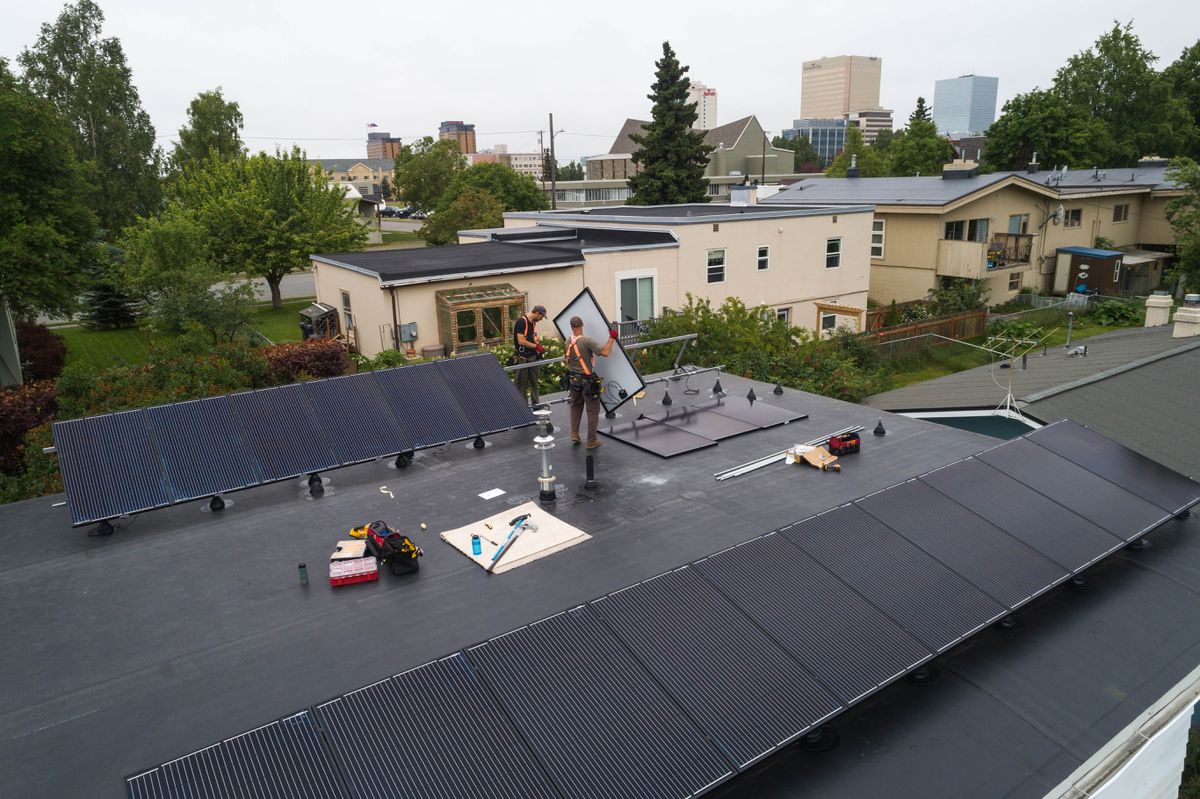 Jordan Buetow, left, and Ben May install a solar panel atop a home in Anchorage's south addition neighborhood Friday, July 20, 2018. May owns Anchorage Solar, and says the 20-panel array should offset 60-90% of the homeowner's electrical use. (Loren Holmes / ADN)

Jordan Buetow, left, and Ben May install a solar panel atop a home in Anchorage's south addition neighborhood Friday, July 20, 2018. May owns Anchorage Solar, and says the 20-panel array should offset 60-90% of the homeowner's electrical use. (Loren Holmes / ADN)

The Municipality of Anchorage has worked for months on developing a plan to prepare Alaska’s largest city to mitigate the effects of climate change, and the Anchorage Assembly is set to vote on whether to support that plan this week.

The Climate Action Plan calls for Anchorage to dramatically reduce greenhouse gas emissions in coming decades, and also develop a system to monitor local impacts of climate change. It calls for expanding local renewable energy generation, reducing waste and preparing for increased risk of wildfires, among many other goals.

“The plan itself does not change our policies or our codes. It just says, here’s the direction we’re working toward,” said Shaina Kilcoyne, energy and sustainability manager for the municipality.

In Alaska, the state that makes the U.S. an Arctic nation, the effects of climate change include erosion, thawing permafrost and diminishing sea ice. A federal report released last year outlined climate change-related challenges for, among other things, fishing and subsistence hunting.

Alaska is warming faster than any other state, according to that report. One estimate put maintenance and repair costs related to the effects of climate change at $110 to $270 million annually through 2060.

In Anchorage, scientists have observed a trend of increasing average seasonal and annual temperatures since 1949, when reliable data first became available, according to the municipality’s climate plan.

The plan is broad, laying out general goals for what it wants the city to look like in 2050 across various sectors including buildings and energy, land use and transportation, and consumption and solid waste. At the heart of the plan is the aim to reduce greenhouse gas emissions 80% from 2008 levels by 2050, with an interim goal of 40% by 2030.

Assemblyman Christopher Constant said he hopes that having a plan in place will ensure that the city takes actionable steps on it for years to come.

“Some people complain of (the) plastic bag ban, what good is it gonna do ... but we should be doing what we can, when we can, where we can, with what we have,” he said.

[Alaska experiencing some of the most extreme climate change in the U.S., says new report]

The resolution scheduled to go before the Assembly at its Tuesday meeting asks the body to adopt both the plan and also the municipality’s Climate Action Strategy. The plan is the document that would act as a foundation that the city would work from and update every five years, Kilcoyne said. The strategy pulls out actions that the municipality will focus on in the short-term, such as upgrading street and trail lights to high-efficiency LEDs and supporting infrastructure for electric vehicles.

Assemblyman John Weddleton thinks the plan sets some lofty goals but that some actions outlined in it are “fairly plain vanilla," he said.

“(The) cost-cutting steps, like switching to LEDs, are a no-brainer these days,” he said. “A lot of things like that, that are fairly simple and practical.” He said he thinks he will support the resolution.

Work started on the plan around August of last year, and was primarily funded by a grant from the University of Alaska Anchorage. It’s not clear yet how much the implementation of the vision laid out in the plan might cost.

“Many of the actions not only reduce greenhouse gas emissions but also create benefits which can be difficult to monetize," said Kilcoyne. Those include improved air quality and a wider range of transportation options in the city.

The municipality developing an action plan for climate change contrasts with some actions of Gov. Mike Dunleavy’s administration. In February, Dunleavy abolished the Climate Action for Alaska Leadership Team, which was established by former Gov. Bill Walker. During the campaign last year, Dunleavy said he would consider cutting climatologists from the state budget.

“I think it’s a huge shame that the governor is choosing to basically do nothing when clearly there’s evidence of climate change here in Alaska,” said Kilcoyne. “I think ignoring the problem is not very helpful.”

A spokesman for Dunleavy did not respond to an emailed request for comment for this story.

If the resolution passes, the municipality will start to implement the plan. The city would also create a sub-cabinet that meets regularly to coordinate action under the climate strategy.

Seven of the Assembly’s 11 members were in support of the resolution when it was prepared earlier this month.

“I don’t see any situation in which it doesn’t pass,” said Constant. “If it doesn’t happen, we will just continue working on what we do. This just brings together a more coordinated approach.”

Assemblyman Fred Dyson of Eagle River said he is “always wary that plans like this will unduly restrict development and individual liberties," but that he doesn’t have any of those concerns about the this effort. He said he will support it.

“Even though we have an abundance of carbon-based fuels, that’s no reason for us not to be wise about the using of it,” he said.