How a decision by China reverberates in your recycling bin 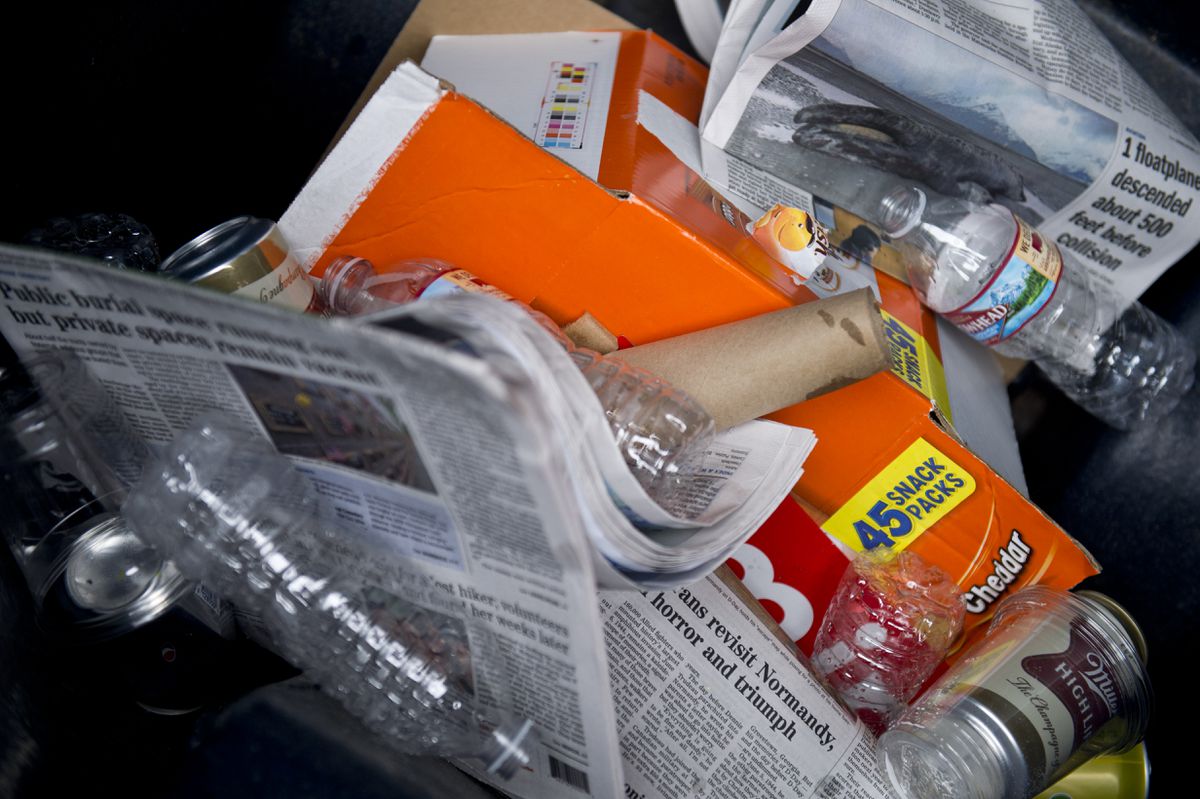 Anchorage officials announced the ban Thursday, two years after the city’s trash haulers began accepting clamshell plastic containers at the curb. Similar decisions have unfolded in cities and communities across the United States since the start of 2018, when the Chinese government mostly shut down the country’s market for American recyclables.

China said its decision was based on environmental concerns and high rates of trash and unclean materials mixed with American recyclables. The change has had global implications: Western U.S. states, which relied heavily on China to recycle low-grade plastics and mixed paper, were among the hardest-hit.

Alaska ships most of its recycling to the Port of Tacoma in Washington. Most of the state’s recycling ends up being made into other products, officials say, though the exact amount is impossible to track.

For some time, the plastic clamshell containers have been collected but not recycled, stalling in Tacoma. A spokesperson for Waste Management, a company that runs one of the major recycling sorting facilities there, said in a May interview there’s simply no market for them.

“Right now, clamshells are not being made into end products,” said Jackie Lang, senior area public affairs and communications manager for Waste Management. “So they don’t belong in that recycling part.”

Lang couldn’t say if the material was being simply stockpiled or sent to the landfill. Clamshells are a No. 1 plastic, a category that also includes soda bottles. But soda bottles are made of different plastic resins and are more valuable than clamshells and also plastic cups, officials say.

Clamshells make up less than 1% of Anchorage’s overall curbside recycling, according to Suzanna Caldwell, a spokeswoman for Solid Waste Services, the city-owned trash utility.

Other communities have adopted even more extensive stoppages on recycling materials for plastics marked No. 3 through No. 7, which include yogurt containers, syrup bottles, medicine bottles with pop-off tops and plastic buckets. Alaska never accepted those types of plastics to begin with, said Mary Fisher, the longtime leader of a nonprofit organization called Alaskans for Litter Prevention and Recycling.

“If we can’t sell something in the marketplace, and it’s very likely to have to be landfilled, we stop taking it,” Fisher said.

Plastic bottles with screw tops and milk and household detergent jugs, which are made of a sturdy plastic with a higher melt point, remain valuable. Yet the prices have dropped substantially in the wake of the China ban. These plastics were once worth $400 a ton, Fisher said.

Today they’re worth about $30 a ton, which barely covers processing, Fisher said.

Cardboard, a stalwart of the recycling business, has also plummeted in price. Mixed paper, a category that includes junk mail, newspaper, cereal boxes and egg cartons, is at the lowest it’s been in history, Fisher said.

Fluctuations in the market are nothing new. Glass recycling, for example, has been on and off in Anchorage over the decades.

But Fisher and other experts say they've never seen anything quite like this.

“This downturn in these recycling markets is pretty unprecedented for the past 30 years,” Fisher said.

Plastic bottles and jugs have the greatest opportunity to bounce back, Fisher said. Plastic cups and clamshell containers for salads and berries, however, have never been worth more than about $50 per ton, Fisher said. Now, at about $2 per ton, those containers are virtually trash.

Anchorage’s largest trash haulers have seen huge price increases in a short span of time when it comes to bringing recycling from the curb to a processor.

In 2017, mixed curbside recycling cost about $40 per ton to process, said Caldwell, the spokeswoman for Solid Waste Services. Now the price runs around $73, Caldwell said. A private company, Westrock, takes the material, bales it and then brings it to the Port of Alaska, where it’s shipped to Seattle for sorting.

By comparison, taking the same volume of material to the landfill would cost $71.50.

“We’re at a tipping point where it’s no longer cheaper to process (recycling) than it is to dispose of it,” Caldwell said.

The utility is now spending $40,000 more this year than last year to run the recycling program, Caldwell said. She said that means less money for other programs.

Solid Waste Services has about 12,000 residential trash customers. About 10,000 use curbside recycling services. The cost is the same regardless of whether you opt in to recycling, Caldwell said.

Meanwhile, Alaska Waste, the city’s largest private trash hauler, raised its curbside recycling prices in April to deal with the rising cost. Curbside services now cost between $15.50 and $16 a month, up from about $14, according to spokeswoman Laurel Andrews. The company picks up curbside recycling from roughly 15,000 households, about a quarter of Alaska Waste’s residential customer base in Anchorage.

Officials insist recycling isn’t going anywhere. It has the potential to grow, they say.

“We are committed to recycling, and we do hope that eventually the markets level out a little more,” Caldwell said.

Much depends, however, on what will rise up to fill the gap left by the China ban. New mills are being built in the United States and Mexico, but that all takes time, Fisher said.

There’s also rising pressure on manufacturers to find substitutes for thin plastic and other difficult-to-recycle materials. At the end of the day, salad and fruit won’t start coming in glass containers, Fisher said. But she said large companies like Pepsi and Coke are now focused on creating products with a higher percentage of recyclable materials.

Lang, spokeswoman for Waste Management, said her company has found new markets for recycled materials since the China ban took effect. The company has also invested tens of millions of dollars in 2018 into recycling infrastructure, she said, slowed processing lines, and added people to sort lines to remove contamination.

She said she doesn’t see a market for clamshells re-emerging anytime soon, though.