How recycling works in Anchorage: Most of it goes to the Lower 48 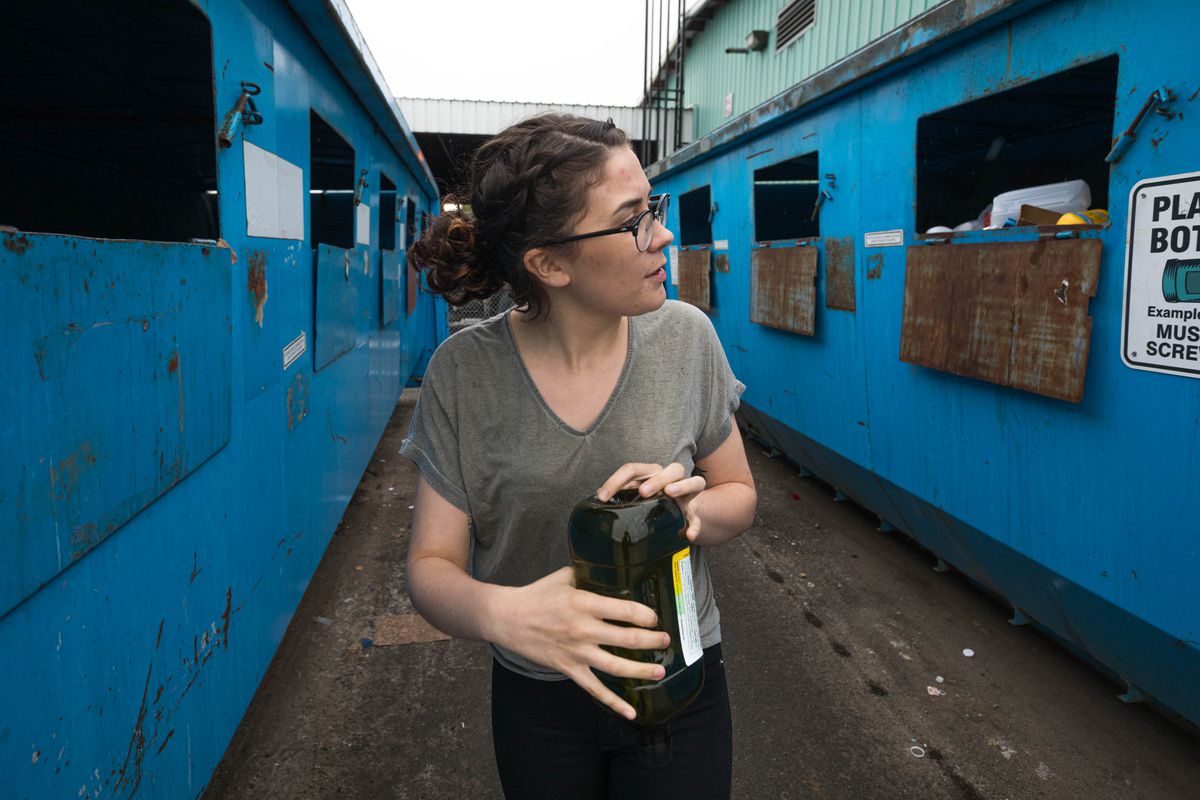 Alexa Daniels looks for the correct bin to deposit her plastic bottle Thursday, May 30, 2019 at the Anchorage Recycling Center. (Loren Holmes / ADN)

Alexa Daniels looks for the correct bin to deposit her plastic bottle Thursday, May 30, 2019 at the Anchorage Recycling Center. (Loren Holmes / ADN)

Jeanine Firmin doesn’t have curbside recycling at her home in Eagle River, so she bought bins from Fred Meyer and labeled each for different categories of recycling, from plastic to cans.

She fills the bins and also picks up recycling for her friends and neighbors. Then she drives all of it to the recycling drop-off center at the city-owned landfill.

Firmin is among an impassioned corps of Anchorage recyclers. She wonders if all the hard work pays off.

“You hope you’re not doing all this just to have it thrown away,” Firmin said.

No one can say for sure how much of Anchorage’s overall recycling actually ends up getting recycled into new products. A lot depends on whether there’s a market for the products at that time, officials say. There’s also the issue of whether the material is clean and free from trash and food residue, which is a bigger problem for curbside recycling, officials say.

The most valuable material, like cardboard, newspaper and aluminum and steel cans, do consistently get sold to manufacturers and used for new products, officials say. Most of those buyers are in the Lower 48, though glass and newspaper can be recycled locally in Alaska.

Lower-value materials, like low-grade plastics, have more trouble finding buyers, especially in the wake of a 2018 ban by the Chinese government on most American recyclables, officials say.

There’s bad recycling behavior that can cause an entire load of otherwise good material to go to the landfill. That includes tossing a dead moose’s head in recycling, as someone once did at the mixed paper bin at the Anchorage Recycling Center, said Mary Fisher, the executive director of Alaskans for Litter Prevention and Recycling, a statewide organization that runs recycling programs.

People also occasionally toss in cans of paint, or dishwashing or laundry soap bottles that aren’t fully empty and clean, Fisher said. Those items can contaminate everything around them.

But the landfill is generally a last resort, Fisher said.

“The cost of collecting it, baling it and handling it is significant,” Fisher said. “To have to pay a landfill to take it -- that’s the worst thing that can happen."

To many who dutifully fill their bins, there’s a lot of mystery surrounding what happens to a household’s recycling once the it leaves the curb. It’s difficult for the average person to track.

Here’s a general roadmap to how Alaska’s recycling system works.

The carts go out

Tens of thousands of recycling roll carts go out on the curb every other week.

That’s where someone like Rafael Contreras picks it up. Contreras picks up recycling for Solid Waste Services, Anchorage’s city-owned trash utility. He spent 14 years driving garbage trucks before switching entirely to recycling.

On a May workday, Contreras drove around North Mountain View and picked up several hundred bins. He pressed a button in his cab to dump it all into the back of the city truck.

The most common contamination he sees in the bins, Contreras said, are construction materials. A month earlier, Contreras had to dump an entire load of recycling into the landfill because someone put paint and drywall material into their bin.

It isn’t often the entire load has to go, Contreras said.

Once he’s filled up the truck, Contreras takes the load to the Anchorage Recycling Center, a facility on Rosewood Street off Dowling Road, which is run by a for-profit company called WestRock.

On his drive in to the Anchorage Recycling Center, Contreras passed large bins that line the lot outside. Anchorage residents can take recycling here and sort it into the bins themselves.

That includes people who either don’t have curbside recycling, roughly 70% of all households in the Anchorage Bowl. Or people who want to recycle glass, aluminum foil and plastic bags and film, which are not allowed in curbside bins. Broken glass and thin plastic bags can wreak havoc on sorting equipment, while aluminum foil is very difficult to sort out, Fisher said.

Since it’s already being sorted on-site, the recyclables in the bins never go to an automated sorting facility. The material gets compacted into tight bundles by type and sold directly to processors, including mills.

Some materials stay in Alaska. Glass, for example, is sold to a Ship Creek-based company called Central Recycling Services, where it’s ground up into material for construction projects. Anchorage Water and Wastewater Utility buys crushed glass to use for pipe bedding and other projects.

In Wasilla, a company called Therma-Kool turns newspaper and cardboard into insulation.

But plastics and aluminum generally have to go by sea to the Lower 48, along with the mixed recycling from curbside bins.

WestRock, which is based in Atlanta, is one of the largest paper and packaging companies in the world. The company also owns cardboard mills in the Lower 48. With its giant market presence, WestRock has little trouble selling the materials it collects to manufacturers, Fisher said.

The company charges waste haulers like Solid Waste Services and Alaska Waste for each ton of recycling. The amount changes based on commodities prices.

When cardboard and paper are valued high, WestRock can charge the haulers less. When prices are rock-bottom, the haulers end up paying more.

Historically, those rates have been less than $71 per ton, which is what it costs to dump the material off at the landfill. But in recent months, with the reverberations of China’s sweeping 2018 ban on recyclables hitting Alaska, the cost has been roughly the same, said Suzanna Caldwell, a spokeswoman for Solid Waste Services.

In WestRock’s yard, no sorting happens. Anchorage produces between 5,000 and 6,000 tons of curbside recycling material each year, which is not enough to justify the construction of a multimillion-dollar sorting facility, Fisher said.

So instead, behind the fence, the company takes big piles of recycling and uses heavy equipment to pack them into bales. Each bale weighs between 1,300 and 1,500 pounds.

Those bales get put into containers, where are then loaded onto trailers and driven to the Port of Alaska.

WestRock company officials declined a request for a tour or an interview.

On a boat to Tacoma

At the port, crews place recyclable-filled containers on ships and barges that have made delivers and are returning to the Lower 48. The shipping and transportation companies Matson, Tote Maritime and Lynden each donate shipment space and crew time.

The value of the shipping space and manpower is roughly $4 million each year, Fisher said. Recycling comes to the port from across the state, in addition to Anchorage.

Then the ships head to the Port of Tacoma, outside of Seattle.

From port to sorting line

At the Port of Tacoma, trucks pick up the containers and drive them to sorting facilities, mills or other buyers.

The official name of a sorting facility is a materials recovery facility, which industry people refer to as a MRF (pronounced “murf”). One example: Waste Management JMK Fibers, a 90,000-square-foot building located on a 10-acre property at the Port of Tacoma. The facility takes recycling from the Tacoma area and other parts of Washington, Oregon, Idaho, Montana, Canada and Alaska.

The destination of the recyclables depends on where each material is likely to be sold, officials say.

At the MRF, sorting equipment breaks up the bales of recyclables. Most of the sorting is automated, but there’s a physical conveyor belt staffed with employees who pick out trash, said Jackie Lang, senior area public affairs and communications manager for Waste Management.

The facilities have also increasingly installed optical scanners, computers that can quickly scan and identify different grades of plastic and send them to the right bin.

At the end of sorting, the facility has big piles of cardboard, mixed paper, tin cans and thicker plastic bottles.

Those piles of valuable recyclables get put in containers and shipped to a mill, which is where the items are turned into new materials that are then sold to manufacturers.

The sorting line also leads to a trash pile for items that don’t fit into any of the categories or don’t have a place to go. That pile might include garden hoes, shoes, bowling balls and pieces of plywood, based on other news reports.

Lately, those piles have also likely included low-value plastics that can’t be sold on secondary markets, like clamshell containers or plastics marked No. 3 through No. 7, which includes yogurt containers and buckets. Lang, the Waste Management spokeswoman, said she couldn’t confirm exactly what’s in the trash pile at the Port of Tacoma facility. But she said the clamshells are not being made into new products at this time.

Where it goes from there

In general, Alaska’s cardboard ends up at mills in the Pacific Northwest, Fisher said. WestRock, the company that owns the Anchorage Recycling Center, owns a cardboard mill in Tacoma.

The cardboard mill takes recycled cardboard and turns it into pulp. The huge facilities take in thousands of tons of new material on a monthly or even weekly basis.

The California-based brewing company Anheuser-Busch is one of the buyers of Alaska’s aluminum cans, according to Fisher. Mills in Kentucky also likely buy the aluminum.

Plastic is more complicated. Each grade has its own market. Giant, expensive machines turn the plastic into tiny pieces, which are then cleaned and sold to manufacturers all over the country and the world.

Mills generally buy plastic bottles with the No. 1 mark, and plastic jugs with the No. 2 mark, which includes soda bottles and milk and laundry detergent jugs.

Other types of plastic, such as clamshells and plastic bags, and plastics Nos. 3 through 7 have had a far more limited market recently, with prices plummeting in the wake of the China ban. There’s a high risk of those materials being landfilled, which is why Alaska won’t accept them in recycling, Fisher said.

That’s why it’s more important than ever to put clean materials in recycling, she said.