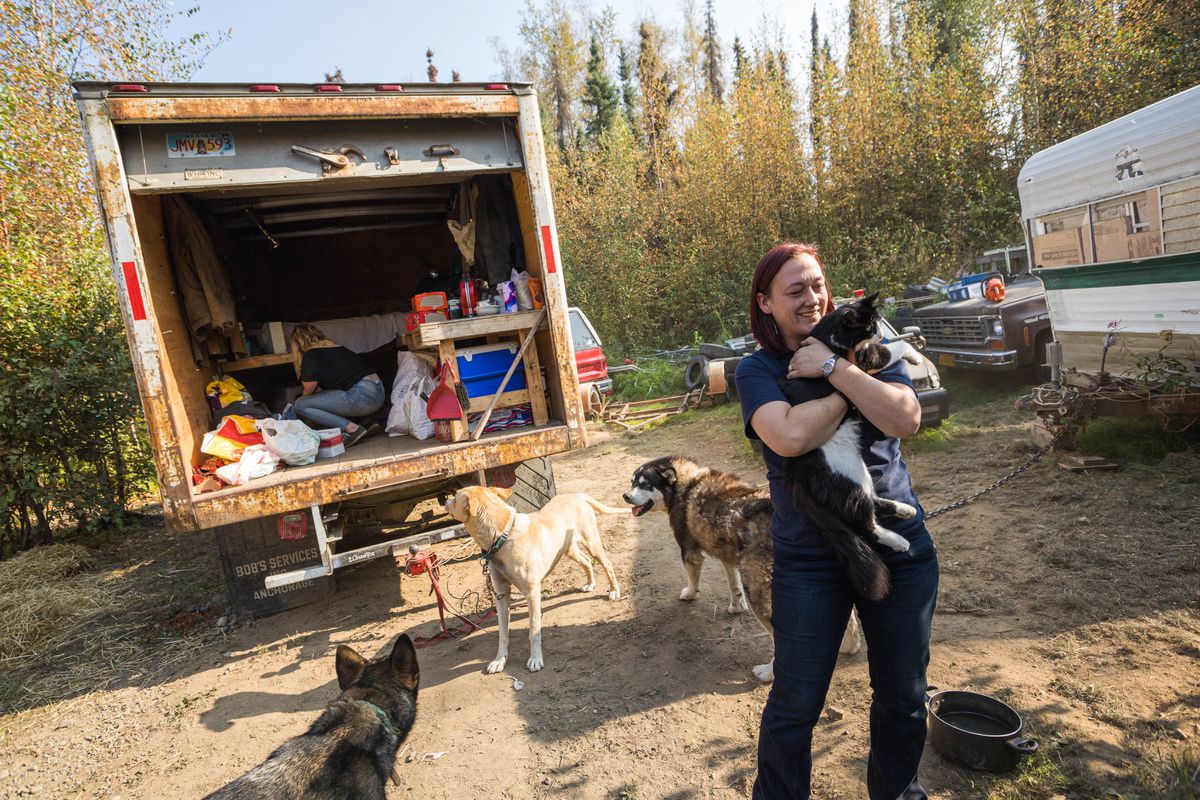 Ashley Johnson holds one of her cats outside her temporary home, a box truck parked in a friend's yard, on Wednesday, Aug. 21, 2019 in Meadow Lakes. Johnson and her family lost their home in the McKinley Fire. (Loren Holmes / ADN)

Ashley Johnson holds one of her cats outside her temporary home, a box truck parked in a friend's yard, on Wednesday, Aug. 21, 2019 in Meadow Lakes. Johnson and her family lost their home in the McKinley Fire. (Loren Holmes / ADN)

WASILLA — When Buck Roberts and Ashley Johnson were warned back in July that the Montana Creek wildfire might force them to evacuate their Susitna Valley homestead, the family was ready.

Record heat and an unusually dry summer left the region parched and dangerously primed to burn. Smoke from that fire loomed over the northern horizon as the couple prepared to leave with their two kids and yard of pets.

“We were all packed and ready to go,” Johnson said, “and then nothing.” The fire never made it south to their 5-acre plot near Mile 88, between Willow and the Talkeetna cutoff.

Last weekend, it happened again — and it happened fast. With winds gusting out of the north, a new wildfire started Saturday afternoon and quickly spread down the Parks Highway.

"It looked like a truck on fire coming down the highway,” Roberts said.

“With torches out the sides,” Johnson added.

Fire officials, on their way to battle the growing McKinley fire, stopped at the homestead and told the family to prepare to evacuate.

While Roberts used a bulldozer to cut a firebreak around the house, Johnson ran around the yard catching their three geese and 24 free-range chickens, packing them all in a big, wire dog kennel.

“The smoke got so bad I had to leave,” Roberts said.

Roberts watched burning pine needles and ash drift onto their property. When it came time to flee, five dogs, two cats and the couple’s children, ages 11 and 13, crammed into the family’s Chevrolet Blazer with Roberts and Johnson, and they all sped south down the highway — smoke and flames in the SUV’s rear-view mirror, chickens and geese in a kennel strapped to the roof.

It would be the last time they’d see their home, as they joined an estimated 350 to 400 people who have evacuated because of the McKinley fire. As of Thursday, fire officials estimated 80 structures had been lost. The Roberts and Johnson home was one of them.

Now the family is sleeping in a borrowed box truck parked on a friend’s homestead outside Wasilla. The box has been outfitted with a plywood platform bed for the family of four to sleep on. A donated space heater keeps it warm at night.

On Wednesday afternoon, Roberts said he probably would have kept working if it weren’t for his family. For the last three years, they had been building “one step at a time” while saving and “paying out of pocket,” he said. This summer, a well and septic system had been installed.

“The chickens have settled down enough to lay eight eggs,” Johnson said.

Her husband, worried about the family and still in shock, has also managed to stay calm throughout their ordeal.

It happened “too fast to be scared,” he said.

He was happy to have his family and the five big dogs he’d rescued from a life at the pound. “No one could handle me either when I was young, so I wanted to give them a chance,” Roberts said of his pets.

The family has been spending its days with a couple dozen other evacuees at an American Red Cross-hosted shelter at the Menard Memorial Sports Center in Wasilla. The shelter provides meals and a place to shower, but people are also finding a sense of community there.

Miranda Bennett, a lifelong friend of Johnson’s, has been coming to the shelter just to visit with her friend. “You don’t have to be blood to be family,” she said Wednesday.

A friend who traveled through the fire’s scar took a few photos to confirm the home was lost, but the extent of the damage to plot was still undetermined. Fire officials estimated it may be several days before people can begin traveling back to their property.

“I do love that area,” Johnson said.