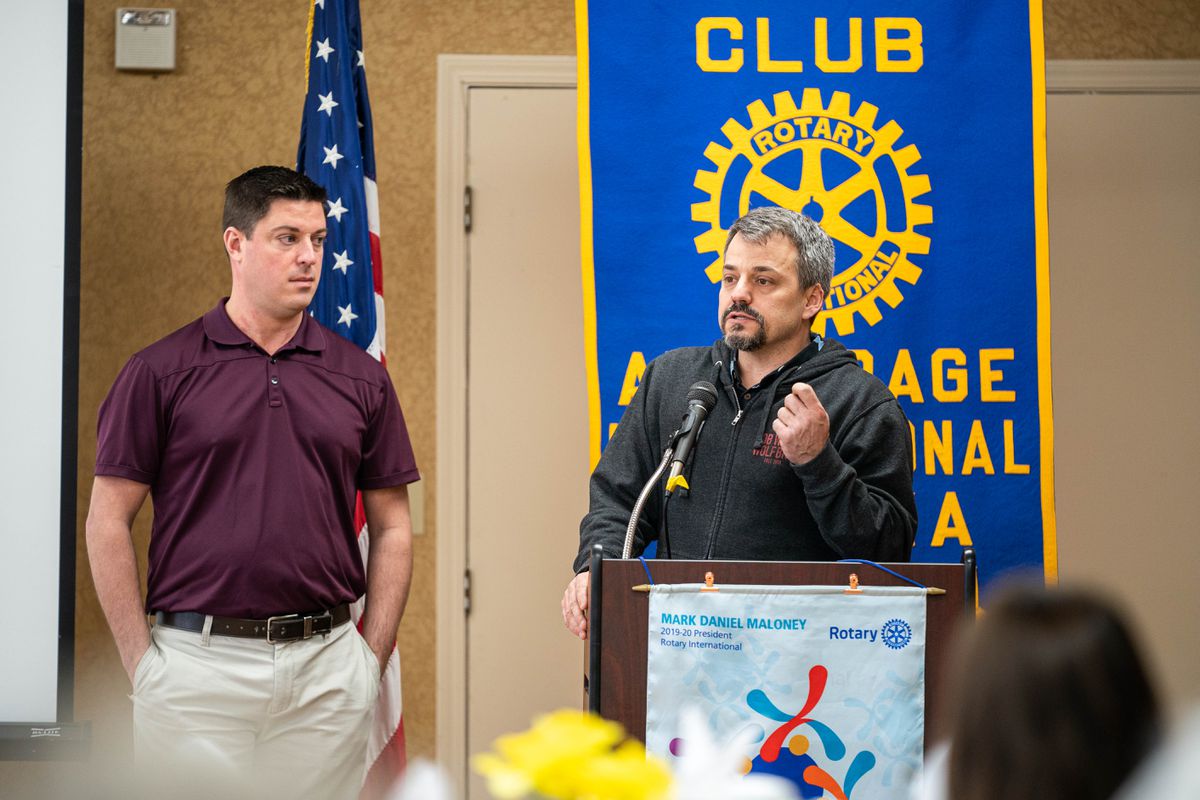 Anchorage Assemblyman Chris Constant, who represents downtown, speaks to the Anchorage International Rotary Club about an upcoming ballot proposition that would add a 12th Assembly member on Friday at the Coast International Inn in Spenard. Currently the Anchorage Assembly includes two members from all but one district, downtown, which represents a smaller number of people and has only one representative. With Constant is Rob Cupples, who also supports the proposition. (Loren Holmes / ADN)

Anchorage Assemblyman Chris Constant, who represents downtown, speaks to the Anchorage International Rotary Club about an upcoming ballot proposition that would add a 12th Assembly member on Friday at the Coast International Inn in Spenard. Currently the Anchorage Assembly includes two members from all but one district, downtown, which represents a smaller number of people and has only one representative. With Constant is Rob Cupples, who also supports the proposition. (Loren Holmes / ADN)

A group of downtown Anchorage residents and their Assembly member are asking voters to add a 12th seat to the city’s legislative body.

The Assembly is made up of 11 members, making a tie impossible with all members present. But that gives downtown — the lone single-member district — short shrift, Assemblyman Chris Constant said.

“Each district ought to have fair and equal representation,” Constant said.

Constant and the “Two for All” campaign support passage of Proposition 12 on the spring ballot, which would add a second member to the downtown district, giving the body 12 total members.

If passed, Proposition 12 would likely not add a seat until 2022, Constant said. After the 2020 census data is compiled, the Assembly will proportionally redraw the city’s districts. If voters approve Proposition 12, a candidate could run for the new seat in the following election.

Adding a member would change several dynamics on the Anchorage Assembly — the biggest being it would take seven votes for something to pass, rather than six. With even numbers, tie votes would become more likely. A majority is needed to pass policy.

Opposition to the idea is limited. The Assembly approved sending it to the ballot with a 9-2 vote. Some argue 12 members isn’t the ideal approach, but understand why there’s a movement to add a seat.

“It’s not a terrible idea, adding the other one, it’s just not the solution I think,” said former assemblyman and 2021 mayoral candidate Bill Evans. Evans would rather go to fewer, single-member districts.

Evans’ concern is that there would be more tie votes, which are failing votes.

Constant argues that both the state House and Senate have even numbers, and it’s not uncommon for an Assembly member to be absent from a meeting, leaving an even number on the body.

Constant said raising the bar to pass ordinances would benefit residents. Assembly members will have to do more research and come up with better arguments to get six other members to support their proposals, he said.

District One encompasses downtown, South Addition, Bootlegger Cove, Government Hill, Airport Heights, Fairview and parts of Mountain View and Northway. Constant said those residents are disenfranchised by having one representative.

Without a district partner, Constant said he needs to ask members outside his district to second a motion for him to introduce legislation. And if he’s traveling or out sick, the downtown district doesn’t have anyone representing it at Assembly meetings.

While the downtown area has limited housing, it’s an economic hub for the city. Constant said representing the business community isn’t properly taken into account in determining district size.

A city estimate found an additional seat would cost $61,900 per year, though Constant thinks it would be closer to $80,000.

The “Two for All” campaign is chaired by Rob Cupples, a Sand Lake resident who owns Cupples Cottages, vacation rentals on Third Avenue and Hyder Street.

For Cupples, the cause is personal. His property was originally purchased by his grandparents when it was surrounded by farmland. He said that over the years, he’s seen crime and homelessness grow to become a constant presence.

“For it to deteriorate like it has is kind of heartbreaking,” he said. “But I aim to do something about that.”

For the past few weeks, Cupples and other campaign leaders like Constant and “Two for All” Deputy Treasurer Moira Gallagher have presented their argument to community councils and rotary clubs. Cupples said he hasn’t received much pushback from the community.

“I haven’t felt that I’ve needed to sell this to anyone,” Cupples said. “This is nothing more than an educational campaign to inform the voters of the composition of the Anchorage Assembly.”

Constant, along with Assembly members John Weddleton and Forrest Dunbar, sponsored a proposal to put Proposition 12 on the ballot, and it passed the Assembly 9-2.

Eagle River-Chugiak members Crystal Kennedy and Fred Dyson opposed it, with the concern that it would water down their representation. Their community has different concerns from those in the Anchorage Bowl, Kennedy said, and having to get seven votes rather than six will hurt them.

“He’s correct in that he stands alone," she said of Constant. "But I don’t believe this is necessarily the mechanism to fix that.”

Evans, the former Assembly member, also pointed to politics. Downtown tends to be one of the most liberal pockets of the city, he said.

“You’re basically adding what should be a fairly dependable liberal seat to the district," he said.

Cupples, a lifelong conservative, said it has nothing to do with that.

“It’s an inequality in representation,” he said. “It’s a flawed system that needs to be fixed.”