A majority of Anchorage Assembly seats are up for election. Here’s who’s running. 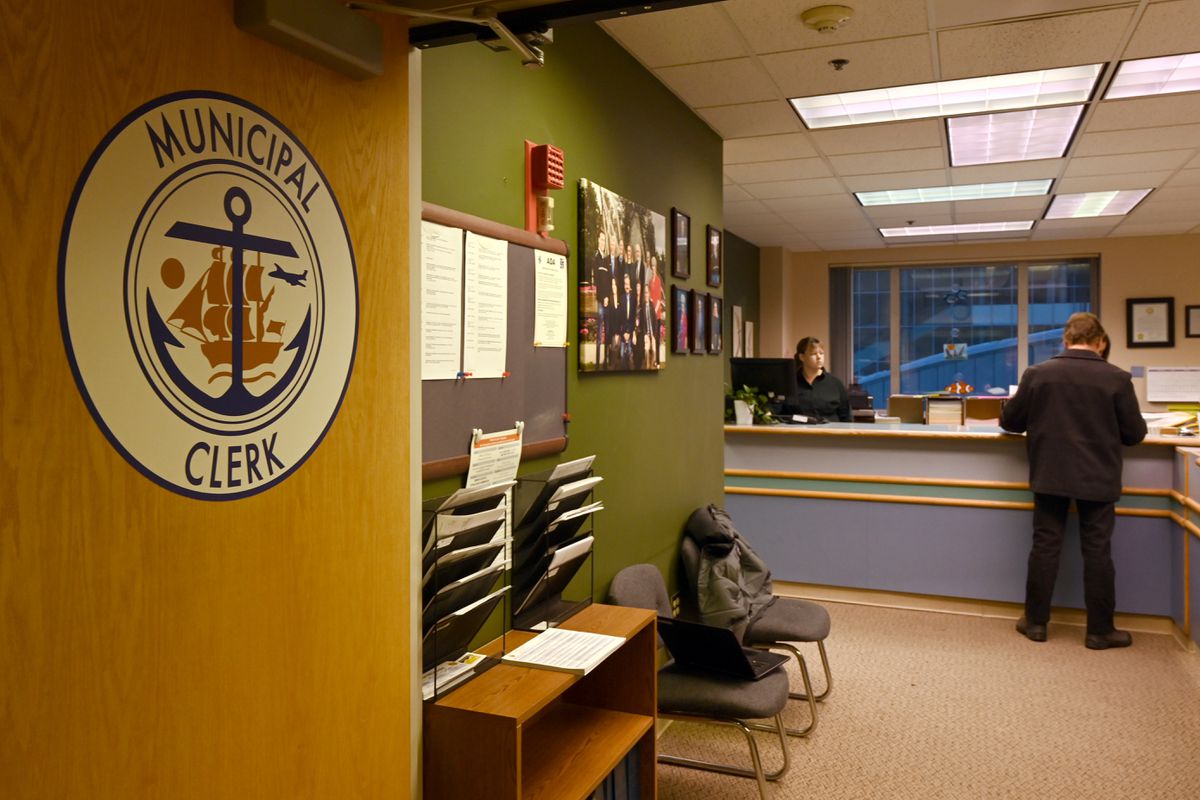 The Municipal Clerk's Office was mostly quiet at the last moment of the candidate filing period, Jan. 31, 2020. (Anne Raup / ADN)

The Municipal Clerk's Office was mostly quiet at the last moment of the candidate filing period, Jan. 31, 2020. (Anne Raup / ADN)

Six of the 11 Anchorage Assembly seats are up for election in April, as are two seats on the Anchorage School Board.

The Assembly has had a liberal-leaning supermajority since it flipped two conservative-leaning seats in 2016. While the positions are technically nonpartisan, the election could disrupt the body’s current nine-member voting bloc.

Election Day is April 7, but ballots will be mailed out to voters March 17.

In 2018, the Assembly voted 9-2 to approve a plastic bag ban. On Jan. 28, the body voted 9-2 to put an alcohol tax on the ballot, with conservative Assemblyman Fred Dyson voting for it, and left-leaning moderate John Weddleton, who sponsored a different version of the tax, voting against it.

A high priority for several members over the next year will be finding new revenue sources to better fund things like public safety, homeless shelter beds and infrastructure throughout the city. April’s Assembly election results would play a role in the course they take, and how much of a potential tax would be used for new initiatives or used to offset property taxes.

Chris Constant: Constant was first elected in 2017. He is not being challenged.

Assemblyman Fred Dyson is not seeking reelection. The municipality’s northernmost district consistently elects more conservative members, who tend to oppose new taxes and talk about reducing the size of government.

Jamie Allard: Allard is running after an unsuccessful campaign for the Alaska House in 2018, where she lost to Rep. Kelly Merrick in the Republican primary by a couple hundred votes. Allard brands herself as a conservative who will fight against new taxes and crime, and for business.

Roger Branson: Branson is seeking office for the first time. Branson is a roofing contractor, although he said in an email to the Anchorage Daily News he has not been active in that job for several years. On his website, Branson talks openly about having a mental illness. Branson has a criminal history and has had several protective orders imposed against him.

Stephany Jeffers: Jeffers is seeking an Assembly seat after her unsuccessful 2018 run for the Alaska House of Representatives. Jeffers was the Democratic nominee, but did not declare an affiliation with any party. She works as a circus acrobatics instructor and is a former Miss Alaska.

Nick Danger: Danger has served on the Public Safety Advisory Committee for seven years, chairing it the past five years. The committee gives input to the mayor and Assembly. Danger said public safety is his primary focus. He said he’s a Republican and likened his politics to that of former Assemblywoman Amy Demboski of Eagle River.

Danger ran against Quinn-Davidson in the 2018 special election. He came in sixth with 142 votes.

Felix Rivera: Rivera won his seat in 2017 after it was vacated by now-Sen. Elvi Gray-Jackson, D-Anchorage. He served as chair for the past year, but stepped down from that position this week to focus on his campaign.

Christine Hill: Hill is challenging Rivera after losing to Assemblywoman Meg Zaletel for Midtown’s other Assembly seat in 2019. Hill has been a vocal critic of the alcohol tax Rivera sponsored, as well as any other taxes.

[How much voter approval is required to pass an Anchorage sales tax? It depends]

Enrico Tutaan: Tutaan is seeking office for the first time. He works for the Anchorage School District as a high school success coach. Tutaan said he’s “neutral” on the political spectrum, and said the chance to improve his community motivated him to run.

Pete Petersen: Petersen is a veteran politician, serving two terms as a Democrat in the Alaska House before losing to Rep. Lance Pruitt, R-Anchorage. He won his Assembly seat in 2014 and defended it in 2017. Petersen is one of the least-vocal members of the Assembly, but is generally in step with the current majority.

Monty Dyson: Dyson is an assistant pastor at the Anchorage Baptist Temple. He is a conservative running on a fiscal platform. Dyson has been campaigning on social media, where he said he will look for ways to curtail spending and avoid tax increases.

David Walker: Walker filed for office Friday. Walker ran for Assembly about 30 years ago but dropped out before the election. He said he’s conservative, but there was no particular issue that motivated him to run, and didn’t yet know what issues he would focus on if elected.

Suzanne LaFrance: LaFrance made her way to the Assembly via the PTA. She won her seat in 2017 by about 600 votes. She was a leader on raising Anchorage’s smoking age to 21, and also takes an interest in public safety.

Rick Castillo: Castillo is a military veteran who graduated from the University of Alaska Anchorage in 2015, and now works in telecommunications. He describes himself as a conservative, and in July hosted a fundraiser for himself and the Anchorage Young Republicans.

Dave Donley: Donley is the incumbent. He stirred up controversy when he retained his position on the board after being appointed deputy commissioner of the Alaska Department of Administration by Gov. Mike Dunleavy. Before joining the school board, Donley served in the state House of Representatives from 1987 to 1992 and then in the state Senate from 1993 to 2002.

James Smallwood: Smallwood is challenging Donley after backing out of a school board race in 2019, when he challenged Margo Bellamy and Kai Binkley Sims. Smallwood dropped out of the race to support Bellamy, as he didn’t want to split the progressive vote. Bellamy won the seat. Smallwood challenged Donley in 2017, but only got 21% of the vote.

Andy Holleman: Holleman won his seat in 2017 by about 50 votes. He’s the former president of the Anchorage Education Association.

Phil Isley: Isley ran for the Alaska House of Representatives three times, and also has run for Assembly and the school board. He has not won an election, and always has run as a nonpartisan candidate. In general, he speaks against big government.

John Cates: Cates is a family practice and sports medicine physician who started his career in pediatrics. He said working with children prompted him to run.

Editor’s note: This post has been updated to include Stephany Jeffers as a candidate for the District 2 Assembly seat.