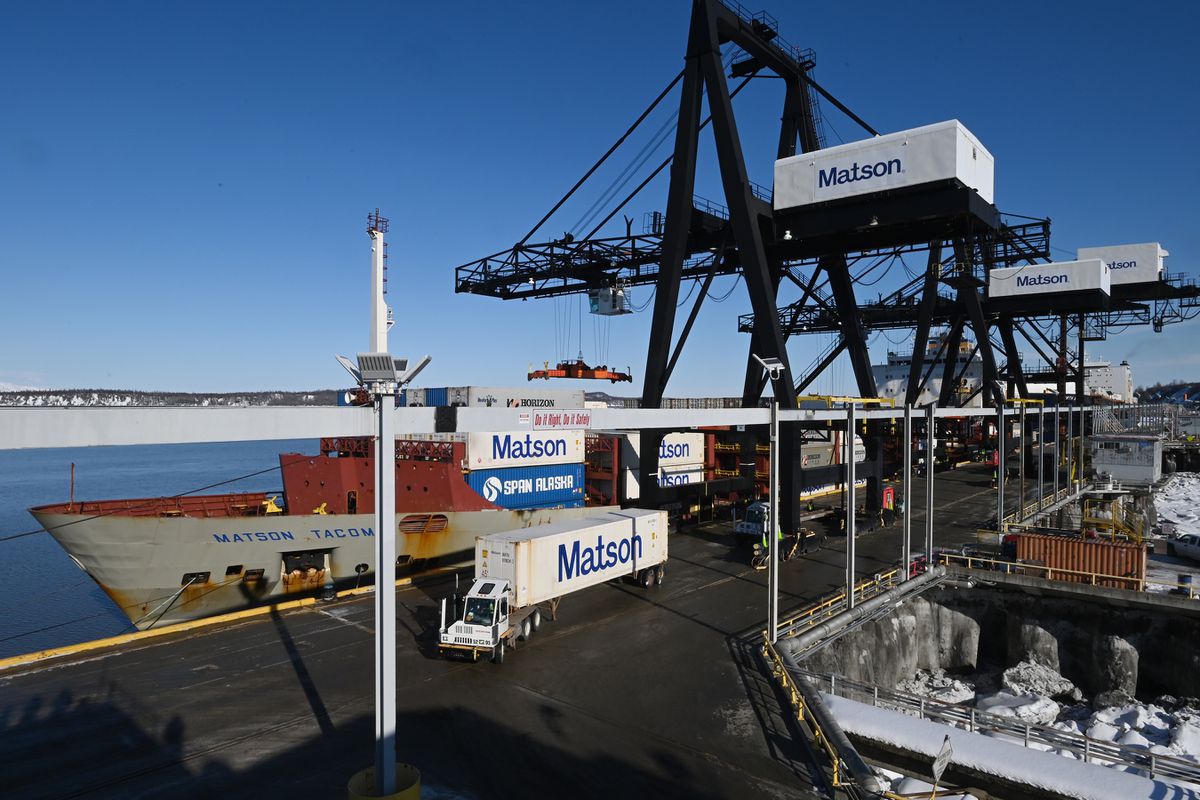 Containers are unloaded from the vessels Matson Tacoma, foreground, and TOTE Maritime's North Star, as the uninterrupted flow of goods arrived at the Port of Alaska as scheduled on Sunday, March 22, 2020. (Bill Roth / ADN)

Containers are unloaded from the vessels Matson Tacoma, foreground, and TOTE Maritime's North Star, as the uninterrupted flow of goods arrived at the Port of Alaska as scheduled on Sunday, March 22, 2020. (Bill Roth / ADN)

On Sunday morning, Anchorage Mayor Ethan Berkowitz stood on a third-story deck overlooking the Port of Alaska, where workers were unloading 1,200 shipping containers of goods.

In two days, another 1,200 will arrive on Anchorage’s shore.

Berkowitz was intentionally addressing news media with a busy port as the backdrop. He wants to dispel rumors that the coronavirus has disrupted the supply chain, which has prompted residents to make a run on grocery stores, clearing out pasta, rice, meat, baking ingredients and cleaning products.

Every Sunday and Tuesday, about 600 containers each from Matson and Tote shipping companies arrive in Anchorage and are unloaded. The goods supply local stores, but are also ground- and air-shipped throughout the state, reaching some of the most rural communities in the country. That supply line has not been interrupted, and is expected to remain intact for the foreseeable future, the mayor and shipping executives assured the public Sunday.

[Alaska’s coronavirus response has escalated as the number of cases has grown. Here’s where things stand.]

Berkowitz was speaking about 11 hours before his latest emergency order kicks in. At 10 p.m. Sunday, the city is supposed to “hunker down.” That means everyone who can work from home should. Trips out of the house should either be necessary trips to the grocery store or bank, or outdoor recreation where you’re far apart from others. Nonessential businesses should close.

Berkowitz’s chief of staff, Jason Bockenstedt, said while the city could levy fines on those who violate the order, that’s not the plan right now.

“Seriously people, use common sense,” Bockenstedt said, adding people should think about family members with vulnerabilities. These orders are about protecting people and saving lives.

Bockenstedt said the response to Berkowitz’s emergency order, announced Friday, has been largely positive. But he said many have reached out to the city for clarity. The city posted a “frequently asked questions” sheet on its website. Further, anyone with questions about how to comply with the order can email covid-19@anchorageak.gov or leave a voicemail at 907-343-4019.

In the past week, the coronavirus started to move through the state as it had through many in the Lower 48. Officials have announced 22 confirmed cases in Alaska, a tally that’s growing daily. City and state governments are imposing new regulations to slow the spread.

In Anchorage, bars and restaurants were closed on March 16. In the following days, the food supply at stores dwindled. Staples, like pasta and rice, became precious commodities. Costco had a line out the door, and ran out of many coveted items.

Berkowitz said he does not want government to have to step in and tell businesses that they need to limit how much people can buy to combat hoarding behavior from shoppers. But, he said, some are already posting signs limiting popular items to one per customer.

“These are the kinds of restrictions that businesses implement all the time,” he said. “I would just ask people to use common sense. We can do all kinds of things with government mandates. I don’t think that’s the right approach.”

Berkowitz and shipping officials said Sunday that goods were being delivered as normal. There is plenty to go around if people resume normal behavior.

“People should go back to the normal buying habits and all the goods will be replenished,” said Alex Hofeling, Tote’s Alaska general manager and vice president.

Dylan Faber, community affairs manager for Matson, said his company’s operations have not been impacted by the virus and delays due to the virus aren’t expected.

Dave Karp, managing director for Saltchuk’s Alaska operations, said the supply chain remains intact throughout the state. Saltchuk works with air and ground transporters to get goods to rural parts of the state. He said he recently talked to shipping partners who are maintaining operations.

“All of their infrastructures are up and running, cargo is moving on schedule,” he said. “In some cases, if there’s a silver lining, the reduction in passenger travel to bush destinations has actually created more capacity for mail and freight.”

How the virus will run its course in the United States and Alaska is up to speculation. Faber said it’s hard to guarantee that goods from the Port of Tacoma will continue to make it to Alaska uninterrupted through the end of the pandemic. But he said the company is working with governments to ensure proper protocol is taken, and that it can adjust to unforeseen changes. The company has additional vessels at the ready if Alaska’s demand increases, he said.

Berkowitz said if there is a problem with shipping food and supplies to the state, Alaskans will know.

“When I say that we are in this together, that means we are going to share information,” Berkowitz said. “We are going to make sure that the public stays as completely informed as possible. We’re going to do everything we can show that my neighbors, and you and all of Alaska knows what’s going on.”

To sum it up, Berkowitz had a simple message: “Stay chill.”

“Logistics are working like they’re supposed to work. There’s no need to take more than you require.”