Anchorage bars and restaurants say they desperately need more aid. But so far, they’re ‘stuck in the middle of politics.’ 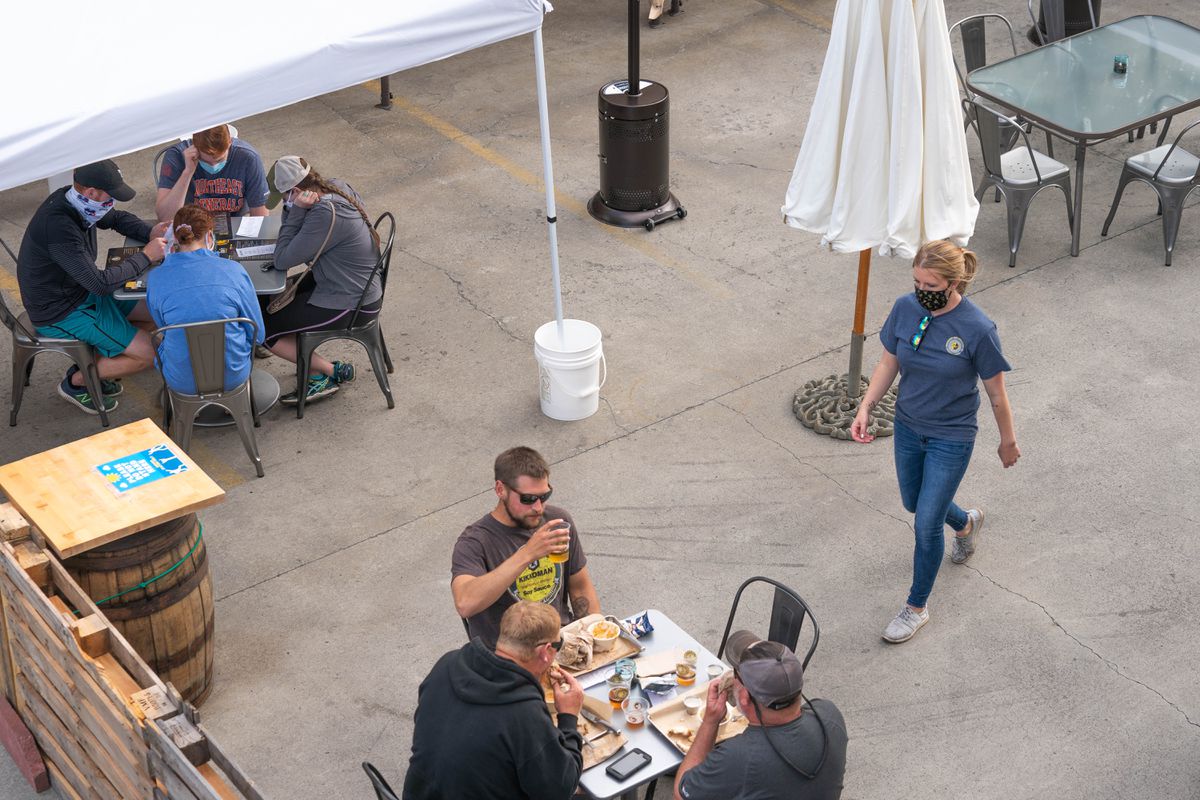 People dine in an outdoor area set up in the parking lot of Midnight Sun Brewing on Thursday, Aug. 13, 2020. (Loren Holmes / ADN)

People dine in an outdoor area set up in the parking lot of Midnight Sun Brewing on Thursday, Aug. 13, 2020. (Loren Holmes / ADN)

More than a week into the second near-shutdown of Anchorage’s bar and restaurant industry, business owners and employees are asking for help.

They are seeking an increase in direct payments funded by the city and state’s chunk of federal COVID-19 relief dollars.

But Sarah Oates, president and CEO of the Alaska Cabaret, Hotel, Restaurant and Retailers Association, said that as they’ve pushed for more aid, there’s been a lot of “finger-pointing” from city and state officials.

“I think workers and businesses are stuck in the middle of politics,” Oates said in an interview Tuesday.

Last month, Anchorage Mayor Ethan Berkowitz signed Emergency Order 15, restricting bars to delivery and takeout and eliminating indoor service at restaurants for four weeks starting Aug. 3. Berkowitz said earlier this week that his team will continue to reevaluate the order and could lift it early if cases remain lower than they were in July.

The emergency order set off another wave of economic pain for the Anchorage service industry. Normally, Anchorage has about 12,000 bar and restaurant workers, said Bill Popp, president and CEO of the Anchorage Economic Development Corp. When businesses were initially shut down in April, that figure dropped to 7,400.

Popp said there were likely modest improvements when restrictions eased for a while, but with the recent emergency order, “we are probably looking at a loss of a couple thousand jobs for the month of August,” he said.

CHARR had already expected a 30% permanent closure rate of restaurants over the next year, with the closure rate among independently owned establishments more than double that, Oates said. But that was before the second shutdown.

“That number will certainly be higher now,” she said.

Popp and Oates were among the signatories on an opinion column in the Daily News this week calling on the state to give more money to the hospitality industry.

In a Wednesday interview, Gov. Mike Dunleavy said federal CARES Act funds were given out to local governments statewide because they can more nimbly distribute money to businesses. The state has to go through an appropriation process that requires the Legislature to convene.

Of all the communities in Alaska, only in one do businesses appear to be caught in the middle of politics, Dunleavy said.

“That’s our local community down in Anchorage,” he said.

Local politicians in Anchorage take issue with the governor’s position, arguing the state could do more to free up funds for business assistance.

Meanwhile, Oates and Lee Ellis, board president for the Brewers Guild of Alaska, last week submitted a proposal asking the Assembly to carve out $21 million in CARES Act funds to go to business owners and employees.

Both Oates and Ellis say their proposal asked for the bare minimum.

“What would it take to keep them alive for a month? That’s it — just keep the lights on, keep the rent paid,” Ellis said.

On Wednesday, the Anchorage Assembly amended the city’s CARES Act spending plan to allocate an additional $7.1 million for the tourism and hospitality industries, on top of the $7 million they approved for those industries the week before.

It falls short of what the industry asked for. Still, $14 million for hospitality businesses is a big step in the right direction and the Assembly is doing the best it can at the moment, Ellis said.

“We’re deeply appreciative of it, and I think it will allow us to at least get the program going and get at least the most affected and the most endangered businesses funded and funded quickly,” Ellis said.

On Thursday afternoon, the Berkowitz administration met with CHARR representatives. Berkowitz’s chief of staff, Jason Bockenstedt, said it went well. Bockenstedt said no industry will be happy with what the city is able to give them, but the extra money is helpful.

“I certainly didn’t hear from them requesting additional funding,” he said. “I think they certainly had some ideas we’re looking at in terms of how to distribute the funds as quickly as possible.”

Oates was not available for comment after the Assembly allocated more funds, or after the meeting with the city. In an earlier interview, she said the city is responsible for mitigating the damage caused by Emergency Order 15.

And she said the industry also needs financial assistance from the state throughout the pandemic.

“Almost none of those businesses have received any aid from the municipality or from the state,” Oates said. “They’re sitting on hundreds of millions of dollars that could help these businesses.”

Alaska overall got $1.25 billion in federal funds through the CARES Act. Local governments around the state received $568 million of that, with Anchorage’s portion totaling $156.7 million.

Earlier in the summer, the city allocated $6 million for a small business relief fund. The city also approved $23 million in rental assistance, which would be open to hospitality workers as well as those in other industries.

When the city lifted business capacity restrictions in May, Oates and others in the industry voiced apprehension. The cost of opening businesses back up only to later shut them down could be a death knell, they said.

“We did continually caution that whatever the phased reopening looked like, it needed to be done methodically to ensure that businesses would not be shut back down,” Oates said. “Here we are.”

In a Wednesday interview before the Assembly approved the additional funds, Assemblyman Forrest Dunbar said he heard the industry requests. But he said there are a lot of people and organizations that are hurting, and the city only has so much money.

“We just don’t have the kind of resources the state does,” he said. “That is the scandal here. There is this huge pot of money that just hasn’t been distributed.”

Dunbar was referencing the $290 million in CARES Act funds the state put in its own business relief program, called AK Cares. The grant program launched June 1 for grants between $5,000 and $100,000 on a first-come, first-served basis.

As of this week, the account has more than $125 million still available. Applications totaling $147 million are still being processed, but some of those could be denied.

Dunleavy said response to the virus is difficult. No one is punishing businesses, but he said the Anchorage Assembly should respond to the needs of the community.

“I believe it’s the city’s obligation to deal with their local issues that are manifested as a result of this virus, with the funding that has been given to them,” Dunleavy said.

Rep. Zack Fields, an Anchorage Democrat, said he wrote an amendment to the bill that allocated the money for the state, specifically stating no restrictions on operations grants for businesses. But Gov. Dunleavy and his administration imposed a rule that businesses that have received more than $5,000 in federal Paycheck Protection Program money or a federal economic disaster loan are not eligible for Alaska Cares funds. That, Fields said, has resulted in too much of the money remaining in an account.

“The Dunleavy administration’s failure to issue small business assistance is massive incompetence that is pushing small businesses into bankruptcy,” he said.

Dunleavy said the state will continue to look at ways to help businesses, including removing the provision barring businesses that received federal assistance. But the purpose of disbursing money to local governments was to get money out into those communities quickly, he said.

Dunleavy’s spokesman, Jeff Turner, said in an email that changes to that rule would go through the legislative process. Fields said his staff was told by nonpartisan legislative attorneys that the administration can undo that rule on its own, without convening the Legislature.

Dunleavy said the idea behind that rule was to give businesses that maybe weren’t familiar with the federal Paycheck Protection Program some assistance first. Essentially, it was to stop any double-dipping.

Alaska businesses received more than $1.3 billion from 12,087 PPP loans, according to the U.S. Small Business Administration.

But most of that aid has now run dry, Ellis said. And since many businesses received some sort of federal funding in the spring, the Dunleavy administration’s rule means “all but the tiniest” businesses can’t get the state funds.

Ellis, president of Midnight Sun Brewing, said that as the slow winter months approach and the pandemic drags on, business prospects are looking grim.

“It’s like a slow-moving train wreck and you can’t get out of the way,” Ellis said.

Summer months are often the most profitable for many businesses and sustain them for the remainder of the year. But like many others in the industry, Ellis said that Midnight Sun Brewing has been “operating in the red” since April.

“We have a very long, hard winter coming,” he said.

Ellis said that releasing state funds to businesses at the right time will be key to surviving “that last crucial leg” this winter.

“If nothing else is coming down the pipe, that’s going to be the last thing to save businesses in Alaska until the vaccine and the tourist season and everything else comes back together,” Ellis said.

Jennipher Jenner is one of two owners of Crossroads Lounge, a more than 40-year-old bar in Anchorage currently prohibited from providing on-site service by the emergency order.

Jenner applied for a Paycheck Protection Program loan early in the pandemic, but all of that money is now gone.

At this point, “we have literally been shut down for an entire fiscal quarter,” Jenner said. “I don’t know how any small business can survive that unless they are subsidized.”