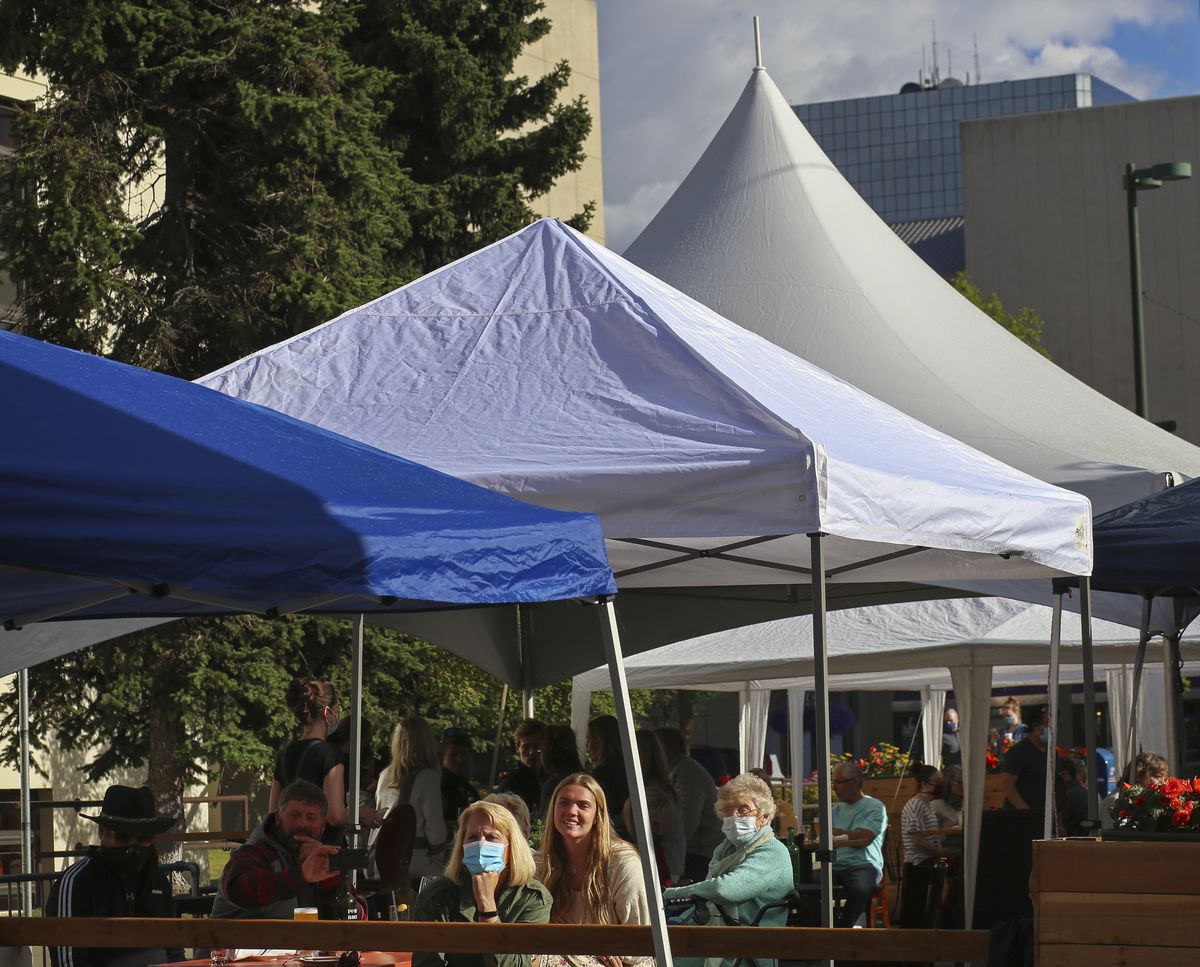 People dine in the outdoor seating area on G Street and listen to live music in Anchorage on Aug. 7, 2020. (Emily Mesner / ADN)

People dine in the outdoor seating area on G Street and listen to live music in Anchorage on Aug. 7, 2020. (Emily Mesner / ADN)

Wind gusts threatened to lift patio umbrellas and rain drizzled onto tablecloths one evening last week, but diners in the parking lot outside Little Italy Restaurante in South Anchorage still let out an “opa” cheer, a Greek expression of joy, when servers brought the flaming cheese.

“They were like, ‘Hey, we got a glass of wine and dinner, we’re happy,‘” said P.J. Gialopsos, an owner of the Greek and Italian restaurant.

“I was almost in tears, because no one minded the wind and the rain,” she said, her voice breaking, on Monday. “Well, they did, but they were being accommodating.”

Welcome to outdoor dining in Anchorage, months after the COVID-19 pandemic brought shifting restrictions that have sparked widespread layoffs in the service industry and have business owners worried about permanent shutdowns.

Restaurant owners say sales were slowly recovering this summer. But they were taken aback when a municipal emergency order halted indoor dining for four weeks starting on Aug. 3 amid a surge of coronavirus cases, with autumn weather closing in. Bars were closed entirely except for takeout and delivery.

[Even with state grants in hand, small businesses worry about ‘long, lean winter’ ahead]

A few Anchorage establishments such as Kriner’s Diner initially refused to close indoors, leading to legal action from the municipality. Restaurant owners and hospitality industry leaders are also calling for more financial assistance from the municipality and the state to help them limp through the restrictions.

It wasn’t easy, but most Anchorage restaurants complied with the order from the start. With just a weekend to prepare, many hastily set up makeshift outdoor dining areas to keep their operations alive. They’ve gotten help from other businesses, plus generous patrons who have turned out on sunny days — and wet ones, too.

The changes have come with extra costs, owners say.

“There’s a lot of gear-shifting in the industry at a time when no one can afford things, but you have to do it,” Gialopsos said. “Right now, I’m just keeping the doors open. Without revenues, there will be closures.”

And on Monday, Gialopsos purchased halibut fishing weights to prevent newly created fabric-and-pipe windbreaks from blowing across the parking lot.

More than 40 applications, most for restaurants, breweries and bars, have been approved for temporary outdoor areas following a municipal order in June, said Carolyn Hall, a spokeswoman with the mayor’s office.

Another 10 applications are being processed, she said.

Some entities have provided extra space for establishments. The Anchorage Downtown Partnership, working with the municipality, pursued an initiative starting in May that closed sections of three downtown streets this summer to support pedestrian traffic in front of businesses.

Reaction to a street closure on G Street, starting in late June in front of several businesses, added to the tension.

Some restaurant owners and conservative media criticized the action. They say it allowed Crush Bistro, whose owners have business ties to the mayor, to expand outside into the street, possibly giving it an advantage over other Anchorage restaurants with limited outdoor space and scarce time to prepare for curbside dining.

The mayor has no ownership stake in Crush. Two of his business partners in the restaurant industry, Laile Fairbairn and Joseph Dugan, own the bistro, according to Alaska business license records.

Berkowitz and his wife, Mara Kimmel, together own 10% of Spenard Roadhouse and 5% of South Restaurant and Coffeehouse. The mayor also holds a 6.5% ownership stake in Snow City Cafe, according to state business records. The involvement and income is detailed on the mayor’s disclosure reports, filed with the Alaska Public Offices Commission.

Critics asserted the four restaurants may have had inside knowledge of the dining closure before it was announced. Fairbairn, president at Locally Grown Properties, which provides administrative services to the four restaurants, said that isn’t true.

“Definitely not,” she said. “We did not hear anything from Ethan about this at all. We just paid attention to the news.”

Berkowitz has said no businesses were given advance notice of the city’s plans to close indoor dining.

In a Facebook post Saturday, Fairbairn said the heated discussion around the G Street closure led to people boycotting their businesses and threatening staff.

She said she empathizes with the many restaurants struggling to stay in business.

“There are folks who aren’t sure how they’ll make it through,” she said.

The mayor has called the order unfair to bars and restaurants, but has said they are “bearing the price, being the shield that protects the community.”

Outdoor dining not possible for everyone, but some are making the most of it

EasyPark, part of the municipality, has also offered to free up parking spaces outside restaurants.

For some restaurants, outdoor dining isn’t an option at all.

Altura Bistro in Midtown Anchorage is focused again on takeout, just like in the early days of the pandemic-related closures this spring, said owner Nathan Bentley.

Indoor dining had been steady, so the change was a disappointment, he said.

The parking lot is too slanted to support serving customers outdoors, and the sidewalk is too small to meet the 10-foot distancing requirement for tables, he said.

“I’m not available to do outdoor dining,” he said. “And I’m not the only one with this problem. But I applaud businesses that can do that.”

But for the restaurants that can make it work, some are going all in. After receiving a permit, 49th State Brewing Co. in downtown Anchorage quickly set up a heated tent to convert the parking lot it owns into an “Augtoberfest” beer hall, said co-owner David McCarthy.

Diamond Parking leases the parking area, but quickly agreed to clear the space to help out, McCarthy said.

The restaurant decided to make the most of the closure, McCarthy said.

“We wanted to do something fun,” he said. “We wanted people to have a divergence from the chaos of the pandemic.”

The brewery’s outdoor beer hall offers a “dog menu” that includes a grilled hamburger patty and a dog park so diners can eat with pets, he said.

There’s also a bike corral guarded by a restaurant employee, to attract customers off the citywide Moose Loop bike trail.

And diners get a free beer stein, made of sturdy plastic, with their brew.

“You can sit outside, bring the dog, bring your bike and take the stein home with you,” McCarthy said.

But the outdoor setup cost more than $10,000. The restaurant is operating at only half capacity.

And the indoor dining restriction forced the brewery to lay off about 25 employees, hopefully only temporarily, he said. The restaurant had just rehired them.

“It was probably one of the hardest days of being in business in years,” he said. “To watch employees standing outside calling their loved ones in tears, not knowing what they’ll do. That’s the hard part when these mandates come down.”

In the pandemic, innovative ideas and good marketing have been key, McCarthy said.

It worked for Magnetic North Brewing and the Melt food truck, new businesses created after COVID-19 arrived in Alaska.

They teamed up for a successful day of sales on Saturday, after their outdoor plans made the rounds on a popular dining Facebook page.

Jeremiah Christian, owner of the one-man brewery, said he reached out to the grilled-cheese sandwich food truck to give a meal option to beer drinkers.

He rolled aging barrels into the parking lot, standing them up for tables. He rigged up a tarp shelter. To save money, he welded together metal stands to mark social distancing requirements.

More than 200 customers arrived over about five hours, some bringing their own lawn chairs, said Jason Anderson, Melt’s owner.

And the brewery, launched in April, ran out of beer.

“It was the best day since I opened,” said Christian.