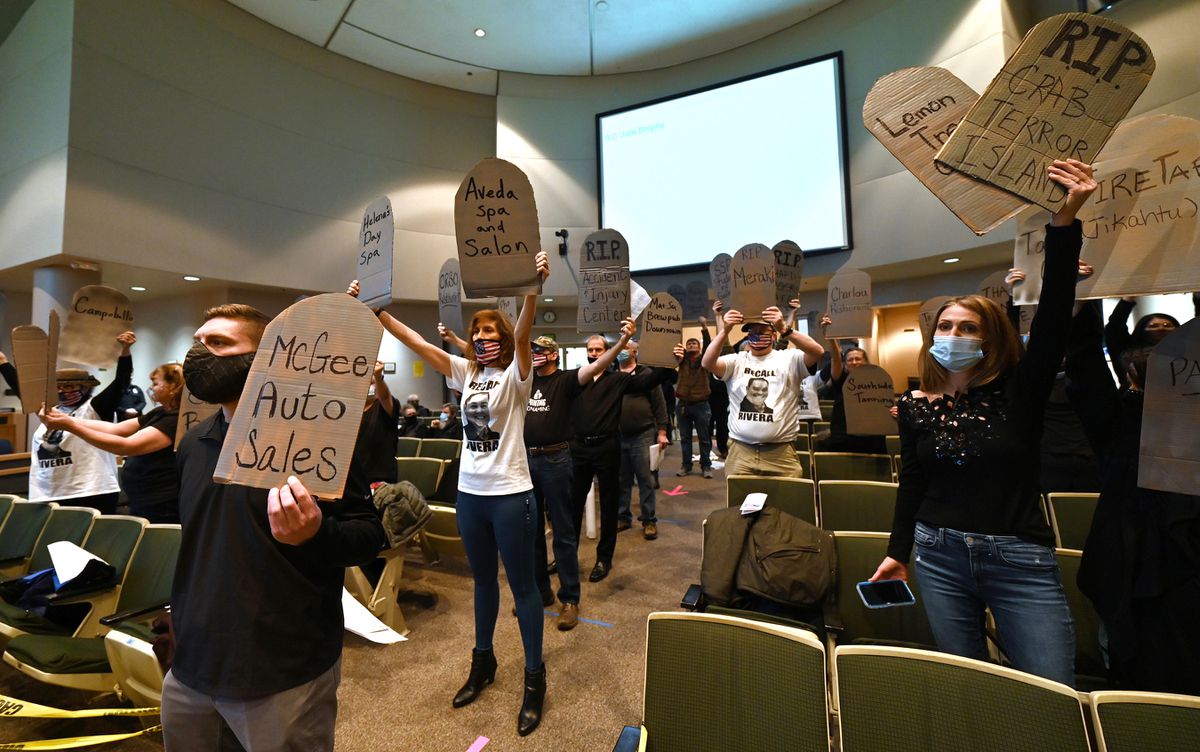 The audience attending the Anchorage Assembly meeting on Tuesday, Jan. 12, 2021, held up cardboard tombstones as Julie Brophy read the names of "dead businesses in Anchorage" during the pandemic. (Bill Roth / ADN)

The audience attending the Anchorage Assembly meeting on Tuesday, Jan. 12, 2021, held up cardboard tombstones as Julie Brophy read the names of "dead businesses in Anchorage" during the pandemic. (Bill Roth / ADN)

The Anchorage Assembly on Tuesday night debated issues underscored by division in both the city and the nation in recent weeks, including passing a resolution condemning last week’s violence at the U.S. Capitol and extending the city’s declaration of an emergency and pandemic-related restrictions.

By passing the resolution, the Assembly both joined and recognized other elected officials in condemning the riot, and urged citizens to “work together to strengthen and protect our cherished democratic institutions.”

Assembly member John Weddleton, who sponsored the resolution with member Suzanne LaFrance, said that the measure was not meant to be political.

“We had a very profound event on Jan. 6,” Weddleton said. “It was shocking and it had to shock everyone, no matter what political persuasion. You have, you know, a protest evolved into a riot that led to occupying our Capitol — I mean it’s incredible.”

Though Assembly seats are technically nonpartisan, political fault lines among the Assembly members grew starkly apparent during an ensuing robust debate, which sometimes became tense, as jabs were exchanged between more liberal and more conservative members. It also elicited some outbursts from meeting attendees.

Jamie Allard, who represents Eagle River, argued that the municipality did not take similar actions to condemn violent actions during riots and protests in the Lower 48 last summer.

“This resolution isn’t helping anybody. This is political posturing, and it needs to stop,” Allard said, who offered the lone no vote on the resolution.

Christopher Constant, who represents downtown, said that the various racial protests and riots that have occurred throughout the country’s history are incomparable to a siege on the U.S. Capitol and an attempt to overturn a fair and legitimate national election.

A woman in attendance was escorted away from the podium after yelling during a debate over whether to include language in the resolution that identifies the group as Trump supporters.

Assembly member Crystal Kennedy, who also represents Eagle River, said she was appalled by last week’s violence and offered an amendment to tweak the language of the resolution in order to acknowledge that the small group which attacked the Capitol did not represent all Trump supporters.

“I want to make sure that if we put forward a resolution like this, that we are not trying to paint all Trump supporters with this broad brush — that’s not fair,” Kennedy said.

The language of the resolution was eventually changed through the amendment process to recognize that the Alaska electors who were there as part of the electoral college process did not participate in the violence.

Allard, who said she does not condone any violence, vehemently opposed the resolution.

“We are accusing individuals that haven’t even gone to trial, haven’t even had a jury determine whether they’re guilty or innocent,” she said.

Allard later called on a member of the audience to speak to about her own experience at the Capitol last week.

“I personally saw tens of thousands of Americans peacefully protesting,” said Kristine Schuster, who attended the gathering at Washington, D.C. “And I think it is absolutely outrageous and unfair to assume that everybody was invading the Capitol.”

Still, the Assembly retained language that specified the riot was carried out by Trump supporters.

“I certainly didn’t read it as an attack or, you know, aimed at all Trump supporters,” Assembly member Kameron Perez-Verdia said. “I think it’s important that if we’re to do this, that we say what happened and who did it. And a group of of Trump supporters did this.”

Much of the meeting, which covered multiple other items and will reconvene Thursday, also centered on a debate regarding the seventh extension of the Assembly’s pandemic-related declaration of emergency, first implemented in March. The declaration passed 8-2, with Allard and Kennedy voting against it, and the extension runs through April 16.

The city officials said the extension helps in the municipal response to the pandemic, and without it, the acting mayor’s emergency orders would have lapsed out of effect.

The current emergency orders include a mask mandate, public gathering restrictions and capacity restrictions on many businesses, among others.

The capacity restrictions, which have been most severe for restaurants, breweries and bars, have become a focal point of controversy in an ongoing debate over how best to handle the coronavirus pandemic in the city. In December, Emergency Order 16 shut down the hospitality industry entirely to indoor dining for the month.

During a period for public comment at the beginning of the meeting, Anchorage resident Julie Brophy led a visual display of protest against the continued use of emergency powers to enact such restrictions. Brophy is also a sponsor of a petition to recall Felix Rivera, chair of the Assembly and Midtown representative.

“Anchorage used to be a vibrant and thriving community, but now people are closing their businesses, losing their life savings and windows are boarded up all over town,” Brophy told the Assembly.

She then read a long list of businesses which she said have closed as a result of the city’s pandemic restrictions.

Behind Brophy, a group of people — many wearing “Recall Rivera” T-shirts — stood in the Assembly chambers and held up pieces of cardboard cut into the shapes of gravestones and bearing the names of the shuttered local businesses.

Some of the businesses on Brophy’s list have recently announced closures, including the Hard Rock Cafe downtown. Some on the list have publicly cited the pandemic and restrictions as the driving reasons behind the closure, such as former Midtown restaurant Table 6, while the closures of others listed could not immediately be confirmed.

Many members of the public who spoke out said that they have been directly impacted by the economic consequences of months of on-and-off closures of the hospitality industry and other restrictions on businesses.

Some who spoke said the restrictions are an abuse of the Assembly’s power. A few even accused members, without evidence, of having nefarious motives, and implied that the Assembly is using what they said is an unnecessary emergency declaration to access federal emergency relief money.

“It doesn’t matter that you say there are some good things happening, when you have basically impacted people’s lives to this extent that they can’t get past that bad thing. So there is a trust issue,” Kennedy said. “And the longer you extend things like emergency orders and keep them held basically captive by their own government to these kinds of restrictions, the more they distrust.”

Acting Mayor Austin Quinn-Davidson at the beginning of the meeting said that Anchorage, through its sacrifices, has managed to reduce the spread of coronavirus and protect its hospital capacity at a time when the pandemic is surging through much of the country.

She also cited a state report released Tuesday that found Anchorage’s mask mandate and a closure of indoor dining in August helped reduce the spread of the virus.

“Our goal now is to honor the sacrifices that so many in our community have made to get us here, and to prevent a rapid surge in cases,” Quinn-Davidson said. “We are experiencing a level of COVID-19 transmission and test positivity rates that are similar to October levels, but the risk we face today may be greater than what we faced in October. New strains of the virus are believed to be significantly more transmissible are being detected across the country. “

There is no evidence that the virus variants have reached Alaska yet, she said, but there is concern that it could spread more rapidly than vaccinations can counterbalance, driving up cases and demand on hospitals yet again.

Heather Harris, director of the Anchorage Health Department, said that the department needs time for vaccinations and that it would like to see a vaccination rate of 60% to 75% in the city to have a strong impact.

Still, there was debate among members over the three-month length of the extension. Assembly member John Weddleton suggested an amendment that would have shortened the extension to end in March, but it was voted down by other members.

Some city leaders, including Assembly member Meg Zaletel, said it is important to have a three-month extension because Anchorage public schools are scheduled to begin reopening next week, and it has announced that all of its schools will be open by its fourth quarter in April.

Zaletel also said there are several other important but less controversial emergency orders kept in effect by the extension, and the emergency status also allows municipal employees to continue to telework. These issues need to be addressed through ordinances before the city can move out of its emergency state, she said.

She and other members said they would like to see the city take concrete steps in that direction.

Last fall, the Assembly indicated that it was moving away from the emergency declaration.

Weddleton and member Suzanne LaFrance had at one point announced they would work on a project to translate some of the emergency orders into ordinances so that the Assembly could end its emergency declaration, but it has not yet taken those steps.

“I think that those issues that seem to not be controversial — and even masking which is — could still be a part of that project and one that I hope to pursue and reach out to them to do in this intervening time,” Zaletel said.

The Anchorage Assembly has extended its Tuesday meeting to reconvene on Thursday at 6 p.m. At the upcoming meeting it will consider an ordinance to establish a formal government relationship between the municipality and the Native Village of Eklutna, along with other agenda items.

The Assembly is also seeking a way to temporarily fill Quinn-Davidson’s West Anchorage seat, which became vacant once she took on the role of acting mayor. Two possible solutions — a resolution presented by Allard and Kennedy and an ordinance presented by Kameron Perez-Verdia, the West Anchorage district’s other Assembly representative — will be discussed at a public hearing Jan. 26.