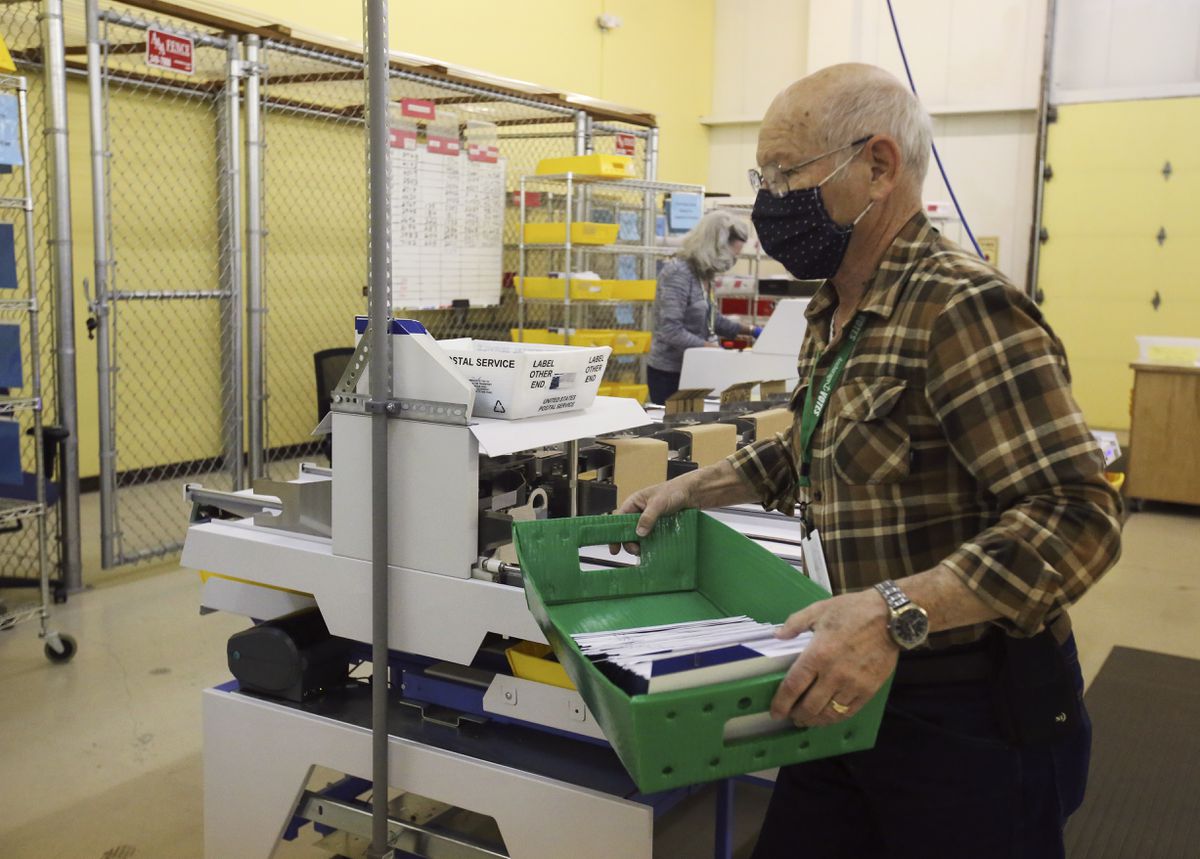 Jerry Laycock transfers a box of election ballot envelopes to a shelf for processing at the MOA Election Center in Anchorage on Wednesday, May 12, 2021. (Emily Mesner / ADN)

Jerry Laycock transfers a box of election ballot envelopes to a shelf for processing at the MOA Election Center in Anchorage on Wednesday, May 12, 2021. (Emily Mesner / ADN)

Dunbar, an Assembly member from East Anchorage, had 37,872 votes.

Dunbar had been slightly ahead on runoff election night with a slim lead of 114 votes, or a 0.16% margin.

Election workers are continuing to process ballots and thousands more votes have not yet been counted, leaving the race too close to call. About 4,000 more ballots were counted Wednesday.

“We look at them as promising,” Bronson said of Wednesday’s preliminary results. “We kind of knew that later ballots skew in our direction.”

“Yesterday we were up. Today we’re down, and we’ll see how things look tomorrow,” said Claire Shaw, Dunbar’s campaign manager. “We’re very, very grateful for the tremendously hard work of everyone — the clerk’s office and the election center.”

Dunbar was participating in an Assembly meeting and was not available to comment about the updated results on Wednesday evening.

[A contentious election for Anchorage mayor is nearing the finish line, revealing deep divisions on how the city should move ahead]

The elections center has received more than 84,300 ballots so far, according to a report from elections officials. More than 8,000 aren’t yet counted.

While there are many votes left to count, some say that previous voting patterns indicate the swing toward Bronson could continue. Others say it is still too close to call.

A spokesman for the fire department said it was possibly caused by a bad detector with the alarm system, and the issue was referred to the private contractor that provides the alarm system.

Bronson had said Tuesday that he expected the vote to tip in his favor as more ballots are counted because conservatives tend to vote later in elections and in person.

“We’ve got certainly a long ways to go,” Bronson said Wednesday evening. “Our goal is just to make sure that every legal ballot is counted in a fair and balanced manner.”

An RV belonging to Bronson’s campaign was parked outside the elections center on Tuesday and Wednesday. He said that observers for his campaign are monitoring the center 24/7.

“We’re logging everything,” he said.

For now, he said he had no comment on whether he had concerns with the ballot counting process.

Shaw said the Dunbar campaign is staffing observers at the elections center while counting occurs, but their campaign is not watching 24/7.

“Even with the fire drill, Barbara and the whole team there really had things under control,” Shaw said.

“We trust in the process,” she said.

During the April 6 election, Dunbar was initially ahead in preliminary election results, but Bronson moved ahead as more votes were counted.

Bill Evans, a former Assembly member and a candidate for mayor who did not make the runoff, said that in the most recent elections, ballots counted later tend to break more conservative.

“I would expect his lead to grow slightly over the next day or two,” Evans said. “Conventional wisdom would suggest that Bronson is in good shape, but you know, it certainly mathematically can go either way at this point.”

“With a margin under one-half of 1%, it is far too early to make any conclusions,” he said.

[Anchorage is at a turning point on homelessness. The mayoral candidates differ on what to do next.]

The campaign has been heated, highlighting divisions among residents over how the city should move forward. The candidates have considerably different approaches to the coronavirus pandemic, homelessness and reviving its economy.

Bronson announced his candidacy as a bid to bring conservative leadership to the city. He is an outspoken critic of the city’s response to the coronavirus pandemic, particularly of its economic restrictions and shutdowns of businesses.

A Bronson administration would mark a shift away from the more progressive leadership of current Acting Mayor Austin Quinn-Davidson and former Mayor Ethan Berkowitz.

Conversely, Dunbar has largely supported the city’s COVID-19 policies. He has said he wants to bring “fact-based leadership” to Anchorage.

The Anchorage Assembly is scheduled to certify the results of the runoff election on May 25. That certification is subject to the outcome of any recount, according to municipal code.