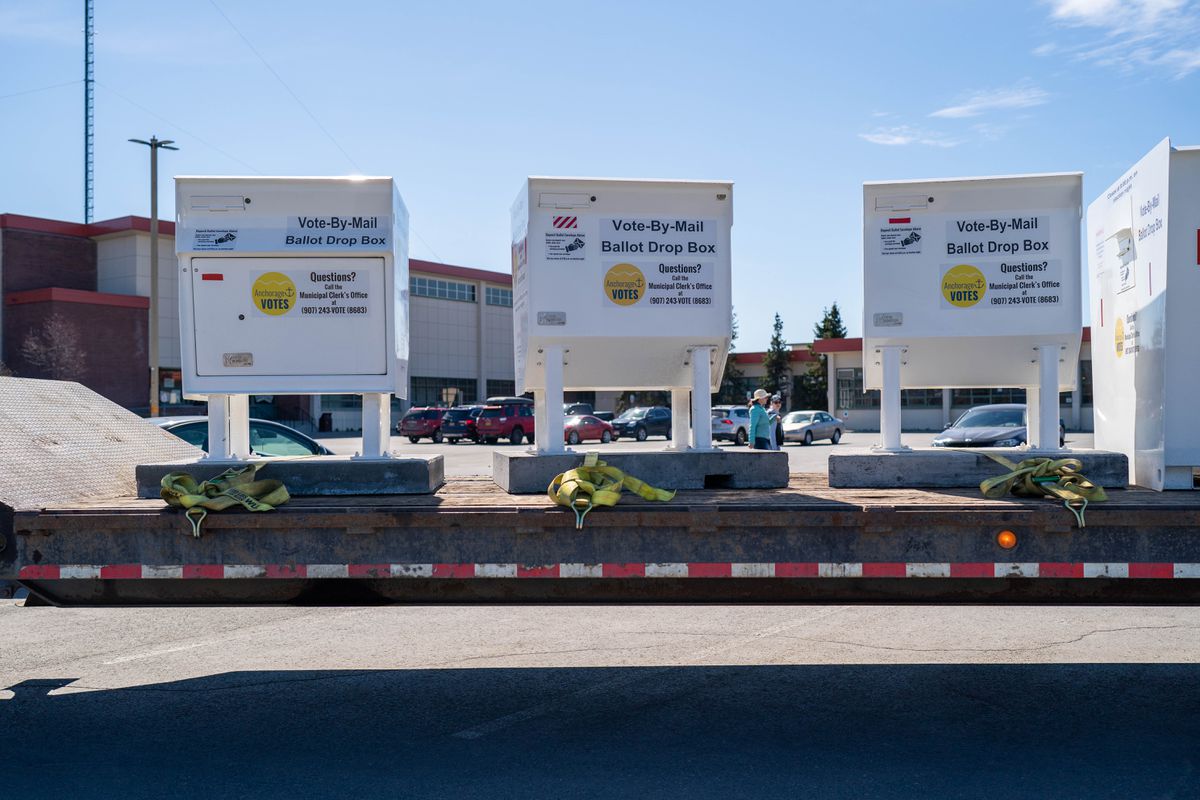 Vote by mail ballot drop boxes are collected on a flatbed trailer at West High on Thursday, May 13, 2021, in preparation for their transport to the municipal election center. The mayoral runoff election was on Tuesday, May 11, and the boxes have been locked since 8 p.m. on election day. (Loren Holmes / ADN)

Vote by mail ballot drop boxes are collected on a flatbed trailer at West High on Thursday, May 13, 2021, in preparation for their transport to the municipal election center. The mayoral runoff election was on Tuesday, May 11, and the boxes have been locked since 8 p.m. on election day. (Loren Holmes / ADN)

Dave Bronson widened his lead slightly over opponent Forrest Dunbar in the race for Anchorage mayor, according to another round of preliminary election results posted Thursday.

Bronson, a retired military and commercial pilot, had 40,810 votes. Dunbar, an Assembly member from East Anchorage, had 40,183 total votes.

Dunbar had been slightly ahead on election night by 114 votes, but after more votes were counted Wednesday, Bronson took the lead.

About 5,000 more votes were included in Thursday’s preliminary results.

“We are very happy with the updated results from the election today and the trend it shows,” Bronson said in a statement sent by text. “However, the campaign remains vigilant with the election process and will keep observing and watching until all legal ballots are processed.”

“It is still a really close race, and thousands of votes are yet to be counted. So, we are looking forward to seeing what the vote results look like tomorrow afternoon,” said Claire Shaw, campaign manager for Dunbar.

Observers from both campaigns are watching closely as counting continues.

Bronson’s team has parked an RV outside of the elections center for 24/7 observation of the building.

Intense involvement from campaign observers strained the election center earlier in the week, and on Thursday the municipal clerk held campaigns to the observation rules in city code, reducing the number of people from the campaigns who could watch the count. At times, the atmosphere in the elections center on Thursday was tense.

Election workers are still processing ballots and many more remain uncounted. The race has seen a record number of ballots cast, eclipsing the 2018′s record of 79,295.

So far, an estimated 89,000 ballot envelopes have arrived at the center. Additionally, in-person ballots cast at Anchorage’s three vote centers on election day have not yet been processed.

On Thursday, election workers began processing the last of the ballots that had been left in Anchorage’s secure drop boxes on runoff election day.

About 200 arrived by mail on Thursday. The number of ballots arriving by mail generally trickles off each day following election day.

Bronson was ahead by 0.78% on Thursday, surpassing the 0.5% threshold for an automatic recount. On Wednesday he led by 0.36%.

A recount could still be conducted if requested by a campaign or initiated by the municipal clerk. However, a recount is unlikely to change the outcome of the race.

The Assembly is scheduled to certify the results of the runoff election on May 25.

In the previous April 6 election, Dunbar was initially ahead, but as more ballots were counted, Bronson surpassed Dunbar and his lead grew each day.

In a post to his campaign’s Facebook page on Thursday evening, Bronson said that the race is still too close to call.

Workers will continue to process and count ballots as they arrive through next week.

Each campaign is allowed four observers in the center during the hours that ballots are being processed. Members of the public can also watch inside the building from designated areas.

Municipal Clerk Barbara Jones allowed extra campaign observers to be in the center as members of the public prior to Thursday, but on Thursday limited the number of observers allowed in the elections center.

It made it difficult for election workers to work, in part due to the amount of questions, Jones said.

“There were too many people,” Jones said. “We couldn’t manage them.”

At one point on Thursday afternoon, a tense exchange unfolded between Bronson’s campaign manager, Brice Wilbanks, another Bronson observer and the municipal clerk.

Jones asked the two to speak to election workers in a different manner and said that they owe the workers respect, saying that municipal and election staff are working hard.

“We don’t feel like you respect us,” she said.

The exchange was quickly resolved and Jones and another election worker then explained in detail to the Bronson observers an initial part of the ballot envelope sorting and counting process.

The Bronson campaign did not immediately respond to a request for comment.

The Anchorage mayor’s race has been heated, highlighting divisions among city residents. The candidates have considerably different approaches to the coronavirus pandemic, homelessness and reviving Anchorage’s economy.

Bronson announced his candidacy as a bid to bring conservative leadership to the city. He is an outspoken critic of the city’s COVID-19 response, particularly of its temporary business shutdowns.

Conversely, Dunbar has largely supported the city’s COVID-19 policies. He has said he wants to bring “fact-based leadership” to Anchorage