An Anchorage anesthesiologist is in charge of a plan to reimagine homeless shelters in the city. Who is he, and how’d he get here? 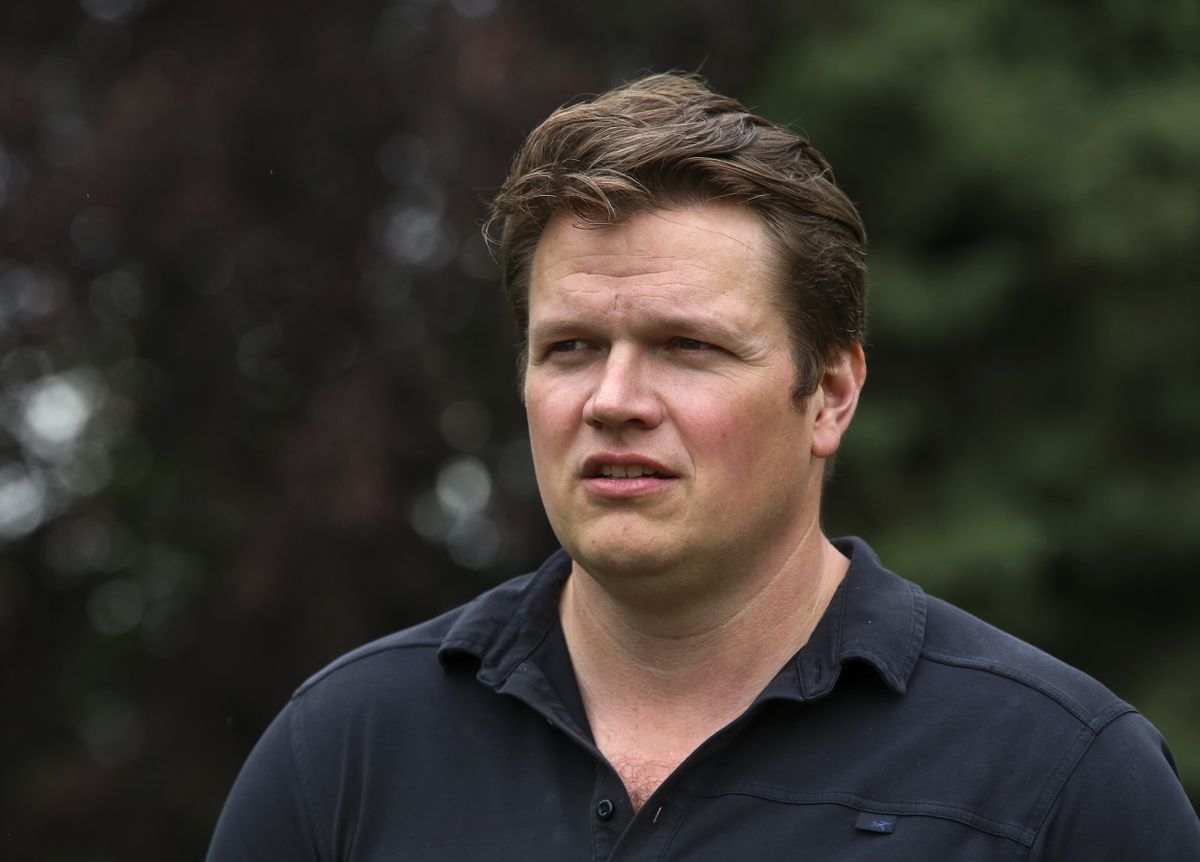 A few days before the Anchorage Assembly put the brakes on his plan to rapidly build a large-scale homeless shelter, Dr. John Morris stood in a Midtown park, contemplating what he could get done.

“We need to light a fire under some of this stuff,” he said. “Way too much thinking about it. We need to build it.”

Morris, 43, is an anesthesiologist by profession. On July 1, he also became Anchorage’s homeless coordinator, a position that hasn’t been particularly high-profile in the past.

But this is a different moment: The administration of conservative Mayor Dave Bronson had proposed building a homeless shelter capable of sleeping 450 people, owned by the city, a first in Anchorage history. Though a procedural move Tuesday by the Anchorage Assembly all but assured the project won’t be built on the original timeline — nor likely at the original scale — the city is now debating what could be a profound turn in its response to a growing, vexing problem of homelessness.

Behind the plan is Morris, a relative unknown who moved to Anchorage in 2015 and has no formal work experience in the homeless service provider world.

It was Morris who stood before the Anchorage Assembly on June 15 detailing the original concept: A large tented structure featuring state-of-the-art “navigation services” ranging from medical care to social workers on site, housed near the junction of Elmore and Tudor roads and completed before Halloween.

It is now Morris who is fighting for that idea to be preserved against a growing chorus of doubters who say it is too big, too hasty and not well planned. Some of those doubters have wondered aloud about Morris: Who is this guy? And what exactly is he doing here? And how did he take this on?

Morris says he has listened for months to experts on homeless services and is the right person to take an idea that’s already been piloted elsewhere and turn it into reality in Anchorage. He asserts that he’s motivated by a moral sense rather than political fortunes. Anchorage has a conservative mayor willing to spend big on a homelessness solution, which Morris says would involve much more than just emergency shelter.

Before June, Morris wasn’t a widely known player in Anchorage politics or city government. Now he’s in charge of what could be one of the most significant municipal efforts in decades.

Morris is 43 but looks younger. He favors an REI casual look — he wore Chaco sandals and khakis to Bronson’s inauguration.

He was raised in rural Pinch, West Virginia, about a 20-minute drive from the capital of Charleston. His father was a volunteer firefighter, and from childhood, Morris says, he rode along, glimpsing into the homes and lives of neighbors, some of whom lived in what he described as grinding poverty.

“I was doing bandages and going to car wrecks and stuff as a teenager,” he said.

By the time he was in high school, he was set on becoming a doctor. He graduated from Wake Forest University and attended medical school at West Virginia University School of Medicine before moving to Philadelphia for a fellowship. There, he saw a different kind of poverty from that of the rural West Virginia he grew up in.

Later, he worked as an anesthesiologist in Colorado and back in West Virginia. In 2015, Morris moved to Alaska for a job, also pulled by the proximity to outdoor activities. He noticed people living on the streets, or in distress, all over his new city — passed out in corners of parking lots, on sidewalks, at bus stops.

“When I first got here, I was always pulling over on the road, checking on people,” he said. “I couldn’t go to the frickin’ store without seeing someone.”

In time, he says, he felt himself becoming numb.

“I quit stopping and quit calling,” he said. “I did not like what I became.”

‘What is it that’s the problem?’

By his telling, Morris’ interest in homelessness issues in Anchorage traces back closely to his wife — a nurse he met when they both cared for the same patient. (The man was invited to their wedding.)

Cece Morris had an unusual childhood: She lived on a Mercy Ship, a floating hospital run by a Christian missionary organization that provides medical care to people in developing countries.

A few years ago, the two decided they were staying in Anchorage and wanted to devote time to homelessness. Instead of volunteering to hand out meals at a soup kitchen, they decided to dive into the intricacies of policy, they said.

During the pandemic, Morris set up virtual meetings with some of the organizations serving homeless people in Anchorage.

“I think they thought I was a doctor who might be good for a donation,” he said.

Morris says he asked what the organizations needed. Groups said they wanted to be connected to mayoral candidates, according to Morris.

The arrangement was unusual in that Morris doesn’t seem to “have a dog in the fight,” said Lisa Sauder, executive director of Bean’s Cafe. He seemed to really want to learn, she said.

“I’ve met with a lot of people over the years who want to get engaged, get involved,” Sauder said. “They start to understand how complex the issues are. A lot of them just drop off.”

Morris was becoming more public about his thoughts on homelessness policy, and authored an op-ed on the topic.

He met Dave Bronson, a conservative mayoral candidate who’d spoken of toughness on who he termed “vagrants” during his campaign, at a dinner party hosted by a surgeon both knew, he said. They spoke again during the Zoom calls with nonprofits serving the homeless.

When Bronson offered him the chance to take on the homeless coordinator role and spearhead the shelter project, Morris and his wife discussed it.

“We just said, yeah, this is a chance to get something super good done.”

Morris said he’s studied what other cities have done and has talked to providers here to formulate the Bronson plan. He and Cece visited the Reno, Nevada, campus of a large mass-shelter similar in size to the one Anchorage is contemplating. (Morris says he wants to offer more services than the Reno shelter.)

“We wanted to see it for ourselves,” he said.

He has also spoken with unhoused people, who he says asked for all services to be held on site, as well as rides to church services and opportunities for work at the facility.

Morris asked to be paid $1 per year to work in the position of homeless coordinator, said Matt Shuckerow, spokesman for Bronson. But once he was hired, it became clear working as an official municipal employee essentially for free would violate minimum wage laws, and the administration is still trying to work out what the lowest salary allowable would be, Shuckerow said.

People critical of the plan say Morris is promising too much and has a simplistic understanding of the nuances of both homelessness and municipal procedure.

Bill Falsey, a former city manager under Mayor Ethan Berkowitz who unsuccessfully ran for mayor this year, said he’s never interacted with Morris but has questioned aspects of the shelter proposal.

“Before you can even engage the question of whether it is a good idea as a policy matter, so many things jumped out to me as practical challenges,” he said. Those include ballooning cost estimates, potential wetlands site involvement and more.

“I’m sure that John Morris is a guy with a lot of goodwill, he wants to do a good thing,” Falsey said. “But I do think there are a lot of practical realities they’re going to have to work through.”

Christopher Constant, an Assembly member representing downtown, said he appreciates “the way the mayor has centered this issue so prominently” and the enthusiasm Morris brings.

But the administration is “promising cheap, fast and good,” said Constant. “We know you can’t have all three.” More work on a “unifying path forward” is needed, he said.

Right now, the job is “emotional,” Morris said. “It’s up and it’s down.” His hope, he said, is that in a year, the shelter on Tudor Road will be a reality and he’ll be attending a groundbreaking ceremony for permanent supportive housing.

A few days later, the Assembly dealt a major setback for the original plan Morris had devised. In a text message, he seemed unfazed.

“This issue is no less important to us, and the Assembly, than it was yesterday,” he said. “So the work will continue.”