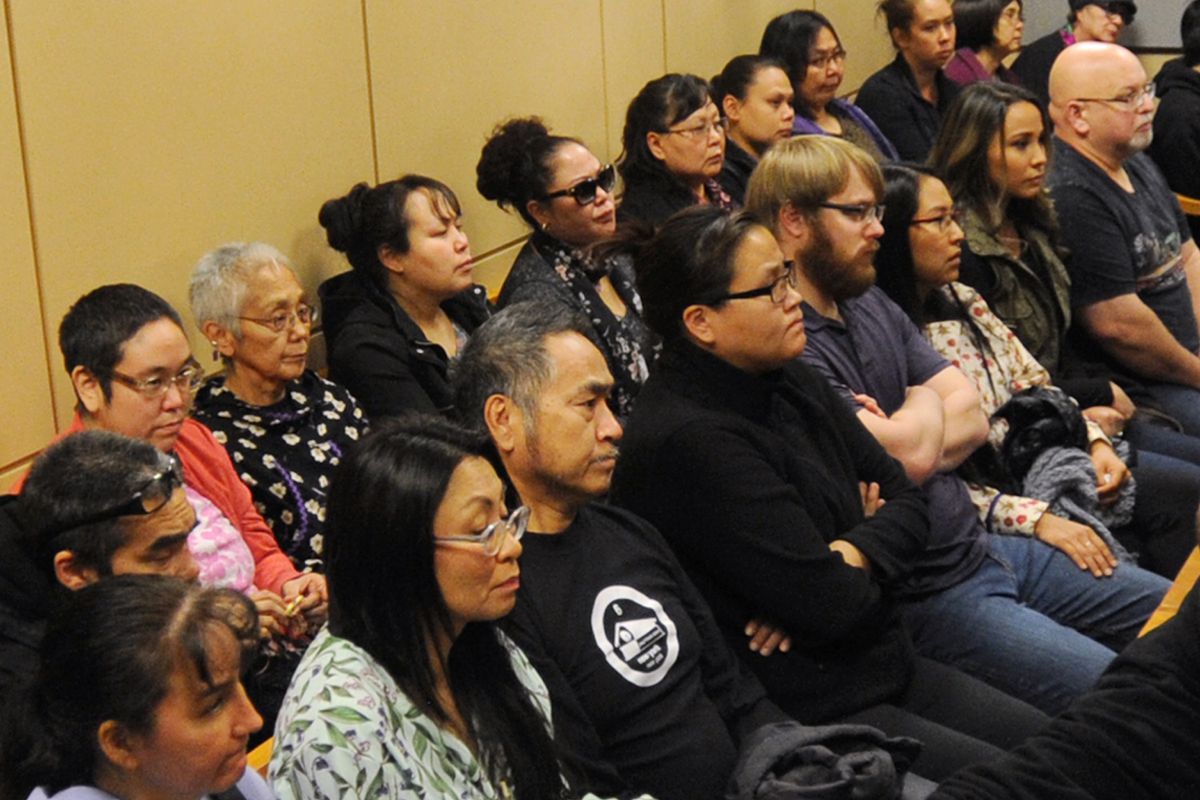 Relatives of Veronica Abouchuk filled the courtroom gallery as they attended the arraignment of Brian Steven Smith on Monday, Oct. 21, 2019, who has been charged with murdering the 52-year-old woman. (Bill Roth / ADN)

Relatives of Veronica Abouchuk filled the courtroom gallery as they attended the arraignment of Brian Steven Smith on Monday, Oct. 21, 2019, who has been charged with murdering the 52-year-old woman. (Bill Roth / ADN)

Family members of Veronica Abouchuk packed an Anchorage courtroom Monday as the man accused of killing her and another Alaska Native woman pleaded not guilty to a second set of murder charges.

Prosecutors announced last week that Smith had also been charged in the death of Abouchuk, an Anchorage woman originally from St. Michael who would have been 52 when she was reported missing earlier this year.

At Monday’s court hearing, Smith entered a plea of not guilty to the new counts, which include homicide, evidence tampering and desecration of a corpse, through his attorney, public defender Dan Lowery.

Smith had previously pleaded not guilty to the murder of Henry, who he is accused of killing in an Anchorage hotel room on Sept. 4.

Police have said a citizen reported finding a digital card containing videos and images of the brutal slaying. Police connected it to Smith because of his distinctive South African accent.

He had apparently been on the radar of police, though officials haven’t said why.

Charging documents say Smith then confessed in an interview with detectives to shooting Abouchuk to death sometime between 2017 and 2018. Police found her remains near the Old Glenn Highway in the Mat-Su Borough in April.

It’s not clear how the two encountered each other. Abouchuk had been reported missing in February. Her family had last seen her in August 2018.

Monday’s hearing was emotional and tearful for more than 20 family members and friends that packed the courtroom. Some stepped out of the courtroom when Smith was led in, handcuffed in an orange jail jumpsuit.

During the hearing, the family asked that Smith’s bail be increased to $1 million through assistant district attorney Sarah Park.

“This has affected them greatly,” Park told the court. “They spent time searching for (Abouchuk) and now that they have some answered they are still left with many questions unanswered — like why did this happen to their family member. This has caused them a lot of pain.”

Also at Monday’s court hearing were activists Joanne Sakar and Natasha Gamache, who wore red handprints across their faces — a symbol to draw attention to the missing and murdered Indigenous women movement, which seeks to draw attention to high rates of violence against American Indian and Alaska Native women and girls, and to put pressure on the criminal justice system to properly investigate and prosecute such cases.

Gamache, a UAA student and mother of six, said she went to the hearing to protest what she sees as the state’s history of not taking crimes against Alaska Native women seriously.

Abouchuk was a much-loved mother, sister and aunt, her family said.

She grew up in St. Michael but had lived in Anchorage for many years, said her niece, Tatauq Muma. She had been homeless around the time she went missing, according to the Anchorage Police Department.

Her family worried about her vulnerability and safety, Muma said.

“We have always wanted the best for her,” she said.

Muma said one of the last times she saw her “Auntie Veronica,” as she called her, Abouchuk was standing on the side of the road in the Fairview neighborhood. She asked her husband to pull over so she could say hello and give her a hug.

Seeing Brian Smith in court, Muma said she believes he may have other victims. She wants to know why he targeted her aunt.

The family said they plan to attend other court hearings as a group.

They have experienced another violent death: One of Abouchuk’s sisters, 35-year-old Martha Toms, was found severely beaten in a park in Mountain View in 2005. She died a short time later. Her killing remains unsolved.