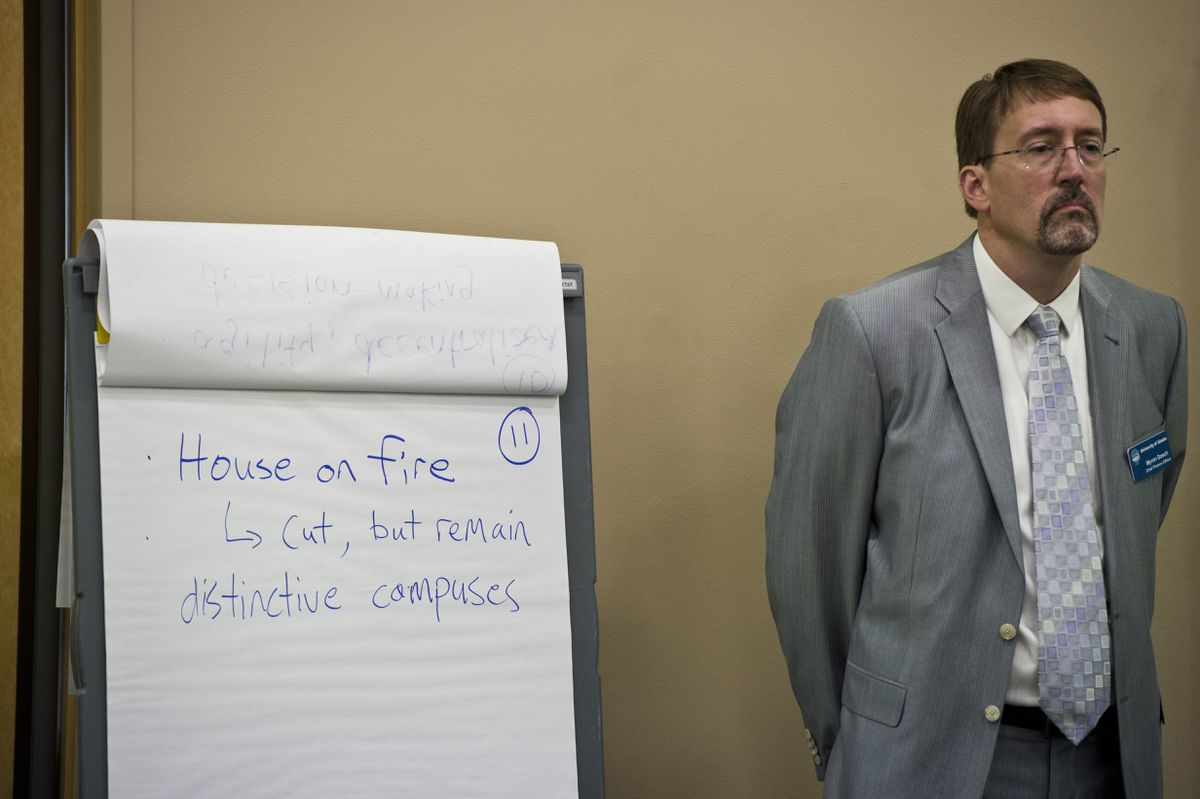 Myron Dosch, chief finance officer for University of Alaska, writes ideas on paper during the UA Board of Regents meeting at UAA Tuesday. (Marc Lester / ADN)

Myron Dosch, chief finance officer for University of Alaska, writes ideas on paper during the UA Board of Regents meeting at UAA Tuesday. (Marc Lester / ADN)

The University of Alaska Board of Regents on Tuesday voted to move toward merging the state’s three separately accredited public universities into one accredited institution with multiple locations.

The regents’ decision to overhaul the current structure of the university system followed more than six hours of at-times tense and emotional discussion about how to deal with a one-year 41% state funding cut in the fiscal year that started July 1.

“In my view, our house is on fire,” UA President Jim Johnsen told regents at Tuesday’s crowded meeting in Anchorage. “It’s also my view that determining what is essential — while it’s extremely difficult — is much simpler in a one university context.”

In an 8-3 vote Tuesday, the regents tasked Johnsen with drafting a plan to consolidate UA into one accredited university with multiple campuses. The regents are expected to vote on that plan in September.

“It’s critically important to emphasize multiple locations," Johnsen told regents during his presentation of the single-accreditation model, which he supports.

"This would not be in Anchorage, in Fairbanks, in Southeast or in Talkeetna, it would be in all of those places, that would be the idea,” he said. “You’d use technology and people to provide academic programs and other services based on enrollments and based on where those people are, where the demand actually is.”

Johnsen said similar models are used by the University of Washington and the Kent State University system in Ohio.

Regents didn’t discuss a timeline for when a transition could take place at UA and many questions remain about what the model would mean for different academic programs.

“This is not the end of the road, this is the beginning of a discussion,” said John Davies, Board of Regents chairman.

UA leaders have said budget cuts will not impact students’ fall classes that start next month. There will also be a “teach-out plan” for all students to complete their programs, they said.

Under single accreditation, Johnsen said, he expected reduced administration and a larger chunk of the budget to go toward academics and student services. Restructuring would also include moving from multiple colleges in certain fields, such as engineering, to a single college, he said.

This is what a single-accreditation model could mean for the colleges of engineering, according UA President's presentation. pic.twitter.com/uOuya8Dxpm

“While this challenge is something that nobody wanted here, it is, I think, an opportunity to rethink how we organize the university,” Johnsen told regents.

In the state operating budget approved this year, the Legislature had instructed regents to consider a plan to transition to single accreditation, prompting the creation of a task force.

The motion approved by regents Tuesday included three other directives for Johnsen, aside from planning for single accreditation.

• Reduce administrative costs immediately by consolidating and standardizing the “back-office functional areas” including IT, finance, university relations and procurement.

• Prepare a strategic approach to combining “duplicative academic colleges and schools,” consolidating research institutes and enhancing the integration of community campuses for review and approval by the regents at their September meeting.

• Consult through the above steps with students, faculty and staff.

Garrett, the student regent, said people are not ready for a single University of Alaska.

“The students and the faculty and staff don’t want it,” she said.

Alex Jorgensen, a student representative, told regents that UAA, UAF and UAS each have distinct identities, and students have “very grave concerns” about moving to a single accreditation in such a rapid way.

Parker proposed UA officials work on cutting the budget under the consortium model, but her motion was ultimately tabled.

Parker said it didn’t seem feasible to move to a single accreditation in one year without putting all of the universities’ accreditations at risk.

Johnsen said keeping accreditation is a top priority and UA will work closely with its accrediting agency through the process.

Complicating the discussion on Tuesday: UA still faces some uncertainty about whether its state funding level could change this year.

There’s no way to know for sure, Davies said, “and that’s part of our problem.”

What’s in law now: a $135 million cut in state funding for UA compared to last year.

That follows Dunleavy’s decision to veto $444 million from the state operating budget on June 28 for the fiscal year that started three days later. He slashed $130 million for the university system. The Legislature had previously approved a $5 million cut for UA.

But on Monday, a majority of Alaska legislators approved a bill that would reverse most of Dunleavy’s vetoes, including restoring $110 million in state money to UA this year, leaving the university system with a $25 million cut.

The bill now goes to Dunleavy for approval or veto. He has not indicated whether he would approve the restored funding to UA.

Dunleavy has said he’s working with UA on a “step-down approach.”

His administration has brought forward a controversial, two-year funding proposal for UA. The proposal suggests UA cut its budget by a similar amount but over two years — $95 million in the current fiscal year and a $38 million cut next year — and in specific areas such as research.

Some raised concerns about the governor attempting to usurp the constitutional authority of the regents by prescribing cuts, though the governor’s office argues that’s not the case.

Mike Barnhill, policy director for the state Office of Management and Budget, told regents at Tuesday’s meeting that the proposal is not a “dictate” or take-it-or-leave-it offer, as some have characterized it.

It was “offered in the spirit of compromise,” he said.

Dunleavy also called into Tuesday’s meeting and spoke for about six minutes.

He told regents that he hoped they accepted his administration’s proposal, “and we get working together sooner rather than later.”

Dunleavy is a graduate of UA, he’s worked for UA and he has two daughters who take courses at UA, he told regents.

UA has benefited from state funding over the years, sometimes increased funding “at pretty good levels," Dunleavy said. But he said Alaska has a “fiscal problem" necessitating spending cuts. He also told regents that UA needs to improve its outcomes.

Dunleavy said his office “has been and will be fully prepared” to work with UA on an approach that “can get the university focused in a direction that lowers its overhead and increases its outcomes."

Regents didn’t vote on Dunleavy’s proposal Tuesday. Some expressed concerns about the targeted cuts, including to research.

Davies said UA will continue to talk with the governor’s office.

After Tuesday’s meeting, Johnsen said, he will now work with university leaders on how to consolidate administrative services and colleges, and to build a plan for single accreditation.

Johnsen said there will be meetings with faculty, staff, students and community members in August to discuss UA’s restructuring.

The regents’ meeting Tuesday follows their decision last week to declare “financial exigency,” allowing them to more quickly cut costs in the face of a financial crisis.

The week before that, bonding and borrowing money became more difficult and expensive for UA after Moody’s Investors Service downgraded its rating by multiple notches due to “the severity and magnitude” of its financial challenge.

The regents’ next full board meeting is scheduled for Sept. 12-13 in Juneau.