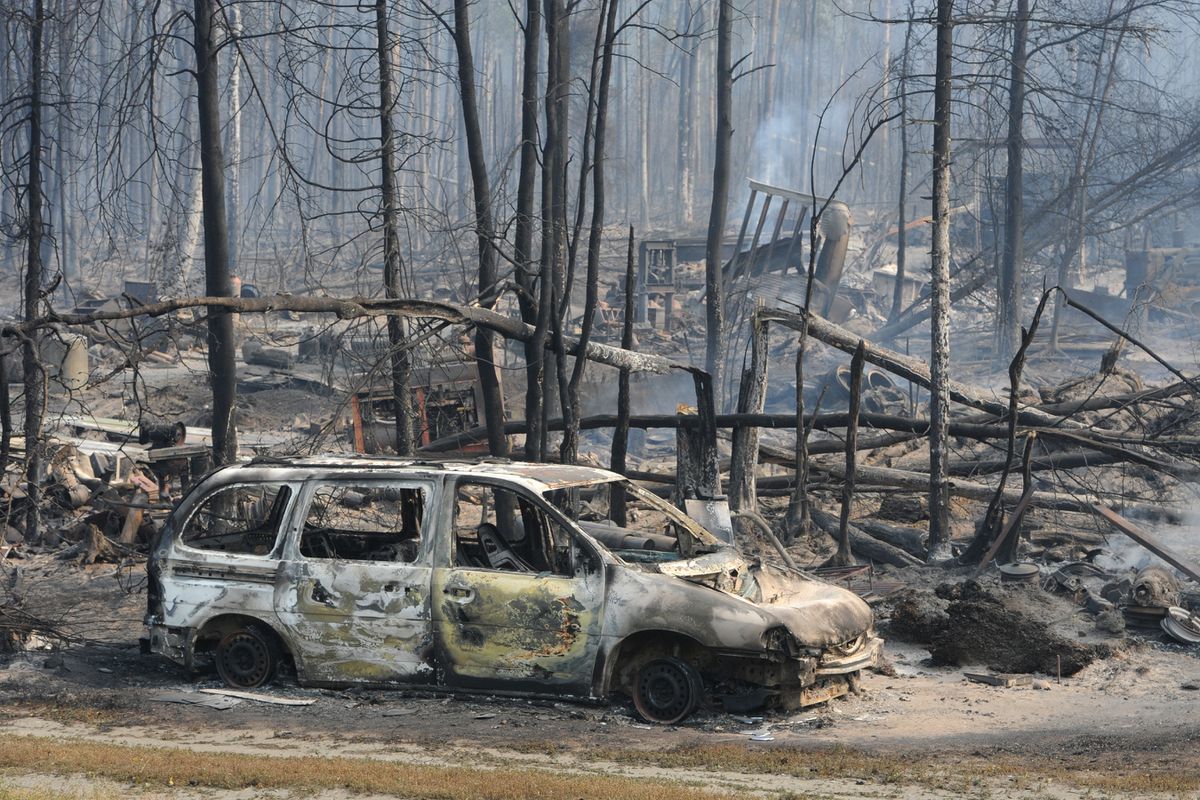 Smoke rises from vehicles and structures at Mile 86 of the Parks Highway on Monday, Aug. 19, 2019, that were damaged during the fast moving McKinley fire near Caswell. (Bill Roth / ADN)

Smoke rises from vehicles and structures at Mile 86 of the Parks Highway on Monday, Aug. 19, 2019, that were damaged during the fast moving McKinley fire near Caswell. (Bill Roth / ADN)

WILLOW — Authorities say the recovery process for those who have evacuated from neighborhoods near a destructive Susitna Valley wildfire will begin on Tuesday.

By Monday evening, the McKinley fire burning north of Willow had consumed about 3,000 acres of boreal forest and destroyed at least 50 structures, fire managers estimate.

Evacuees would not be allowed back to their properties for at least 24 hours, meaning Tuesday at the earliest, said Kale Casey, a spokesman for the incident management team that’s manning the firefighting effort, said in a video update Monday evening.

The forestry division is working with the Alaska State Fire Marshal’s Office and Red Cross to confirm the number of structures lost. Fire managers have estimated the number at around 50, but haven’t been able to say which structures were affected.

“We’re anticipating it’s probably higher than that,” said Tim Mowry, a spokesman for the Alaska Division of Forestry.

More concrete information about the damage will be available after emergency managers go in to survey the area on Tuesday, Casey said.

“We’re going to have the Mat-Su Borough emergency management folks who do structure assessment get into the fire area tomorrow," Casey said. "Right now actively there are helicopters and air tankers working to cool off around the houses we can still protect.”

“If you have questions about the McKinley or Deshka Fires, or are asking about the status of your structure, please call the Mat-Su Area Forestry Information Hotline at 907-761-6233,” the Alaska Division of Forestry said in an update.

The fire was burning on both sides of the Parks Highway between miles 82 and 91 after intense winds fueled its rapid spread over the weekend. Those winds have since died down — a “huge” factor in battling the blaze, a spokesman for the Alaska Division of Forestry said Monday.

“The fact that the winds have calmed down is going to be a great help,” said spokesman Tim Mowry. “There’s still a huge amount of work to do, but having the winds subside is going to make a huge difference.”

An additional 10 crews — about 200 people all together — were en route Monday to assist in the firefighting effort, Mowry said.

“We’re trying to do what we can with what we’ve got until reinforcements arrive," he said.

The fire started Saturday when wind blew a tree onto a power line near Mile 91 of the Parks Highway, and powerful weekend winds stoked the blaze.

One lane of the Parks Highway was opened with pilot cars Monday morning between Mile 71 and Mile 99, authorities said. But there was still heavy traffic and long delays, and the road could be closed again at any time, said Alaska Department of Transportation spokeswoman Danielle Tessen.

State agencies urged people to avoid using the highway in the area. Pilot cars were leading 50 vehicles at a time along the 28-mile stretch from Willow-Fishhook Road north to the Montana Lake area, and it was taking 50 cars about an hour to get through, Tessen said Monday morning.

Casey warned that drivers being escorted by pilot car are not allowed to divert to check on structures.

“It’s too hot in there, it’s too dangerous, so we ask for your patience,” he said.

Meanwhile, authorities are trying to get a handle on who is safe and accounted for. Mowry said Monday evening he didn’t know of any injuries reported.

Megan Peters, a spokeswoman for the Alaska State Troopers, and Chief Michelle Weston of the Girdwood Fire Department, which is assisting in the firefighting effort, said Monday they didn’t have an estimate for the number of people who have evacuated. About 138 people stayed in emergency shelters north and south of the Parks Highway closure zone over the weekend, according to Cari Dighton, a spokeswoman for the American Red Cross of Alaska.

Eric Wedermyer evacuated his home in Caswell Saturday, but returned later when he heard the danger had passed. Wedermyer, with his wife and two kids, were forced to evacuated again on Sunday, this time barely making it out Caswell.

“The fire was three-quarters of a mile from our property,” Wedermyer said when the family left on Sunday. Smoke was so thick in either direction, that a flagger had told the family it was best to head south. Wedermyer said he could see fire along the highway Sunday as the family raced toward Willow.

“That way, if a family member calls, we can say, yes, this person reported in at this time,” Casey said.

The McKinley Fire was one of several fires in Southcentral Alaska this weekend amid dry weather and windy conditions. West of the Parks Highway, the Deshka Landing fire threatened cabins on Red Shirt Lake. That fire was about 1,800 acres as of early Monday, said See.

The smaller North Fork fire, estimated to be between 25 and 30 acres, prompted a level one “ready” evacuation notice in neighborhoods north of Homer.

The months-old Swan Lake fire on the Kenai Peninsula spread rapidly again on Saturday, prompting an evacuation notice and closing part of the Sterling Highway. In Anchorage, officials warned of extreme fire danger.

McGee and Zak reported from Anchorage and Parrot from Willow.