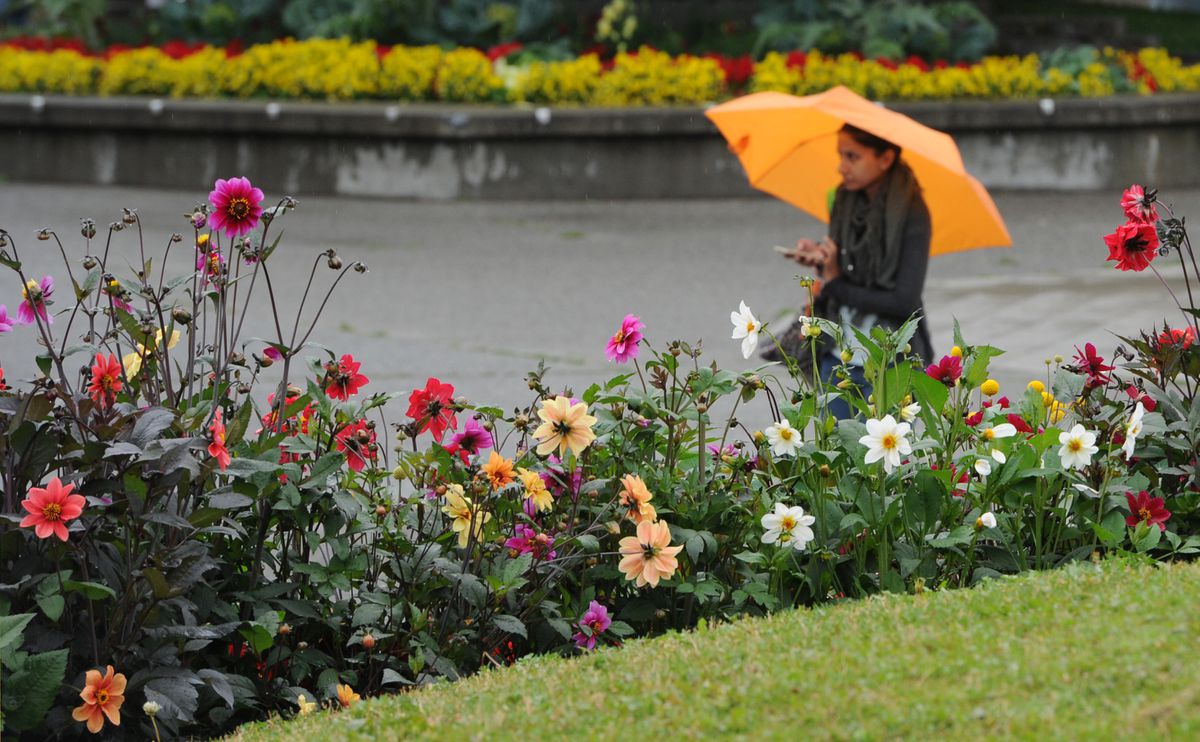 A pedestrian walks through Town Square Park in Anchorage with an umbrella on Sunday, July 14, 2019. The National Weather Service forecast office in Anchorage received more rain that day than in the entire month of June. (Bill Roth / ADN)

A pedestrian walks through Town Square Park in Anchorage with an umbrella on Sunday, July 14, 2019. The National Weather Service forecast office in Anchorage received more rain that day than in the entire month of June. (Bill Roth / ADN)

From seared and parched to deluged, it’s one weather extreme or another in Alaska.

In July, the state saw record heat, scant rainfall and raging wildfires. Now, an atmospheric river, a fire hose of moisture originating from the tropical Pacific Ocean, is soaking large parts of the state.

More than 4 inches of rain fell in a single day late last week in some areas of the Seward Peninsula in Western Alaska, equivalent to more than a month’s worth of precipitation, causing flooding and establishing new rainfall records.

Nome registered 2.47 inches of rain Friday, beating its previous 24-hour rainfall total of 2.38 inches set in 1956. It also marked Nome’s first day with more than 2 inches of rain since 1957.

From 10pm Thursday to 8pm Friday, Nome received 2.43 inches of rain, breaking the all-time record for most precipitation in 24 hours, last set in 1956. @AlaskaWx https://t.co/IY4U0UlTfI

In Elim, 100 miles east of Nome, 3.28 inches came down. That also appears to have set an record for 24-hour rainfall. Elim hit 58 degrees Friday at the same time, setting a record high temperature for the date.

Northeast of Elim, Hogatza River saw a whopping 4.82 inches. It’s all in character for atmospheric rivers, which can slingshot uncharacteristic warmth and humidity all the way up to the Arctic Circle.

"The rain mostly came in two shots, with a 16-hour break" said Rick Thoman, an Alaska climate specialist at the International Arctic Research Center. "The atmosphere had an extremely high moisture content. There was even flooding on the Dalton highway."

Most impacted was the stretch of road between the Yukon River and the Brooks Range.

With this recent heavy rain event, flooding isn't limited to coastal areas. Here are some photos taken along the Dalton Highway (Jim River, Milepost 142) at 2:30pm this afternoon. If you come across flooded roads remember to Turn Around, Don't Drown!

Since Friday, Denali National Park has picked up more than 5 inches of rain, with a number of spots in the area eclipsing 4 inches in 24 hours.

"It's as high as anything I can remember in Denali," said Jim Brader, lead forecaster at the National Weather Service office in Fairbanks. "We saw as high as 6.7 inches within four days in Denali. Meanwhile, we're expecting another inch of rain by Tuesday."

Average July or August rainfall tends to be closer to 2.8 inches.

The rain has been welcome in some areas after a lengthy period of hot and dry conditions.

"The soil has had a lot of capacity to hold more water," said Thoman. More than two-thirds of the Last Frontier is listed as being in drought, while roughly a quarter is in "moderate drought" or worse. "There are some big fires in the northeast right now. The rain is sort of right in time," Thoman said.

"We've had hundreds of wildfires burning," said Brader. It's been a feast-or-famine sort of atmosphere this season in Alaska. And lately, the scales have been tipping toward a "feast."

Atmospheric rivers are rare but not unheard of in Alaska. But this summer has brewed the perfect recipe for a top-tier rainfall event.

"For the past week, we've had a blocking ridge of high pressure," explained Brader. Highs spin clockwise, ushering in southwesterly flow on their departing side. "This time of year, we tend to get a lot of southwesterly flow as the high moves east over Canada and the northwestern Lower 48."

But Brader says that the high-pressure dome has been extra strong this year. "It's been a much hotter air mass."

Water temperatures have been unusually warm as well - in some cases extreme compared with typical temperatures. “That can add even more humidity to the air,” Brader said. “Of course, most of the moisture is coming from the tropical connection.” Thoman, meanwhile, cites the impressive lack of ice on the Bering and Chukchi seas as a contributor in allowing more moisture flux from the ocean.

All this comes on the heels of notable coastal flooding Friday. Nome was under a coastal flood warning for sea levels 6 to 8 feet above the normal high tide, while flooding was also reported in Kotzebue.

Kotzebue is also experiencing coastal flooding today. Here are some pictures sent in from NW Arctic Borough Emergency Manager Dickie Moto. As water levels begin to recede, please be safe and exercise caution in and around flooded areas. #akwx pic.twitter.com/wW0EHf4gT2