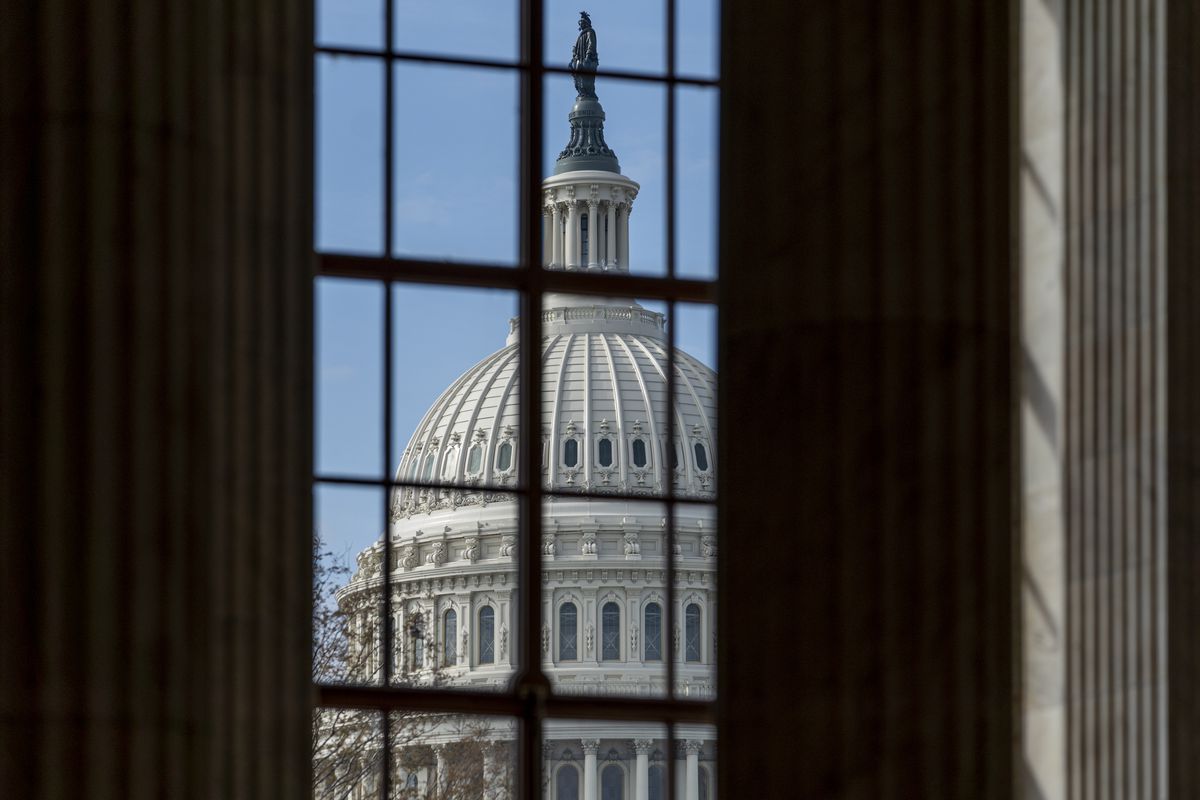 The Capitol is framed through a window in the Russell Senate Office Building as lawmakers negotiated on the emergency coronavirus response legislation, at the Capitol in Washington, Wednesday, March 18, 2020. (AP Photo/J. Scott Applewhite)

The Capitol is framed through a window in the Russell Senate Office Building as lawmakers negotiated on the emergency coronavirus response legislation, at the Capitol in Washington, Wednesday, March 18, 2020. (AP Photo/J. Scott Applewhite)

The bill includes $310 billion to replenish the Paycheck Protection Program and another $60 billion to shore up the Economic Injury Disaster Loan and grant program.

The loan programs were funded in the massive $2.2 trillion COVID relief package passed last month, but ran out of money last week.

[State and federal aid is starting to arrive for some Alaskans, but not all]

The implementation of the programs in Alaska has been “less than stellar," and the delegation is pushing to improve their performance, U.S. Sen. Dan Sullivan said during a teleconference with reporters.

Sullivan said the delegation hasn’t gotten a satisfactory explanation for why only one disaster loan, for $500,000, had been approved in Alaska so far. That’s well behind nearly all other states, according to a Small Business Administration report released Tuesday.

Nationally, the agency has approved nearly 27,000 disaster loans totaling $5.6 billion as of Monday. Just over 1,600 applications in Alaska have been processed to receive the grant of up to $10,000 that is linked to the disaster loan. Those so-called rapid loan advances amounted to $7.3 million in Alaska, the agency said.

Nearly all the Alaska applications processed for the grant would have also applied for a loan, said Kevin Wynne, an SBA official. The agency’s next report on the program should show an increase in loans to Alaskans, he said. He said he did not know when that will be released.

The additional funding is desperately needed, said U.S. Sen. Lisa Murkowski. More than 22 million Americans have filed for jobless benefits in recent weeks, including more than 60,000 people in Alaska, or about 18% of the state’s workforce.

“The economic impact we are seeing in this state is extraordinary,” Murkowski said. “We have just begun to assess the need of the relief that is going to be required. (The relief has been) designed to bring stabilization, and we’re not stable yet.”

Much of the payroll loan can be forgiven if employers properly cover employee wages and other basic needs. The payroll program was originally seeded with $350 billion.

The replenishment for the payroll program includes a special $60 billion set-aside for small and medium-sized banks that deliver the loans, Murkowski said.

Murkowski said the provision came in response to a concern she had that small, local lenders in Alaska could face difficulty delivering the loans compared to larger, sophisticated lenders that operate nationally.

In less than two weeks, the payroll program approved more than $900 million in Alaska for more than 4,800 loans.

“A pretty good chunk of money went into the state of Alaska” under the payroll program, U.S. Rep. Don Young said.

The delegation is trying to resolve issues with the program, including making sure hard-hit tourism businesses suffering from a lack of cruise ships this summer will have access to funds when they need it most, Sullivan said.

The new bill also provides $75 billion to support health care providers and hospitals during the crisis. Another $25 billion will provide money to expand testing for the virus, with much of that for states and local governments, and $750 million for tribes and tribal health groups.

The delegation is working to ensure the expanded testing is provided in Alaska, to help make sure commercial fishing this summer can be safely carried out, Murkowski said.

The new bill is expected to pass in the House on Thursday. If it receives approval, the bill will become the fourth relief measure Congress has passed to address the crisis.