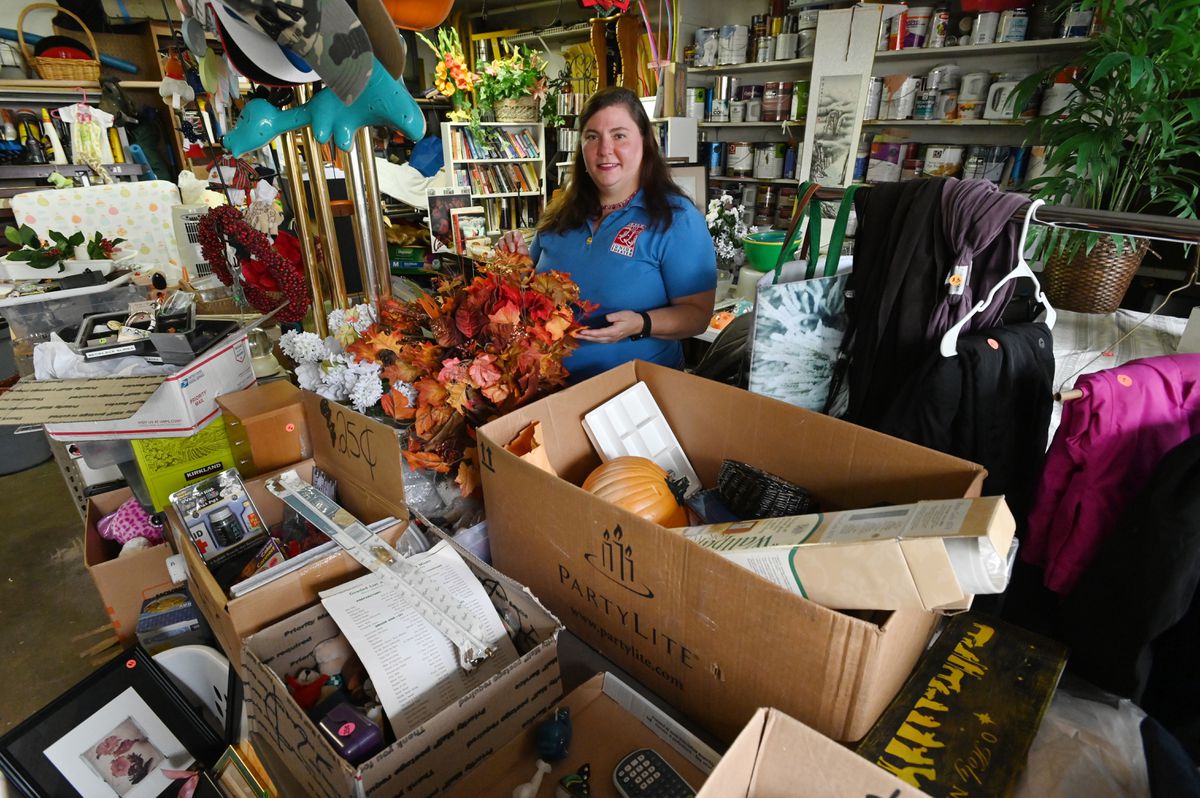 Alaska Junior Theater executive director Lainie Dreas has her garage and four tents on the driveway packed full of donated items on Wednesday, July 22, 2020. She was holding a garage sale to raise money after running out of PPP loan money. (Bill Roth / ADN)

Alaska Junior Theater executive director Lainie Dreas has her garage and four tents on the driveway packed full of donated items on Wednesday, July 22, 2020. She was holding a garage sale to raise money after running out of PPP loan money. (Bill Roth / ADN)

Lainie Dreas, head of Alaska Junior Theater, was forced to lay off her two employees in late June when a $28,000 federal loan the group received to help combat pandemic-related losses dried up after two months.

“The PPP was amazing for what it was able to do, but it didn’t go on long enough because the crisis isn’t going on for two months,” she said. “It looks like it could go on for a long time.”

The nonprofit brings live performances to student audiences, typically. But events have been canceled since March amid government restrictions on large gatherings, eliminating most of the group’s income.

Now, Dreas is holding weekend garage sales in her yard in Midtown Anchorage, selling donated items to keep the group afloat for months longer until shows can resume — “part of our staying-alive plan,” she said. So far, they’ve raised about $3,500.

As Congress considers another round of COVID-19 relief funding, Alaska companies that have exhausted their federal loan under the Paycheck Protection Program say more support is needed to keep the economy from falling off a cliff.

Thousands of Alaska businesses that received the forgivable loan in April and May, the program’s first two months, have likely already spent their loan or are close to running out, said Nolan Klouda, head of the University of Alaska Center for Economic Development.

The loan, a central part of the federal government’s business rescue package, was initially focused on covering two months of payroll plus other needs. In June, Congress extended the timeline to nearly six months as the pandemic dragged on, but that was too late for some businesses, he said.

Alaska’s all-Republican congressional delegation is weighing measures that would extend aid as the federal money approved in March and April begins to run dry. The path Congress will take is uncertain as it considers competing packages from the House Democrats and Senate Republicans.

Dreas said Congress should expand the payroll loan program to support businesses and employees with a second round.

She’s worried about the workers she had to cut. They’re struggling to pay rent and meet other needs.

“It has been just awful,” she said. “It’s not like it’s an easy time to find jobs now. Without the PPP, more people will be flooded into the unemployment market and there’s just not that many jobs out there.”

Senate Republicans on Monday released a $1 trillion proposal, with benefits that include providing an extra $190 billion to the Paycheck Protection Program to support businesses that now need a second loan. More than $100 billion remains in the program from an early injection of funding.

An action like that is an absolute necessity to protect businesses and workers, said Jon Bittner with the Alaska Small Business Development Center.

“It’s tough to go into a bank and convince them financial projections will look good for the next six months,” he said.

The aid packages currently being negotiated on in Congress, including the $3 trillion HEROES Act passed by House Democrats in May, would also continue the low-interest Economic Injury Disaster Loan that has supported small businesses in Alaska with about $400 million.

But the PPP has been larger, pumping $1.3 billion into the state’s economy, and helping more than 11,000 Alaska businesses. The PPP is also important because it’s focused on keeping workers employed and doesn’t need to be paid back if spent properly, Bittner said.

U.S. Sen. Lisa Murkowski said Tuesday that she has co-sponsored a bill to launch a new, forgivable loan program targeting the hardest-hit small businesses through the end of the year. The act is called Reviving the Economy Sustainably Towards a Recovery in 2020, or RESTART.

Murkowski said in a statement that the Paycheck Protection Program has worked well for many Alaska businesses. But it’s often been less effective for the smallest businesses that need it most. Also, the PPP time limits could leave many businesses short of money in the coming months, she said.

The measure is designed to build off the original PPP, and is independent of other proposals involving the program, Murkowski’s office said in a statement.

Tourism across Alaska has plunged this summer, and sales are a fraction of what they were last year, he said.

The loan has helped the company stay open and keep about 10 people employed, well below the 25 workers he needed a year ago.

“There’s no risk to their jobs as long as there’s people who come on our tours,” Stiassny said.

Congress “should do another small-business loan program, but scaled down significantly in terms of the size of small businesses that are eligible,” he said.

A second loan will help tourism businesses like his survive as cash flow comes to a halt during the offseason. It will help keep year-round staff working, he said.

Already, about 60,000 people are collecting unemployment checks in Alaska after the pandemic led to restrictions on businesses and shopping starting in March, according to the Alaska Department of Labor and Workforce Development.

Unemployment the last three months has reached the highest levels on record, including 12.4% most recently in June.

Businesses need another round of support, said Richard Teders, a co-owner of Color Art Printing in Anchorage.

The PPP provided about $165,000 for his business, helping pay rent and keep his staff of about a dozen workers on board during the toughest stretch and into mid-June.

Business is down about 25% from last year, he said.

But increased demand for signs for businesses to advertise they are reopening and notify customers about social-distancing restrictions has helped.

The loan has run out, but he’s still able to give his workers nearly full-time work.

“I don’t know if we’re one of the lucky ones, that we got the money early,” he said. “But of course, once it ends, you’re back in same boat and hoping work just keeps coming in the door.”

He’d get right back in line to take a second wave of PPP money to support his employees, if that’s possible, he said.

“There’s part of me that’d rather not do that, because I’m the type who likes to put on my ‘big boy pants’ and go to work no matter what,” he said. “But our people have rent and mortgage payments and bills coming in. The last thing we want to do is send someone to the unemployment line.”