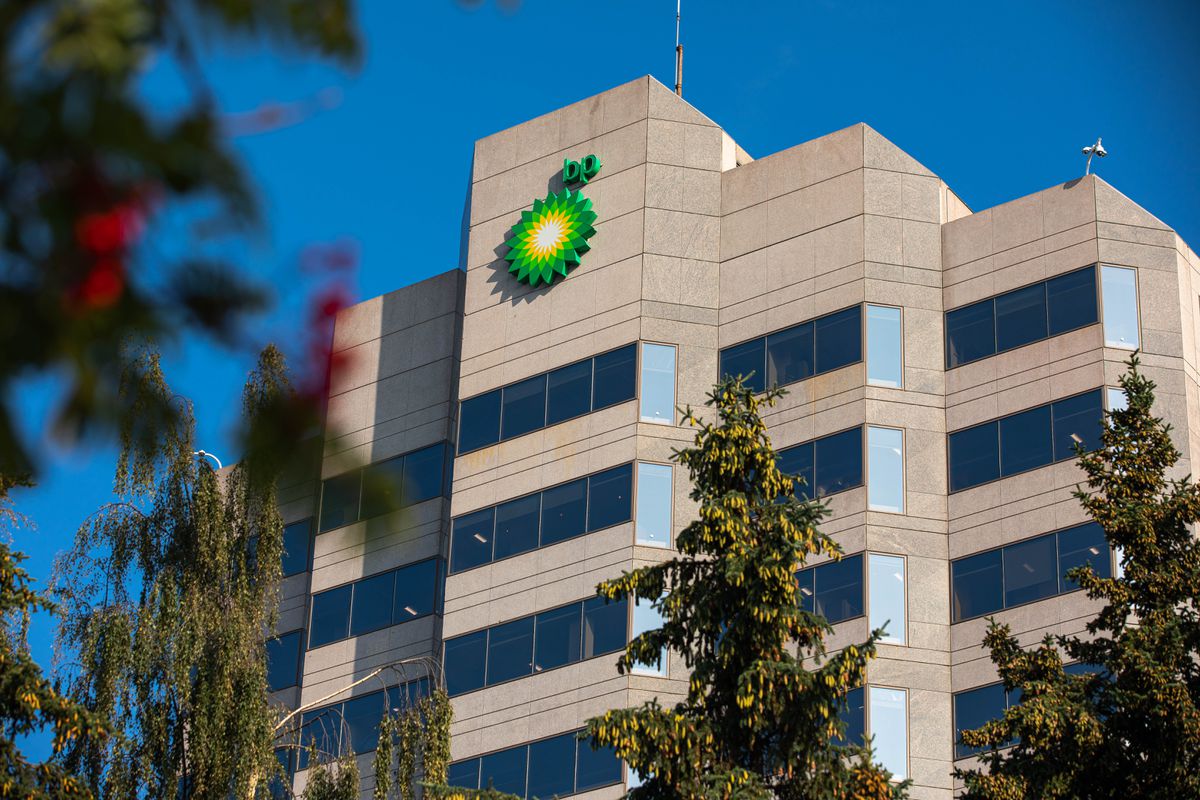 The BP building in Midtown Anchorage on Aug. 27, 2019. BP plans to sell all of its Alaska assets to Hilcorp Alaska for $5.6 billion. (Loren Holmes / ADN)

The BP building in Midtown Anchorage on Aug. 27, 2019. BP plans to sell all of its Alaska assets to Hilcorp Alaska for $5.6 billion. (Loren Holmes / ADN)

The Federal Trade Commission has no antitrust concerns with BP’s sale of its Alaska assets to Hilcorp and will let the $5.6 billion deal advance, a state official told lawmakers in a letter Tuesday.

After reviewing the deal, the FTC “identified no (antitrust or anti-competitive) issues and will not prevent the parties from closing the transaction," Corri Feige, commissioner of the state Department of Natural Resources, wrote in a Nov. 12 communication to members of the House and Senate Resources committees.

The state Department of Law is also reviewing the sale for potential anti-competitive issues, Feige said in the three-page letter.

In the letter, Feige also described how several other state agencies will scrutinize the proposed deal, in addition to an unidentified “highly respected economic consulting firm" that will help examine whether Hilcorp has the financial muscle to meet its obligations to the state.

The sale, announced in August, is considered the largest on the North Slope in a generation. It affects 1,600 BP employees and would make Hilcorp the state’s second-largest oil producer, after ConocoPhillips.

[As BP exits Alaska, 1,600 employees are waiting to find out what’s next]

Feige’s letter does not describe how the FTC came to its decision. The request for FTC review was filed in September, BP said.

Betsy Lordan, an FTC spokeswoman, said Wednesday that the agency does not publicly describe its position when there are no antitrust issues involved.

Feige’s letter highlighted differences between the ongoing deal and a blockbuster transaction on the North Slope in 2000.

Then, the FTC challenged BP Amoco’s efforts to acquire ARCO Alaska’s assets amid concerns that BP would hold too large a stake in Alaska, including 70% of the trans-Alaska pipeline. In the end, Phillips Petroleum — now ConocoPhillips — bought the assets for $6.5 billion.

If the deal goes through, Hilcorp would hold a 48% stake in the trans-Alaska oil pipeline and in operator Alyeska Pipeline Service Co., more than ConocoPhillips and ExxonMobil. It would hold a 26% stake in the giant Prudhoe Bay oil field, less than those two oil companies.

BP has said that after approval from regulators, it plans to close the deal sometime in 2020.

Feige’s letter came in response to questions from lawmakers about the state’s oversight role, said Dan Saddler, a DNR spokesman.

Feige’s letter described DNR’s ongoing role in overseeing the deal. “The sale documents and their specific terms” are considered confidential under Alaska law, she wrote.

As described in the letter, the agency’s efforts include:

• Contracting with a “highly respected economic consulting firm to rigorously examine Hilcorp’s ability to fulfill its obligations to the state under a set of stressful scenarios.” Saddler said the state is negotiating contract terms with consultants, and declined to name them.

• Examining “existing financial assurances structure to determine what amendments will be required to properly manage the change in the state’s risk profile due to the sale.”

• Examining the deal to understand both companies’ future obligations to the state.

The letter listed five state agencies, in addition to DNR and Law, that must review portions of the transaction.

The Regulatory Commission of Alaska is reviewing the proposed pipeline transfer.

Some Alaskans have expressed concern that the RCA is the only agency required to solicit public comments. The RCA’s comment period is set to end Friday, though many people are asking for more time. Hilcorp has asked the RCA to keep recent years’ financial records confidential, leading to questions from some about the company’s ability to handle a major accident.

Hilcorp, privately owned and based in Houston, Texas, began working in Alaska eight years ago. It revived oil and gas production in the small Cook Inlet basin, and took stakes in some North Slope fields in 2014.

Lincoln, an independent representative from Kotzebue, said Wednesday that he hopes to hold two informational hearings about the transaction before the Legislature. One goal is gathering details about the regulatory process from the Dunleavy administration.

“I would expect there to be public comment during one of those,” Lincoln said.

He aims to hold one hearing before the Legislature convenes in January.

Coghill, a Republican senator from North Pole, said he’s working with Lincoln and others to help organize the legislative hearings. No dates have been set yet.

The Legislature isn’t required to approve or reject the deal, but it has an important role in getting answers and providing information, Coghill said.

He believes the sale is good for Alaska. But the Legislature needs assurances that Hilcorp is financially able to handle BP’s role and respond to any potential problems, he said.

“I expect Hilcorp would be a good partner," Coghill said. “But they are stepping into a whole new category, and as Alaskans, we want to be assured of their ability to properly jump into that role, and that this will be good for us.”