President Biden is swiftly reining in oil drilling to protect the climate. Will the transition leave Alaska’s economy behind? 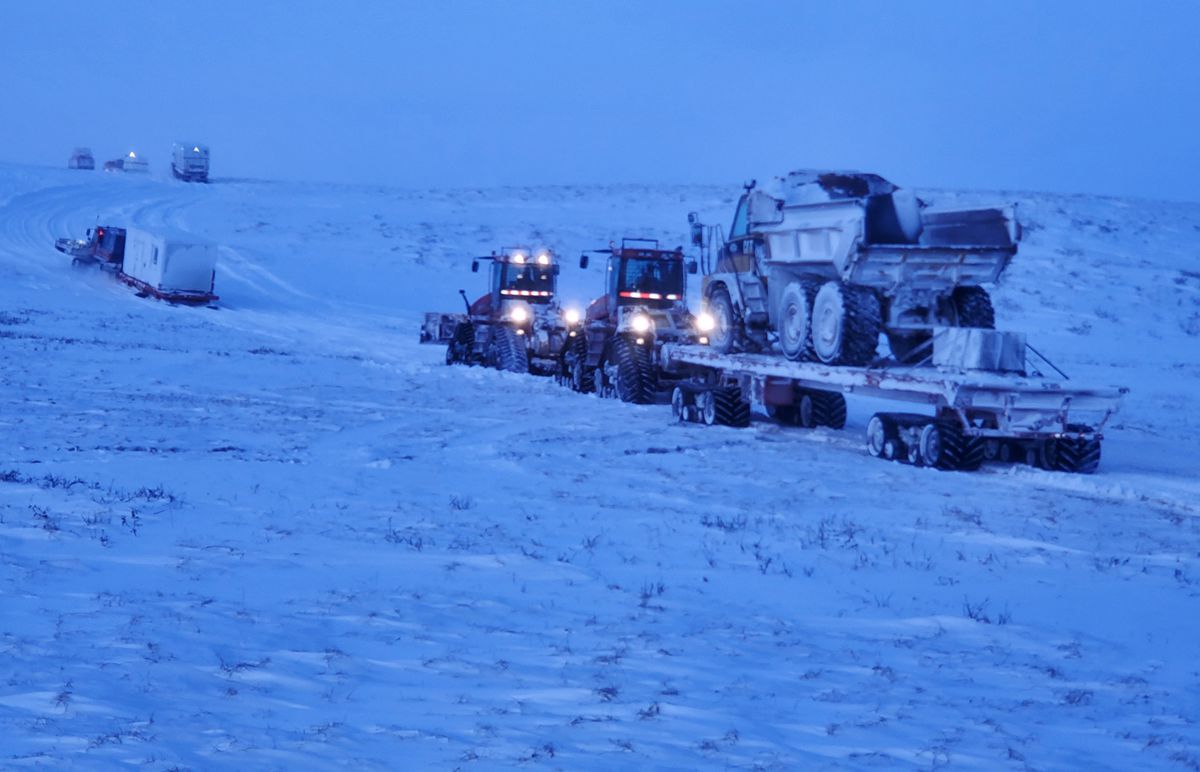 A convoy of Cruz Construction vehicles approach a small hill near mile 27 of the company's 98-mile snow trail to the Merlin-1 drill site on Jan. 18, 2021. 88 Energy has contracted with Cruz Construction to support a winter exploration program in the National Petroleum Reserve-Alaska as part of their Peregrine Project. The project has been on hold since Jan. 21. (Photo by Patrick Corey/Cruz Construction Inc.)

A convoy of Cruz Construction vehicles approach a small hill near mile 27 of the company's 98-mile snow trail to the Merlin-1 drill site on Jan. 18, 2021. 88 Energy has contracted with Cruz Construction to support a winter exploration program in the National Petroleum Reserve-Alaska as part of their Peregrine Project. The project has been on hold since Jan. 21. (Photo by Patrick Corey/Cruz Construction Inc.)

President Joe Biden moved swiftly in his first days in office to suspend oil and gas drilling on federal lands, stirring concerns among Alaska leaders and drillers that key projects may be halted.

The new Democratic president’s actions haven’t yet appeared to cause long-term disruptions in Alaska, though an oil exploration project was delayed for more than a week.

While many Alaskans expect the state’s existing oil fields to keep pumping oil, they say Biden’s plans to retool the national economy to deal with climate change could have an outsized impact on Alaska and its heavy reliance on oil production.

Near-term, Biden’s policies won’t have much effect, including on ConocoPhillips’ large Willow project that has its permits needed for this winter’s work, said Andy Mack, a former Alaska Department of Natural Resources commissioner and acting chief executive of Kuukpik Corp., an Alaska Native village corporation that provides oil field services.

“The bigger question for (ConocoPhillips) is what happens in the coming years,” Mack said. “That’s an important question for Alaskans to focus on.”

“The federal government is declaring a war on Alaska,” said Armstrong. “Every Alaskan should be super nervous about this.”

Others say Biden’s actions can help Alaska transform its economy away from oil and gas to one more aligned with global trends focused on reducing greenhouse gas emissions.

[As Biden vows monumental action on climate change, a fight with the fossil fuel industry has only begun]

Deborah Williams, the Interior Department’s former top official in Alaska under President Bill Clinton, said Biden’s climate policies should be used to help Alaska transition away “from a dying industry – oil and gas – to the economies of the future.”

Alaska can have a leadership role in the new administration’s plans, including helping protect at least 30 percent of federal lands and oceans by 2030, capping methane leaks in wells and advancing innovative renewable energy projects, especially in rural areas with soaring power costs, she said.

“To be competitive, Alaska needs to start now, use its smarts and capitalize on the opportunities associated with a clean, low-carbon future,” Williams said in an email.

In his first week:

• His Interior Department required that approval for drilling and other oil and gas activity be made by department leaders, not agencies within the department, for 60 days.

• Biden signed an executive order delaying new oil and gas leases on federal lands until a review that considers climate change impacts is completed. There is no timeline set for the length of the review, an Interior spokesman said Thursday.

“We’re going to review and reset the oil and gas leasing program,” Biden said on Wednesday.

The Interior Department order led to a delay, for eight days, of work at Project Peregrine in the National Petroleum Reserve-Alaska, managers with the project said.

Cruz Construction had approval to build the ice pad before the order was issued, said Dave Cruz, owner of the company.

But the order raised uncertainty about when the federal government would issue a permit to drill, Cruz said.

Australia-based 88 Energy was forced to put the project on hold, he said.

Fifty workers waiting to build the ice-pad project were suddenly put on standby, along with the drilling contractor and other support companies, Cruz said. The North Slope drilling season ends in April, raising concerns that the whole season could be lost, he said.

Erik Opstad, with 88 Energy subsidiary Emerald House, said the delay ended on Friday, after the drilling permit was issued. The delay created a significant expense, he said.

“Everyone is elated that we can now move forward as planned,” Opstad said.

Matthew Rexford, with Kaktovik Inupiat Corp., the local Native corporation for the only village in the Arctic refuge, said the corporation’s application to conduct seismic work is up in the air. The corporation had hoped exploration in the refuge would lead to a natural gas discovery, lowering the village’s high power costs.

“We’re still waiting to see if our program will be approved this year,” he said.

John Kerry, Biden’s global envoy for climate change, was asked at a White House press briefing on Wednesday what he would tell an oil field worker who believes Biden’s policies could end their livelihood.

“What President Biden wants to do is make sure those folks have better choices, that they have alternatives, that they can be the people who go to work to make the solar panels — that we’re making them here at home,” Kerry said. “That is going to be a particular focus of the ‘Build Back Better’ agenda.”

The new administration seems to think that every canceled job in oil and gas or mining can be replaced by a new one in renewable energy, said Mack, the former Alaska national resources commissioner.

[What’s the future of oil drilling in ANWR with Democrats in control of Washington?]

“The problem for Alaska is that doesn’t work out well for us,” Mack said.

Economists interviewed for this article said there are renewable energy prospects in Alaska, including wind power projects that can replace diesel-fueled generators in villages. But those jobs are currently no match for the value of the oil industry in Alaska.

“Renewable energy is not a replacement for North Slope oil,” said Matt Berman, an economics professor with the Institute of Social and Economic Research at the University of Alaska Anchorage.

The state needs to create a plan for an energy transition that is coming, as evidenced in part by the growth in the electric vehicle market, said Isaac Vanderburg, chief executive of Launch Alaska, which supports startup companies focused on saving energy and reducing consumption.

Launch Alaska is working on such a plan, he said. The opportunities for job growth extend beyond wind turbines and solar panels, he said. Mining can produce critical minerals needed for today’s technology, electrical vehicle charging stations can be built statewide and buildings can be made more efficient, he said.

“Not immediately, but over the next several years, if we as a state decide to wrap our arms around this energy transition, there is a huge growth opportunity for the state,” Vanderburg said.

Andy Moderow, state director of the Alaska Wilderness League, said other parts of Alaska’s economy, such as fishing and tourism, will need to play a role in helping the state transition to a new future.

“Oil and gas won’t disappear overnight,” he said. “But in the long term, whether we like it or not, the world is changing. Creativity will be needed to keep families healthy and whole up here.”

Political blowback and a lawsuit already

Tyler Cherry, a spokesman with the Interior department, said in an email that the review of the leasing program will involve “diverse stakeholders across the country” and formal consultation with tribal governments.

Alaska Republican Sen. Dan Sullivan on Thursday led 25 other GOP senators, including Alaska Sen. Lisa Murkowski, in signing a letter to Biden, warning that his orders could end thousands of jobs.

“We are trying to get a meeting with the president, to try and reason with him that the election he had was not a mandate to kill jobs in the energy sector, particularly during the pandemic and our economic recession,” Sullivan said in an interview.

“What I have been shocked by is how aggressively, in the first week of the administration, they have been going after oil and gas jobs,” Sullivan said on Wednesday. “Almost cavalier about it.”

Most oil in Alaska comes from state land at the Prudhoe Bay oil field.

But the measures could impact important prospects in the National Petroleum Reserve-Alaska and the Arctic refuge, Sullivan said.

[Trump officials tried to move most Bureau of Land Management staffers out of D.C. More than 87% quit instead.]

The Western Energy Alliance on Wednesday sued the Biden administration in federal court, asserting the indefinite suspension of the nation’s oil and gas leasing program is “unsupported and unnecessary.”

Voice of the Arctic Inupiat, an organization that advocates for Alaska Native communities on the North Slope, said in a statement that Biden’s “unilateral” actions will hurt local job opportunities and the economy.

“In the days before and since taking office, President Biden promised to unify the country,” the group said in a statement. “Then, in his first order of business, promptly alienated Alaska and other states that rely on energy development to keep the lights on in their communities.”

Erik Schlenker-Goodrich, executive director of the Western Environmental Law Center, said that nationally, many millions of acres of federal lands are already under lease to oil and gas companies, and many have yet to be developed. The pause on leasing won’t have much of an impact, he said.

“It should thus be perceived as an opportunity for states to take action to diversify and stabilize their revenue sources away from federal public lands fossil fuels,” Schlenker-Goodrich said. “States that act swiftly to take advantage of that opportunity will be far better positioned to thrive than those states that do not.”