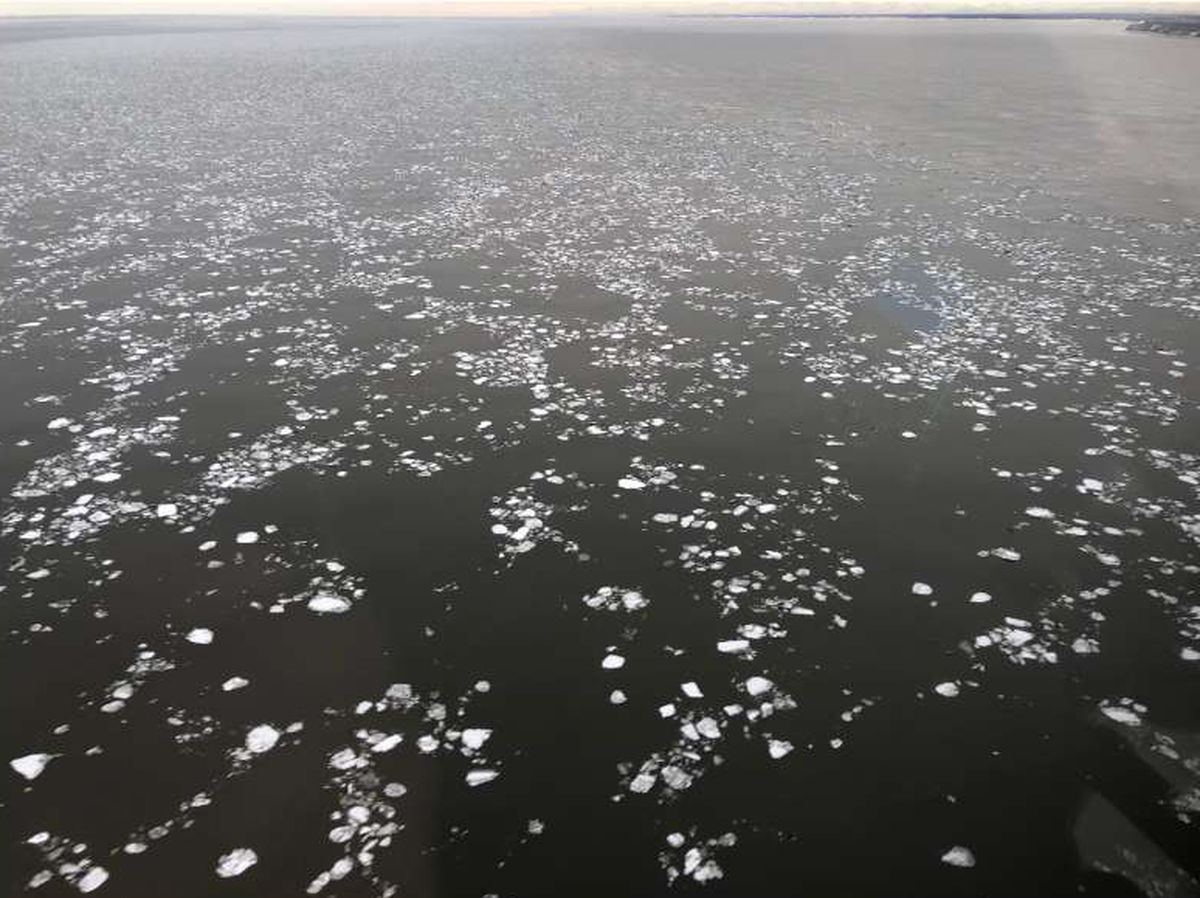 Cook Inlet sea ice conditions during a monitoring overflight on April 4, 2021, conducted after natural gas was found leaking from a line that provides fuel for two of Hilcorp's offshore production platforms in Cook Inlet. (Hilcorp photo)

Cook Inlet sea ice conditions during a monitoring overflight on April 4, 2021, conducted after natural gas was found leaking from a line that provides fuel for two of Hilcorp's offshore production platforms in Cook Inlet. (Hilcorp photo)

Natural gas was leaking from a line that provides fuel for the platforms’ operations, the Alaska Department of Environmental Conservation reported in a statement on Monday.

Hilcorp notified appropriate federal and state agencies after the leak was discovered and immediately began shutting down the impacted facilities at Platforms A and C, Hilcorp spokesman Luke Miller said in a statement on Monday.

“No sheen has been observed,” Miller said. “An assessment of the source of the leak is ongoing. No personnel or wildlife have been impacted.”

The incident occurred in the same 8-inch fuel line as Hilcorp’s natural gas leak in the Inlet in 2017. That leak went on for months and led to requirements that the company more closely inspect the fuel line to prevent future leaks.

The size and cause of this leak is unknown, the state agency said. An investigation is underway and the agency is monitoring response plans.

The escaping gas is not natural gas produced from the platforms. That production gas is used to power and heat homes across much of Southcentral Alaska.

Sonar scans to provide more information about the the leak will begin on Tuesday, DEC said.

“Divers will be deployed midweek to install a temporary clamp,” Miller with Hilcorp said.

Natural gas is considered hazardous, the DEC said. Animals at risk include endangered beluga whales that occupy the Inlet, it said.

The leaking line was installed in Cook Inlet, in the mid-1960s, and originally carried crude oil before it was converted to ship natural gas as fuel. The Inlet’s powerful winds and tides complicated the pipeline installation then, and some of its protective concrete coating cracked off, according to the recollections of a diver who helped lay the pipe. It extends about 7 miles from the coast to reach the platforms.

Hilcorp blamed the 2017 leak on abrasion from an underwater boulder. Such rock abrasion, aided by the Inlet’s notoriously strong tides, also caused leaks on a different part of the line in 2014, before XTO Energy sold it to Hilcorp.

The 2017 leak was sealed by a temporary clamp, after divers in April of that year were able to reach the sea bottom after sea ice cleared.

That leak went on much longer in part because Hilcorp was concerned that minimal power was needed for the platforms, a concern they overcame this time around, said Anna Carey with DEC. Hilcorp was also worried about depressurizing the gas line too much then, and potentially allowing residual oil to escape from the line, Carey said.

This time, Hilcorp worked with the Pipeline and Hazardous Materials Safety Administration to depressurize the line, before the leak was cut off, Carey said.

Hilcorp entered the Alaska market about a decade ago. It began buying up aging facilities in Cook Inlet, once the heart of Alaska’s oil and gas industry until the giant Prudhoe Bay field in northern Alaska began producing oil in the mid-1970s.

Hilcorp, after acquiring BP’s assets in Alaska, is the state’s second largest oil producer, and the top oil and gas producer in Cook Inlet.

To reduce the risk of spills in the Inlet, the company completed a $90 million plan in 2018 to shut down a crude oil tank farm on the western side of Cook Inlet close to Redoubt Volcano.

Bob Shavelson, with Cook Inletkeeper, an environmental group, said the leak is no surprise to him.

“This is not an accident,” he said. “It’s wholly foreseeable and part of Hilcorp’s business model to buy aging assets and squeeze out any remaining profits.”