Military veterans with PTSD turn to service dogs for help. But does it work? 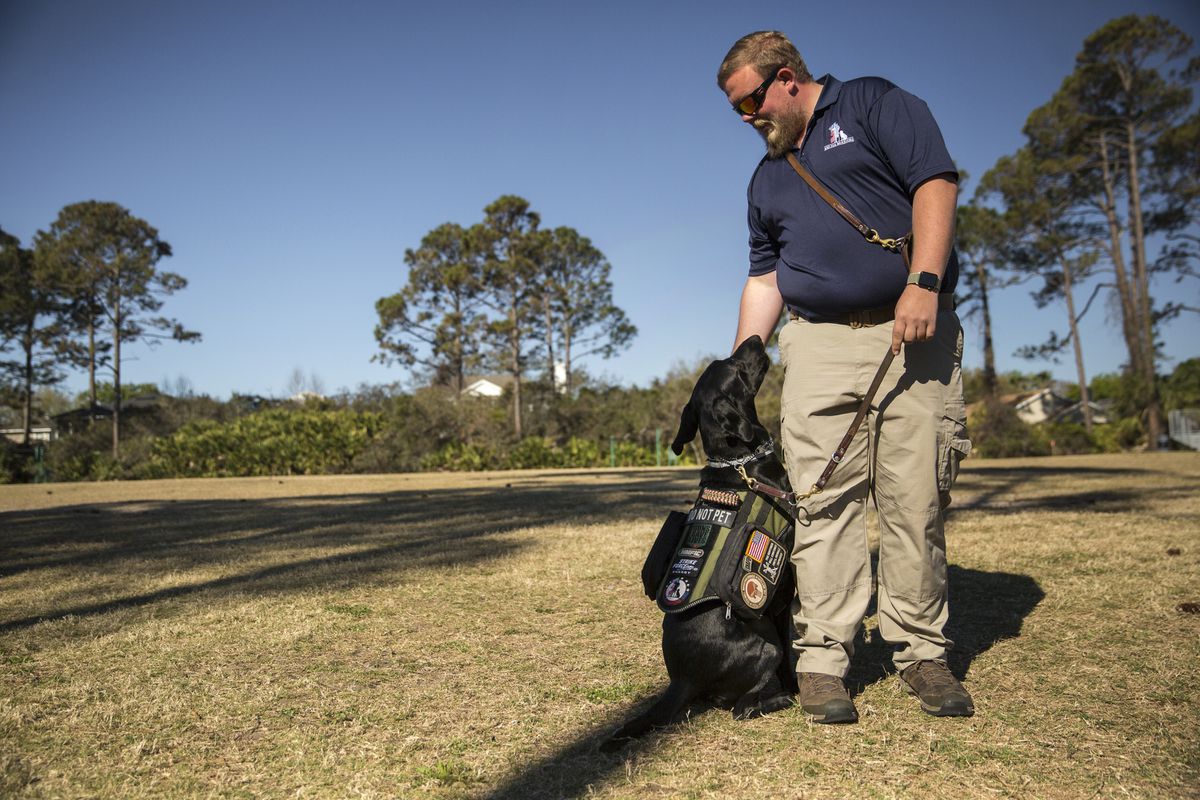 Adam Fuller and J.D. demonstrate the “cover” command for four veterans, women from different areas of the country who came to Florida to learn how to handle their own service dogs. (Photo by Kile Brewer for The Washington Post)

Adam Fuller and J.D. demonstrate the “cover” command for four veterans, women from different areas of the country who came to Florida to learn how to handle their own service dogs. (Photo by Kile Brewer for The Washington Post)

JACKSONVILLE BEACH, Fla. – Adam Fuller credits a simple, one-word command – and a black Lab mix named J.D. – for helping to save his life.

"Cover," he tells J.D., who is sitting to his left in a grassy field next to a park playground. The dog calmly walks to Fuller's right, then sits facing backward. Were someone coming up from behind, he'd wag his tail. The signal quells the sense of threat that plagued Fuller after serving in Afghanistan, that at one point had him futilely popping medications and veering toward suicide.

"Yes!" he praises J.D. as four women watch closely. They, too, are veterans with post-traumatic stress disorder, who are here to be trained and to leave with canine support of their own. All seem to appreciate the strategy behind "cover," as their goateed instructor demonstrates with J.D. "I wouldn't be here without him," Fuller says.

[How a service dog opened an Alaska veteran's world]

Every month, a new cycle of training begins with yet another class of veterans in a program run by the northern Florida K9s for Warriors. The seven-year-old nonprofit is one of dozens of private organizations that offer "psychiatric service" dogs to address the military's mental health crisis – enabling desperate vets to function in society, proponents say.

Yet even as success stories allow these groups to briskly expand their work, their approach faces growing scrutiny from researchers and debate among veterans groups, politicians and the Department of Veterans Affairs. At issue is whether the dogs truly help, what they should be trained to do and who should pay for them.

VA has covered veterinary care for service dogs that assist veterans with physical disabilities for more than 15 years. It has declined to do that for PTSD service dogs, however, citing a lack of empirical evidence for their therapeutic value. The agency is now conducting a $12 million multiyear study on the topic, even as it opposes legislation that would require it to pay for dogs in a separate pilot program.

"The numbers are startling on veteran suicides, and this is working," said Rory Diamond, a former federal prosecutor who quit to become chief executive of K9s for Warriors, where he had been providing pro bono legal services.

On a table in the organization's cheery lobby these days is a flier that says "research proves" the dogs save lives. It cites a recent first-of-its-kind study out of Purdue University that used standard questionnaires to assess PTSD symptoms and other aspects of mental health among 141 K9s for Warriors applicants, half teamed with a service dog and half on a wait list. Those with dogs showed significantly lower levels of post-traumatic stress, depression and social isolation, with higher levels of psychological well-being.

Still, lead author Maggie O'Haire, an assistant professor of human-animal interaction, emphasizes the study's "preliminary" nature and the need for more research on how service dogs might fit into treatment plans. "There is so much political agenda behind this topic," she said.

Other investigations are underway, including a clinical trial that O'Haire is conducting with funding from the National Institutes of Health. VA's remains the biggest in scope, though, as well as the study that has drawn the most criticism.

Its 2011 start was rocky: Dogs, provided by contracted groups, bit participants' children, and trainers were "biasing" veterans with talk of the dogs' healing powers, said Michael Fallon, the agency's chief veterinary medical officer. The project was halted and redesigned to include VA-hired dog trainers and a control group of veterans provided with emotional-support dogs – what Fallon calls a "very well-trained pet."

All 220 subjects were enrolled and matched with pooches by late 2017. Initial results are expected in 2019. Officials insist they're doing the kind of rigorous, controlled research that the field has been lacking.

"We really want to know the answer," said Patricia Dorn, director of VA's rehabilitation research and development service. "We want to know for the veterans and the public at large."

Dogs have provided services to humans for millennia, often as hunting and herding partners. But not until World War I were they systematically trained to assist people with disabilities, as guides for the blind. Service dogs now prompt deaf people when a doorbell rings, retrieve pills for people in wheelchairs and alert people with diabetes to blood sugar spikes.

Psychiatric service dogs are forging a new frontier in this field, and their mission blends those of task-oriented service canines and animals seen as providing emotional support. While the dogs paired with veterans with PTSD are commonly trained to wake them from nightmares and to "block" the space between their owner and another person, advocates also laud their ability to soothe a panicking vet and provide companionship and a tail-wagging reason to get out of the house – if only for walks.

"Being able to go to a store – and not just hate it and drop everything and walk out – is phenomenal," explained the 29-year-old Fuller, a K9s for Warriors graduate, as the women he was helping to train did laps with their dogs beneath the park's tall pines.

But even among psychiatric service dog providers, which range from well-established charities to small start-ups, there's disagreement about what the animals should do.

The accrediting group Assistance Dogs International published its first standards for training and placing PTSD dogs with veterans in January, after two years of heated discussions about how much mental health experts should be involved, which commands the animals should be taught and other issues, said Sheila O'Brien of America's VetDogs, who chaired the process.

The approved standards reject commands for a dog to search for an enemy or threat – something VA study dogs are trained to do – or to guard. Though ADI did not shun other "panic protection" commands, including "cover" and "block," those are also controversial.

"Our philosophy is that the dog is a bridge between his environment or her environment," said Cynthia Crosson, a psychiatric social worker and consultant for the dog provider group NEADS, where she helped develop the nation's first service dog program for veterans with PTSD a decade ago. "We feel that blocking kind of enables the symptoms rather than helps them cope with the symptoms."

Some veterans disagree. At K9s for Warriors, which works with a dozen veterans a month, it's common to hear stories of those who were scared to leave their houses or were gripped by anxiety in public – until they had a dog at their side that had been trained to provide a sense of space or surveillance.

"Ladies, this is the command you're going to love most," announced Greg Wells, another Afghanistan war vet, as he and Fuller taught the four female veterans how to direct their dogs to cover.

It was mid-March and midway through the three-week training, with a visit to Home Depot also on this day's schedule. One woman had come from Maine, another from Texas, another from Indiana. And from Michigan flew Adrianna Ruark, a 26-year-old Air Force veteran, who explained that her PTSD followed sexual traumas during her service – plural, she stressed – that left her wary of males, even canine ones.

"Yea!" Ruark told Crockett, the black shepherd mix whom she'd been given, when he nailed the cover command a few times. Ten days in, she said, she was still working to connect with the pooch.

For every applicant it accepts, K9s for Warriors picks up all costs but transportation. On its eight-acre campus, the veterans spend every moment with their assigned animals. They stay in apartments on the grounds, and they're even encouraged to share the queen-size beds with their dogs. Practicing commands is crucial, the organization teaches, but so is bonding.

Ruark and the others followed the park session with lunch at Chili's, where the four dogs snoozed under the table. She said she'd turned to K9s for Warriors in part to again feel comfortable in places like restaurants. "I'm hoping to be able to function more," she said.

That's the kind of goal for which VA clinical psychologist Louanne Davis sees the animals' potential as a complement to conventional therapies. One symptom of PTSD is hyperarousal, which can include a constant feeling of being on guard. A dog might provide a sense of calm and safety that helps veterans re-engage with the world, she said.

Yet, she cautioned, "we don't know the extent to which this might be good in the short run but not so good in the long run." Given the potential that a veteran might come to depend on the dog for a sense of security, "my goal would be to eventually wean them off."

The K9s for Warriors chief executive says about a third of its graduates "drop the leash" over time, using their dogs less and less for service. Another third expect to stop after their first dog dies. Only that last third express interest in having service dogs for life.

"Is that causing a harm?" Diamond asked. "The worst thing that's happened is: they have a well-trained dog. There are worse crutches, and VA is handing out a lot of them – like prescription drugs and opioids."

Most of the organization's canines come from shelters, along with a small number of purebreds donated by breeders. Those that pass temperament tests are schooled at the campus by professional civilian trainers and spend several months learning basic obedience and commands. The dogs that do well – the organization estimates their value by that point at $27,000 – are then paired with veterans, who learn to handle their dogs from vets who have completed the program. The other dogs are adopted out.

Cross, a floppy-eared black Lab mix, was one of the shelter mutts – nothing like the fluffy golden retriever Tammie Gillums pictured when she headed from her Gainesville, Virginia, home to K9s for Warriors last summer.

Gillums had been an Army human resources officer, a job she did not expect would expose her to trauma during a tour in Kabul. She was wrong a few times over, with one event being a suicide blast that threw her off her chair during duty in a guard tower. Seared into her mind was the image of the bomber's detached head.

Gillums, a 39-year-old mother of six in a blended family, came home in 2008 with crippling migraines. She couldn't sleep or concentrate. She started lengthy therapy with a VA psychologist and psychiatrist and at one point was on a half-dozen prescriptions simultaneously. She stayed home whenever possible.

One thing made the difference, she said: Cross.

Gillums had never owned a dog, and she admits she was skeptical. But it has been months since she has needed any medication.

Cross jumps on the bed to wake her from restless dreams. After a decade of dropping out of classes because of panic attacks and anxiety, Gillums for the first time completed a semester of courses at the community college where she is studying American Sign Language for an associate degree in deaf studies.

Her relationship with Cross, she said, "is some type of magic."

On a recent Friday, Cross rested at her feet during her African American history class. She accompanied Gillums on a shopping errand, then to a medical appointment.

While waiting in line at a Starbucks, Gillums quietly instructed Cross to "block," putting space between the veteran and a middle-aged man next to her.