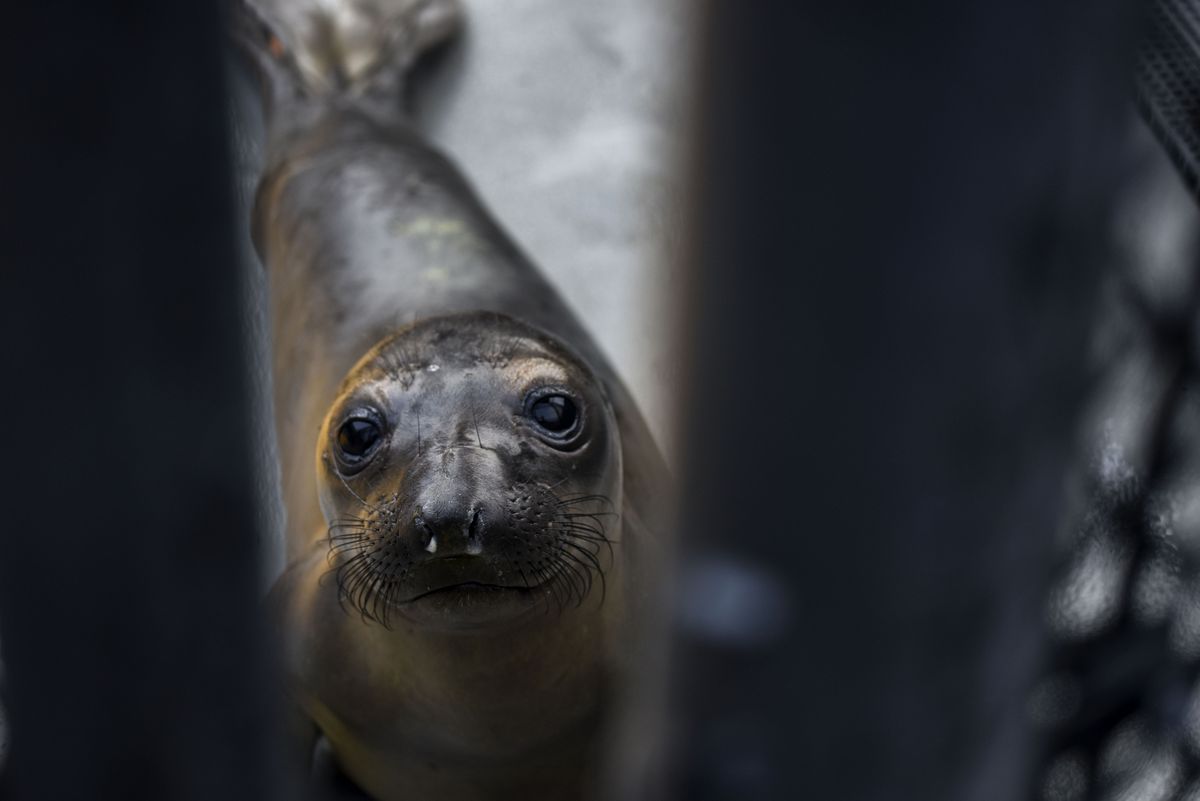 An elephant seal pup peers through a gate at the Marine Mammal Center in Sausalito, Calif., on April 2, 2019. Observers fear a resurgence in a marine heat wave that led to a spike in deaths of sea lion pups, among other species. (Washington Post photo by Michael Robinson Chavez)

An elephant seal pup peers through a gate at the Marine Mammal Center in Sausalito, Calif., on April 2, 2019. Observers fear a resurgence in a marine heat wave that led to a spike in deaths of sea lion pups, among other species. (Washington Post photo by Michael Robinson Chavez)

Across vast stretches of the Pacific Ocean extending from Hawaii north to the shores of Alaska, and southeast to near California, a new marine heat wave is underway. This event is widely referred to as “The Blob Part Two,” or just another “Blob.” The first event, which took place from 2014 through 2016, earned that odd moniker based on its bold red appearance on maps of ocean surface temperatures.

The new incarnation already has caused coral bleaching in the Hawaiian islands and may be tied to strandings of marine mammals along the California coast. If it intensifies and seeps into deeper waters, this marine heat wave could favor another drought in California by altering the jet stream flowing across the Pacific.

But it's not a sure bet that the current blob - a large splotch of red, resembling planetary acne, on global maps displaying sea surface temperature difference from normal - will have the staying power of the last event.

That is mainly because much of the warmer-than-average ocean temperatures extend down only to about 65 feet, not to deep depths, said Andrew Leising, a research oceanographer with the National Oceanic and Atmospheric Administration. That is in contrast with the last one, when warm waters went down to nearly 400 feet in some areas.

"It is its own event; it is doing its own thing," Hillary Scannell, an oceanographer at the University of Washington, said in an interview.

"Things are happening a little differently," Scannell said, noting that the last event was centered more in the northeastern Pacific and developed during the fall and winter, whereas this one has taken hold during the summer.

"A lot of folks are really worried because we've had these recurring heat waves in the northeast Pacific, and so the ecosystems here haven't had a chance to experience what's normal in a while," she said.

Hawaii has been seeing the most serious effects of this heat wave. The state had its hottest summer on record, with dozens of daily temperature records falling across the islands as well as all-time and monthly temperature records. Coral bleaching has damaged the reefs that help sustain the state's critical tourism industry, and that is forecast to worsen in coming weeks.

The unusually warm ocean waters mean Hawaii's traditional defense against approaching tropical storms and hurricanes does not exist this year, since it is relatively low ocean temperatures that protect the islands during most eastern Pacific hurricane seasons.

The causes of the ongoing marine heat wave are varied, including natural variability, weather and long-term, human-caused climate change.

A climate cycle involving the Pacific Ocean and atmosphere, known as the Pacific Decadal Oscillation, or PDO, is a phase that increases the odds of events such as this one but does not create them on its own, Scannell said. Instead, weather patterns featuring lighter-than-usual winds allow waters to heat up, and unless fall and winter storms churn enough cooler water up from below, the incipient Blob could expand and intensify.

The consequences of such an outcome would be far-reaching. The first Blob, for example, helped build up a strong ridge of high pressure in the upper atmosphere over the Northeast Pacific, routing winter storms away from California and plunging the state into its worst drought in at least 1,200 years.

Leising has been tracking marine heat waves in the Pacific using satellite data that extends to 1982. In that time, the 2014-2016 event stands out as the largest and longest-lasting such one on record. But the new Blob, even though it's only about 100 days old, has already clinched the second spot.

That reflects a greater trend toward more frequent, larger and severe marine heat waves as ocean temperatures increase in general thanks to global warming.

"These recent events are almost double everything else we've seen," Leising said.

Since this marine heat event is occurring at a different time of year, it may have different effects on ecosystems, but there already have been mysterious and worrisome events from Hawaii to Alaska and California, which may indicate that the return of the Blob is having similar effects to those of the last one.

In Alaska, where unusually warm waters exist all around the state because of the combination of an early melt of sea ice cover and the broader marine heat wave, there has been an unusually high number of sea bird and seal deaths, probably because of the unavailability of prey.

NOAA is also investigating an unusually high number of gray whale deaths that have occurred this year along the West Coast, from Mexico north to Alaska.

During the previous heat wave, harmful algal blooms caused toxins to build up in marine life off the West Coast, forcing fishery managers to shut down the Dungeness crab fishery in California three months early. It also led to a spike in deaths of sea lion pups, among other species.

Nick Bond, an atmospheric scientist at the University of Washington credited with coining the Blob moniker, said the last event caused "a litany of horrors," including dead sea birds washing up "in piles" along beaches in Washington state.

The unusually mild waters in the Gulf of Alaska and northeastern Pacific have made for generally poor conditions for juvenile salmon, Bond said.

Studies show that, like their counterparts on land, marine heat waves are becoming more intense as global warming continues.

"In a warming world, these events are going to become worse, and we are going to head toward a state where it is like a permanent marine heat wave," Scannell said.

Leising and Bond agreed, adding that it is the background warming that will cause the ocean temperatures to spike higher with each marine heat wave.