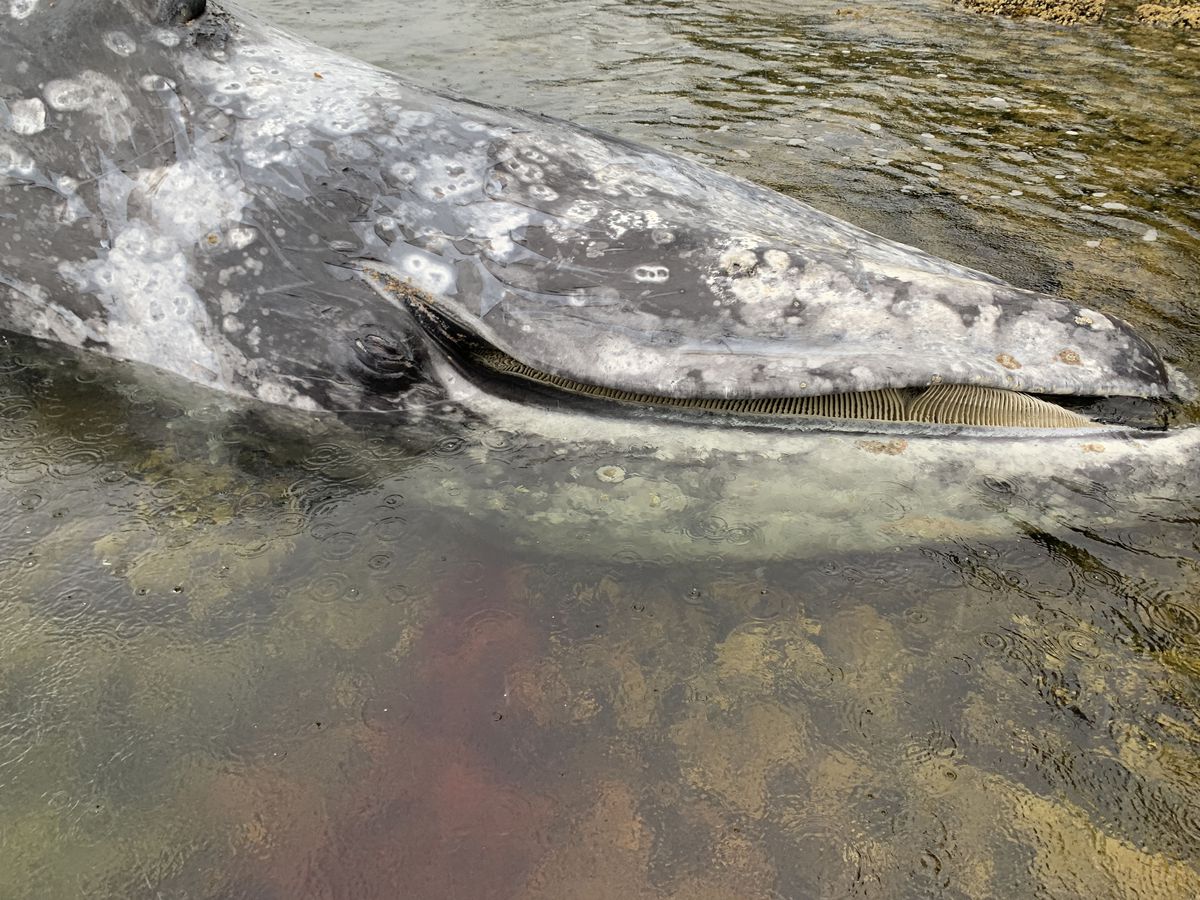 A fisherman on Monday reported a dead floating gray whale near Wrangell in Southeast Alaska. It's the eighth dead gray whale discovered off Alaska's coast so far this year. A team of researchers was scheduled to examine the carcass on Thursday. (Photo by Ceona Koch)

A fisherman on Monday reported a dead floating gray whale near Wrangell in Southeast Alaska. It's the eighth dead gray whale discovered off Alaska's coast so far this year. A team of researchers was scheduled to examine the carcass on Thursday. (Photo by Ceona Koch)

Three more gray whales were found dead along the coasts of Alaska this week as scientists continue to investigate why so many of the marine mammals are dying as they migrate up the West Coast.

So far this year, 167 dead gray whales have been found dead from Mexico to Alaska, according to the National Oceanic and Atmospheric Administration. The number of the carcasses found on U.S. shores, 81, is the most since 2000.

Many of the dead whales were skinny, NOAA said. Some scientists think it’s likely the whales didn’t get enough to eat last summer in the Bering and Chukchi seas.

The spike in whale deaths led NOAA to declare an “unusual mortality event” last month, prompting an official investigation into the cause of the die-off.

By Thursday, the tally of dead gray whales in Alaska had climbed to 10. Normally by this time of year, just three or four carcasses are reported, according to NOAA data from 2016 to 2018.

Most recently, a fisherman on Monday reported a dead gray whale near Wrangell in Southeast Alaska, NOAA said in a statement Thursday. A team led by a NOAA Fisheries veterinarian was expected to perform a necropsy on the carcass Thursday.

The whale near Sitka is too rotten and in too remote of a location to perform a necropsy, NOAA said. The other whale carcass is still “fresh.” If the carcass is secured, NOAA said it will send out a necropsy team.

Julie Speegle, a spokeswoman for NOAA Fisheries Alaska Region, said she didn’t have additional information Thursday about the age of the whales and whether they were skinny.

Gray whales have also washed up dead this year in Turnagain Arm, along Cook Inlet at Clam Gulch, near Cordova and on the coast of Kodiak Island.

NOAA officials have said they braced for additional dead whales in Alaska as the mammals continue their migration north.

In the Lower 48, so many dead gray whales have floated onto West Coast beaches that NOAA is searching for waterfront landowners willing to have a massive, decaying carcass on their property.

But in Alaska, much of the coastline is so remote that flights are being conducted to search for any dead gray whales.

The eastern North Pacific gray whale population is estimated at about 27,000. Each year, the whales make their way from Mexico to Alaska during one of the longest migrations of any mammal. They travel about 5,000 miles each way.

The whales feed during the summer in the Bering and Chukchi seas, normally eating about 1.3 tons of food per day, according to the Alaska Department of Fish and Game. The whales mostly eat tiny crustaceans such as amphipods from the ocean floor. They rarely feed during winters off the coast of Mexico or while migrating.

Scientists have speculated that climate change, including warmer waters and reduced sea ice, may have contributed to changes in the whales’ food supply in the Bering and Chukchi seas. They’ve also theorized that it’s possible the gray whale population has reached carrying capacity, meaning it has hit the number the ocean can support with the available food supply

Speegle said the investigation into the seals’ death is still in its early stages. It’s still unknown what caused the deaths and whether there’s any link to the whale die-off, she said.

Kumar was part of a team that traveled to the Western Alaska village of Kotlik this week to take tissue and skin samples from some of the seal carcasses.

The carcasses they found along the shores north of Kotlik, she said, were mostly younger seals — pups, juveniles and subadults.

They ranged from average to skinny in size, she said, though some were so badly rotted it was impossible to tell.

NOAA has asked anyone who spots a marine mammal in distress or stranded to immediately call NOAA’s Alaska Marine Mammal Stranding Hotline at 877-925-7773.