Learned on Kesugi Ridge: Sometimes a sufferfest is simply inevitable 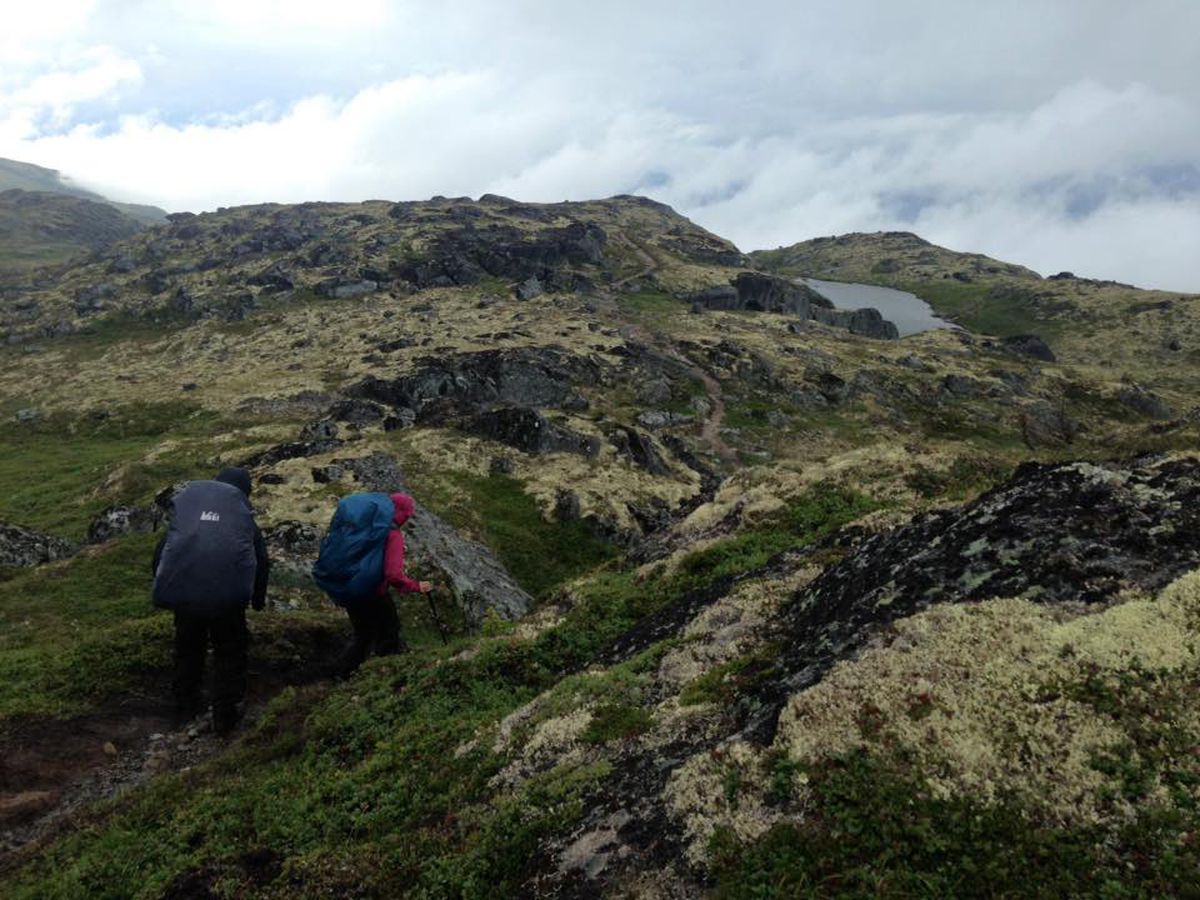 These are not words you want to hear when hiking Kesugi Ridge at Denali State Park.

We had stopped for a break a mile southwest of Skinny Lake — about two-thirds of the way to our exit point — to eat lunch and regroup. The comedian cracking wise about the distance left to cover was my buddy Nick Parker. He was mired in this sufferfest last July with me and Alaska Dispatch News reporter Suzanna Caldwell.

We laughed, but we didn't mean it. Perhaps we were bitter.

I took another bite of Parker's instant mashed potatoes.

Our trip started with boundless optimism. I had hiked the length of the Crow Pass Trail on a Thursday and while tired and sore, I was prepared to take on Kesugi a day later. We gave ourselves three days to complete the nearly 28-mile trek from the Little Coal Creek trailhead to Byers Lake, where we staged cars.

We felt so great when we started that we decided to finish in two days instead of three.

Big mistake. The weather turned miserable, dampening our gear and spirits in gusts and showers. We were socked in on the ridge and ended up following the trail without being able to see the surrounding terrain, much less Denali, the main reason Kesugi Ridge is a highly regarded traverse.

Toward the end of that first day, Caldwell turned back, saw me and said, "You don't look so good." She helpfully recommended we find a spot to camp quickly.

After a night spent willing our tents to stay grounded in blasts of wind, we set out in the morning and realized we hadn't covered as much ground as we thought we had. Between the paper trail map I had borrowed from a co-worker, the distance reading on a smartphone app and a trail marker, we had three widely disparate estimates of how much trail lay between us and the car. Throw in information from the map we saw at the trailhead, and none of them were promising.

At that point, though, we were committed. With a well-marked path, we knew where we were going, even if we didn't know exactly how much farther we had left to hike.

By the time we reached Byers Lake, we were barely speaking to one another. The bridge on the north side of the lake was out of commission, so we had to take the long way around. On the verge of bonking with only a mile (or 2, or 4) left, we needed a snack break.

The wacky, wide grins from the start of our trek had been tamed by weather and fatigue into weak smiles. I left Kesugi Ridge reeking of sweat, mud and DEET.

[Start your Bomber hike early, or be willing to face the consequences]

Heading back to Anchorage, Caldwell and I devoured a feast at McDonald's in Wasilla, one of our few late-night options. Between bites of french fries, chicken nuggets and Denali Mac in the parking lot, we remembered how hopeful we were the previous day about finishing in time to eat at the Talkeetna Roadhouse before it closed. The thought of hotcakes had spurred us on when we grew dispirited.

It was easy to forget we finished in the time frame we aimed for, and we reached the end relatively unscathed.

(A month later, Alaska Dispatch News outdoors columnist Alli Harvey wrote about a trip on Kesugi Ridge during which she was blessed with crystal-clear weather over four days. As I read it, my right eye started twitching.)

If you can get through this kind of Type 2 fun — described by Parker as the kind of adventure that's "miserable during, but when you look back on it, it was pretty good" — and still end with a smile on your face, no matter how feeble, you've had a good day.

After all, does distance even matter when 4, 6 or 10 miles will all feel like an eternity to your weary body?