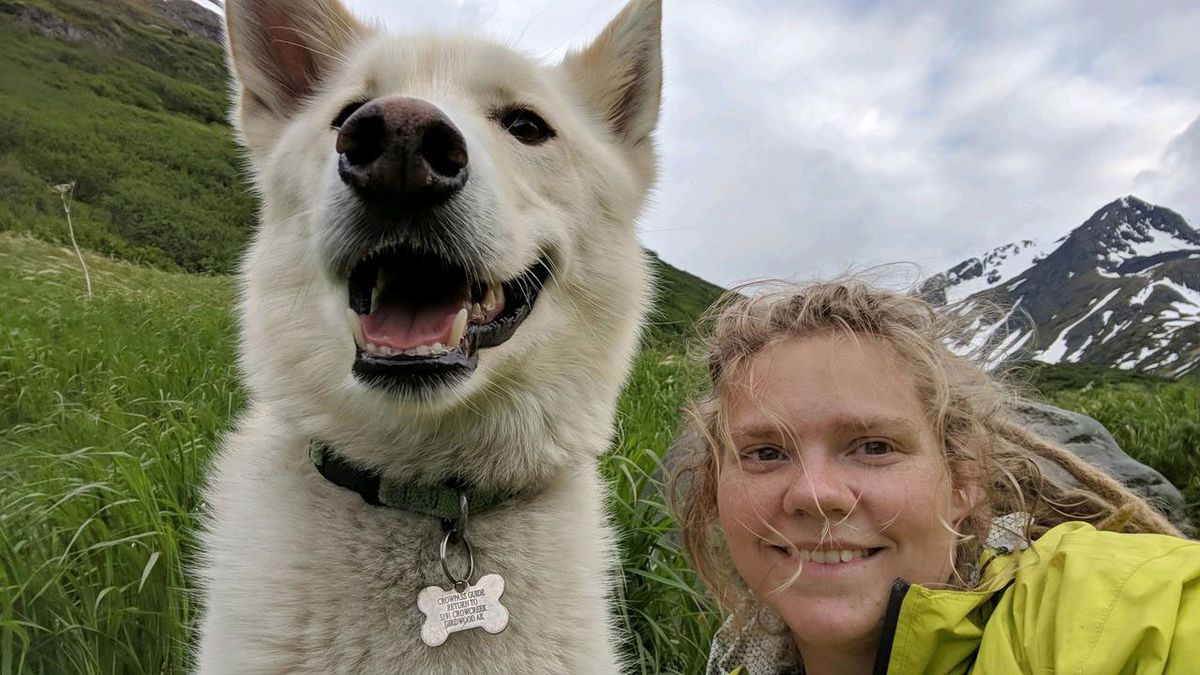 Nanook, a 7-year-old Alaskan husky, helped Amelia Milling when she fell during a hike through Crow Pass and then again crossing Eagle River on Wednesday.  (Photo by Amelia Milling)

Nanook, a 7-year-old Alaskan husky, helped Amelia Milling when she fell during a hike through Crow Pass and then again crossing Eagle River on Wednesday.  (Photo by Amelia Milling)

A 7-year-old Alaskan husky named Nanook is being credited with helping rescue a cold, injured hiker Wednesday night in the Eagle River Valley.

According to Olsen, a trooper helicopter was launched shortly after 6:15 p.m. Wednesday when the agency received a report that an emergency locator beacon had been activated near Eagle River along the Crow Pass Trail. When Olsen and pilot Tab Burnett arrived, they found a wet and injured Amelia Milling alongside the river accompanied by a white dog. Both were airlifted to Anchorage, where Milling, 21, was treated for bumps and bruises and released.

Olsen said Milling told them that, after sustaining injuries a day earlier, she had fallen while trying to cross Eagle River. That was when Nanook sprang into action, helping pull her from the glacier-fed river, which is typically between thigh- and waist-deep on most Crow Pass hikers this time of year.

"She slipped and fell, and the dog was able to save her and get her back to shore," Olsen said.

[In Sitka hospital, a dog runs for help when owner has a seizure]

Milling is a college student from Tennessee who studies visual media at Rochester Institute of Technology in New York. She said she set out Monday afternoon for a planned three-day hike. Things were fine until she reached the pass, where she encountered more snow than she expected.

"I'm a Southerner, so I wasn't thinking about snow," Milling, who is deaf, said via an interpreter Thursday.

She camped out and on Tuesday morning attempted to descend into the Eagle River Valley. But she lost her trekking poles, and as she tried to glissade down a long snow slope, she hit a rock that launched her into the air.

When she landed — sliding another 200 to 300 feet in the snow — she was banged up and in shock. That's when the dog arrived, seemingly out of nowhere.

"My first response was, where's the owner?" she said. "Then I saw the collar and it said (the dog) was a Crow Pass guide, and I realized that he was there to help me."

Milling said she followed Nanook back to the trail, and credited the dog for helping her find her way. The duo camped overnight Tuesday, bonding over beef jerky. Nanook slept outside the tent, and in the morning the dog was still there.

The pair walked to the ford site across Eagle River, but Milling said she struggled with the swift, cold water and tried to find a better place to cross.

That proved to be a mistake, as the spot she chose proved too deep. She fell, grabbing her unbuckled backpack as she floated in the river. Milling said she struggled to return to shore, with Nanook jumping in to grab her pack and help her out of the freezing glacial water.

"I was struggling," she said.

Nanook helped Milling get out of the water. At that point, she was wet and cold, so she got into her sleeping bag and tried to warm up. After a couple hours, she realized she was in too big a predicament to get out on her own.

"I really wanted to get out of there," she said.

Nanook was licking her face, she said. She pushed the emergency locator and waited for troopers to arrive.

At first, Olsen said, troopers figured the dog belonged to her when they found the pair alongside the river just before 7 p.m. Wednesday. But when they looked at its tags, he said, they learned the dog actually belonged to Scott Swift, who lives at the end of Crow Creek Road, near the south end of the 24-mile trail between Girdwood and the Eagle River Nature Center.

"Halfway through the flight, we found out the dog was not hers," Olsen said.

Nanook wears dog tags that say "Crow Creek guide dog" and include a number to contact owner Scott Swift. On Thursday, Swift said the dog frequently embarks on treks into the Chugach, where he'll accompany hikers all the way to the nature center.

"He's been doing it for years now," Swift said.

Swift said the dog hikes the trails in winter and summer, "hooking up" with other wilderness wanderers for mountain adventures. A few years ago, Nanook was on hand to help a young girl from the river.

"This is the second time I've heard of he has saved someone from drowning in that river," he said.

Swift said "Nookie" — whom he adopted about six years ago in Eagle River — has no search-and-rescue training.

"He just does it on his own," Swift said.

Wednesday's rescue attempt was the third time in two days the troopers have launched a helicopter, and the only one that had a positive outcome. On Tuesday night, searchers aided in a search for a woman and child who drowned in the Matanuska River; on Wednesday, the helicopter was launched into the South Fork Eagle River Valley to help find a missing hiker who was later found dead of a suspected bear attack.

"It was nice to get someone out alive and well," said Olsen, with Alaska State Troopers.

On Thursday, Milling was resting and recovering from her ordeal. She said she has some bruises but is otherwise OK and would like to return to finish her hike — albeit with more company.

Milling said she prepared for Crow Pass by doing a 20-mile section of the Appalachian Trail and several short day hikes in Alaska. But the backcountry solo trek was a big step up in class.

"It was definitely harder than what I was expecting," she said.

Milling said she thinks Nanook was instrumental in keeping her alive while on the trail, and she'll always have a special bond with him.

"I believe the dog is a guardian angel," she said.

"I told him several times that I love him and I'll never forget him."