An Iditarod like no other? Some mushers aren’t too concerned about adapting to this year’s changes 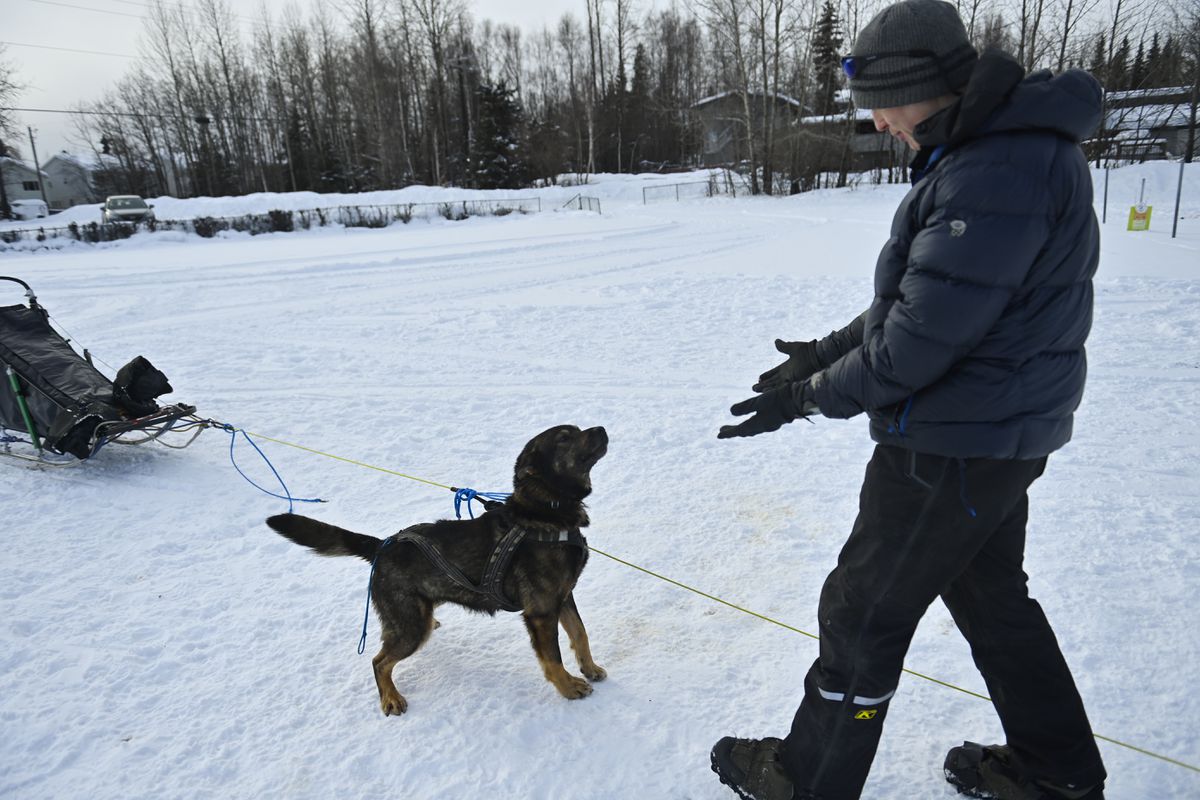 Iditarod rookie Chad Stoddard of Fairbanks greets a team member after a short run at Tozier Track on Friday. Stoddard's team is a blend of Iditarod dogs from Sven Haltmann and Yukon Quest dogs from Torsten Kohnert. "So, I’m very much the rookie and they’ll be showing me the way. I’ll just try to hang on and not screw things up,” he said. (Marc Lester / ADN)

Iditarod rookie Chad Stoddard of Fairbanks greets a team member after a short run at Tozier Track on Friday. Stoddard's team is a blend of Iditarod dogs from Sven Haltmann and Yukon Quest dogs from Torsten Kohnert. "So, I’m very much the rookie and they’ll be showing me the way. I’ll just try to hang on and not screw things up,” he said. (Marc Lester / ADN)

For many of the world’s premier long-distance mushers, the days before the 1,000-mile Iditarod are normally a hectic sprint: meetings, public appearances, packing, logistics and schlepping sled dogs here and there.

But this year, not so much.

“It doesn’t feel like Iditarod, because it’s so quiet,” said race veteran Matt Failor, who by early March is typically frantic, hosting family from out of state and opening his kennel in Willow to visiting fans on top of his own race preparations.

Failor spoke Thursday as he drove to Anchorage with friend and fellow racer Richie Diehl of Aniak to take one of their mandatory COVID-19 tests. As part of its elaborate virus mitigation plan, the Iditarod is requiring multiple negative tests before and during the race from mushers, volunteers, veterinarians, pilots and anyone else attached to activities along the trail.

It appointed a COVID-19 “epidemiology czar” and worked with public health experts and elected officials on its prevention policies, with a goal of zero spread during this year’s event.

As part of that, most of the pomp and pageantry that is a hallmark of the Iditarod each March was canceled or moved online. Instead of names being drawn from a mukluk at a packed banquet in Anchorage’s Dena’ina Center, this year’s starting order was determined by a digital number generator. Rather than public events for fans and a ceremonial start in Anchorage, mushers trekked into town for unceremonial nasal swabs in a hotel parking lot. On Sunday, they’ll convene for the start at Deshka Landing, a popular boat launch on the Susitna River near Willow, north of Anchorage.

“Because the traditional mushers banquet is postponed, and other in-person, pre-race meetings are virtual this year, the mushers will not physically be in the same place until the actual start at Deshka Landing,” race marshal Mark Nordman said in a statement.

[Last year, an Iditarod rookie made it about 96% of the way to Nome. It has haunted him ever since.]

Many competitors are blasé about the changes.

“It’s not really a big deal,” 2019 champion Pete Kaiser said of the altered route and bare-bones accommodations at checkpoints.

This year’s “Gold Trail Loop” will buttonhook around ghost towns in the Iditarod Mining District before mushers re-cross the Alaska Range back toward the finish at Deshka Landing. Though it means backtracking up a gorge, the route avoids the notoriously fickle and combative conditions along the Norton Sound coast that greet mushers from Unalakleet through to Nome.

“The coast is its own beast, and the Yukon River can be the same way,” Kaiser said.

His only major gear adjustment is a better sleeping pad.

“All that we’re good at is being comfortable outdoors,” Kaiser said. “I don’t think it’s gonna be too rugged.”

It’s not clear how many mushers have been vaccinated heading into this year’s race. Hailing from Bethel, which has one of the highest vaccination rates in the state, Kaiser has gotten both rounds of shots. Still, he plans on closely observing the race’s mitigation measures, which isn’t an enormous adjustment in an event where competitors spend most of their time alone.

“It’s a pretty tight bubble when you’re out in the middle of nowhere,” Kaiser said. He said he was more concerned about exposure during his time in Anchorage than on the trail.

With the race avoiding almost all communities, musher accommodations will consist mostly of sparse wall tents or shelter cabins at checkpoints. In McGrath, there’s an airplane hangar set to host mushers who choose to take their 24-hour mandatory stops there. Otherwise, rest stops will involve camping out.

“I’m not thrilled about being around other people,” said Cody Strathe of Fairbanks. “I’m gonna try to spend less time in checkpoints than usual.”

Strathe said he and his wife, fellow musher Paige Drobny, have spent barely any time with anyone outside their immediate bubble during the last year.

“I’m gonna stay out of checkpoints as much as possible,” said Drobny, who has finished as high as seventh in the Iditarod.

She sounded nonchalant about stopping in frigid temperatures. “We’re used to camping out at minus 10,” she said.

[‘Not in it for the glamour’: How this Alaska mushing couple went from 2 dogs to 54]

The sparse checkpoints may also force mushers to run a race more in line with their dogs’ needs than their own. Lacking the lure of hot coffee, a warm cheeseburger or a lukewarm sleeping pad, four-time champion Dallas Seavey of Talkeetna anticipates rest stops that align more with his team’s tempo than his desire for human creature comforts.

“I don’t feel tethered to checkpoints,” he said.

Though checkpoints typically provide conveniences like hot food, a place to dry out gear and what he called “good human water,” they are far from essential, Seavey said.

With fewer spectators and support staff, some mushers may find this year’s race more like their solitary training runs than a normal Iditarod.

“I live in the middle of nowhere,” said Seavey, who said he rarely ventures into town if he doesn’t have to. “I think it’s gonna be harder for the race staff.”