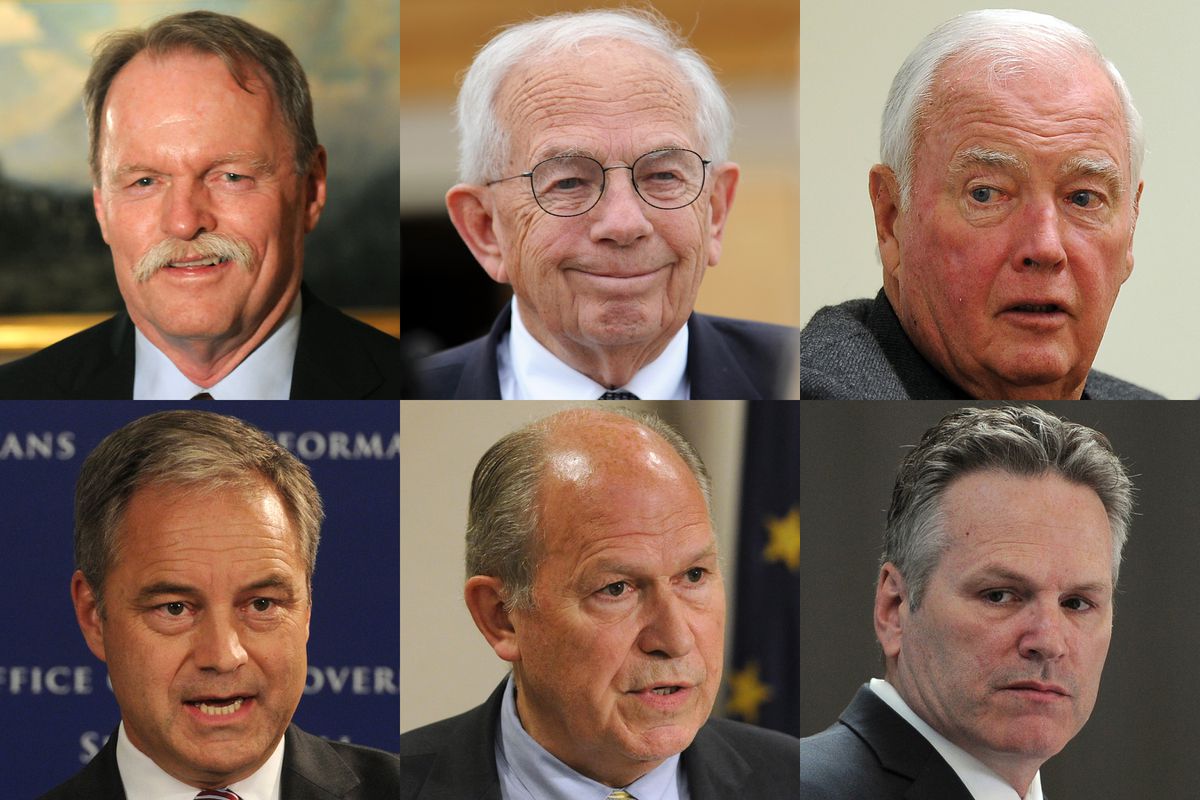 Five former Alaska governors this week said state leaders need to talk and compromise to end their pitched, dug-in battle over the Permanent Fund dividend and Gov. Mike Dunleavy’s $444 million in vetoes. Some said Alaskans’ dependence on the annual dividend payment set the stage for the current budget meltdown.

“Problems get solved one step at a time and with communication,” said Sean Parnell, a Republican governor from 2009 to 2014. “People need to find agreement on the small things and build out.”

The state faces an unprecedented political clash, with the Legislature so divided it can’t get enough members in Juneau to override vetoes that economists say will throw Alaska back into recession. A Friday night override deadline looms.

The Legislature is also sharply split over the dividend. Lawmakers in Juneau are considering a $1,600 payment while their counterparts hold firm in Wasilla, supporting the governor’s plan to pay a $3,000 dividend using the traditional formula.

Some ex-governors on Wednesday suggested the vetoes, including the largest — $130 million that slashes 41% of state funding from the University of Alaska — are too big and too many for the economy to safely handle all at once.

The state budget needs some cutting, said Bill Sheffield, a single-term Democratic governor elected in 1982. The reductions should include the university system that can’t afford to have so many campuses throughout Alaska, he said.

But teamwork should be guiding the changes to UA, said Sheffield, 91. Instead, the governor’s huge cut in late June surprised UA leaders, who had expected a $60 million reduction and are now scrambling to respond.

“Instead of the governor just shutting them down, he should talk to those people about how they are going to straighten things out, and how they will cut costs and still have a university system,” Sheffield said.

“And half the lawmakers can’t be in Wasilla and half can’t be in Juneau. Goddammit, they’ve got to get together and get the work done," he said.

Sheffield said the problem is that Alaskans have been “spoiled” by the dividend, and they like politicians who promise big ones, he said.

“We caused the problem ourselves,” Sheffield said. “When I ran for governor, I was against the Permanent Fund dividend. When I got there, it was too late, it was already in place.”

Frank Murkowski, a one-term Republican governor elected in 2002, said in a commentary on Wednesday that he agreed with Dunleavy’s long-term goal of balancing the budget and making government more efficient to attract investment.

But measured steps are needed over “draconian” cuts, wrote Murkowski, 86.

Dunleavy’s goal of paying a full $3,000 Alaska Permanent Fund dividend, an entitlement, threatens core services Alaskans need such as health care, public safety and transportation, Murkowski wrote. The Legislature and governor need to find common ground to head off an “economic crisis of a magnitude” Alaska has never experienced, he wrote.

“There is no question the cost of state government must be reduced and some services curtailed, but the process must be carefully planned and explained," Murkowski wrote. "Neither the Legislature nor the administration has explained how these core services will function after the cuts, or prepared Alaskans for the consequences of the abrupt termination of some programs.”

Steve Cowper, 80, a one-term Democratic governor, vetoed $325 million from nearly $3 billion in Legislature-approved spending in 1990 near the end of his term. Cowper said those were record-sized vetoes for that time.

“I was vetoing surplus" spending added at the last minute after oil prices rose, Cowper said.

“He’s vetoing pretty much what it takes to have a state government at all,” Cowper said.

Cowper said Alaska is in trouble partly because people have “taken refuge behind their deep beliefs" that they’re entitled to a $3,000 dividend.

The state is on track to become the nation’s “laughingstock,” he said.

“People in other states will look at a $65 billion (Alaska Permanent) Fund, and say these people are shutting down their university, they’re wrecking their school system. They refuse to do anything about it, and they’ve got $65 billion in the bank."

Cowper said a legislative majority should threaten not to pay the “giveaway," his term for the dividend. That will bring people to the table.

“The Legislature has got to draw a gun and get out on the street, and the gun I see is that they refuse to appropriate any money for the so-called dividends,” he said. “Then they’ve got to get together and work it out, because everyone dies on that one.”

Parnell said the Legislature should find agreement in an area everyone supports, such as making sure $1 billion in federal transportation construction aid will be approved. The state could lose that money if the unfinished capital budget isn’t approved by the end of the month.

“You try to build trust on things you can agree on when that trust is absent,” he said. “And that can lead to other agreements."

Bill Walker, a one-term unaffiliated governor replaced by Dunleavy, said in a text that it’s generally not helpful for former governors to be “backseat drivers" to current governors. But having made “significant” cuts as governor, he appreciates how “painful” they are.

“My hope is that our leaders can set aside their differences and pull together to find the compromise that’s in the best interest of Alaska and Alaskans," Walker wrote.

Sarah Palin, a Republican governor who quit partway through a term that began in 2006, did not respond to requests for comment. Neither did Tony Knowles, a two-term Democratic governor elected in 1994.