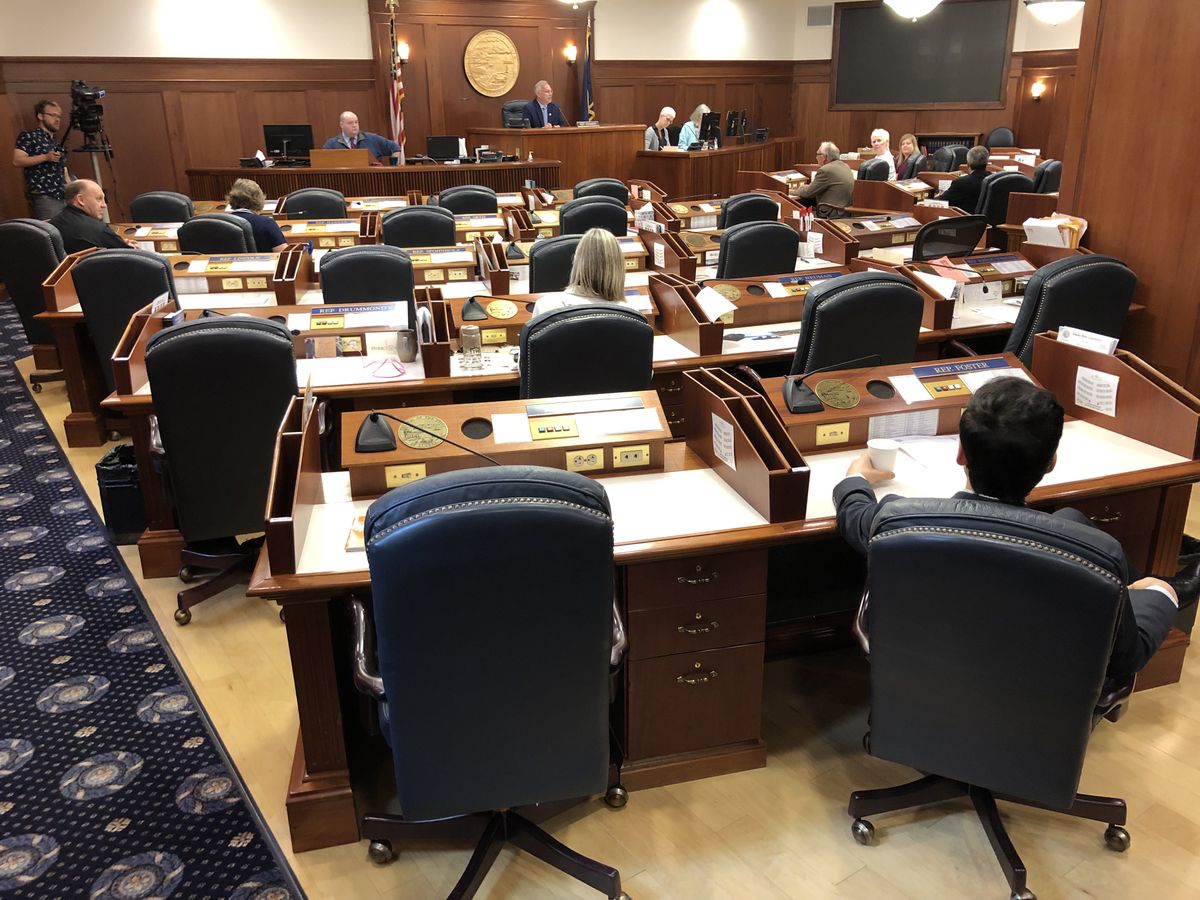 A day before the scheduled vote to override Gov. Mike Dunleavy’s decision to veto $444 million from Alaska’s state operating budget, members of the Alaska Legislature still lacked the necessary 45 votes.

About a third of the Legislature on Tuesday remained away from the state Capitol in Juneau, where legislators have scheduled a vote at 11:30 a.m. Wednesday to determine whether the governor’s decision stands. The missing lawmakers continue to exert their claim — backed by the governor — that Wasilla is the right location for the special session and any action taken in Juneau is invalid. Those in Juneau strongly disagree.

As the Legislature’s fight over where to meet pushes into another day, the list of individuals and groups calling on lawmakers to throw out Dunleavy’s budget vetoes grows. More than 1,500 people gathered in Anchorage on Tuesday evening to protest the cuts. Emails have flooded legislators’ inboxes, and concerns have been raised about the vetoes pulling Alaska back into a recession. There are also Alaskans who have dug in, are supporting the governor and are demanding big budget cuts and $3,000 Permanent Fund dividend checks.

The clock keeps ticking amid the chaos.

“We’re 22 strong,” said Sen. Shelley Hughes, R-Palmer, in an interview Tuesday, referring to the group of lawmakers who believe Wasilla is the right location for the special session under the law and constitution. “Twenty-two is a significant number when you need 40 to call ourselves in (to session) or 45 to override a veto.”

House Speaker Bryce Edgmon, I-Dillingham, said there’s no possibility that lawmakers in Juneau will go to Wasilla this week.

“The Legislature’s conducting its business in Juneau, and that’s where it intends to remain,” he said.

Dunleavy, meanwhile, is in Anchorage, and some lawmakers have begun to criticize his absence.

“He needs to come to Juneau and sit down with the Senate president and speaker of the House,” said Rep. Tammie Wilson, R-North Pole.

The governor’s vetoes came atop more than $100 million in budget cuts approved by the Legislature earlier this year. The vetoes aren’t the only issue the Legislature is facing. Lawmakers also have not yet set an amount for this year’s Permanent Fund dividend and there’s an unfinished capital budget. The failure to finish that budget on time has already stalled thousands of state-paid college scholarships, and the state could also lose nearly $1 billion in federal transportation construction aid if the budget isn’t approved by the end of the month.

The only legislator to change locations by Tuesday was Wilson. She joined the leaders of the House and Senate in Juneau, having been in Wasilla on Monday.

“Did you bring five more with you?” joked Rep. Bart LeBon, R-Fairbanks.

Though Wilson is now in Juneau, she said she’ll vote against overriding the governor’s vetoes because the lawmakers aren’t deciding on the cuts line by line. Instead, they’ll do a single up-or-down decision on all 182.

“I’m not supporting the veto overrides because it’s an all or nothing (vote),” Wilson said.

She and others reaffirmed Tuesday that the odds are against an override because fewer than 45 lawmakers are expected to be in Juneau.

“I think they’re listening to the wrong drummer," Hoffman said. “I think they need to listen to the people who elected them and be down here to address the services that are in jeopardy.”

If the override fails, he said, “I believe no corner of Alaska will be held harmless."

A failed vote on Wednesday would not be the final word on funding. The Legislature could decide to vote again, according to Senate Secretary Liz Clark, as long as it’s before the end of the day Friday.

If the governor’s vetoes are upheld, legislators could restore funding in the capital budget or a supplemental budget, but both of those would still be subject to veto.

While the House and Senate finance committees on Tuesday held hours-long hearings in Juneau, though with fewer legislators participating than usual, those in Wasilla held an informal meeting that lasted less than two minutes.

Twelve legislators attended the meeting at Wasilla Middle School, with two more arriving after it ended. About 18 people sat in the school bleachers to watch. There were no protests like a day earlier.

In brief remarks to the group, Sen. Mia Costello, R-Anchorage, thanked everyone for coming. Since they didn’t have enough legislators to take up official business, the meeting ended quickly. Costello said they’d be back on Wednesday and “again, hope that those in Juneau will heed the call made by Gov. Mike Dunleavy.”

Hughes said Tuesday’s attendance was not reflective of the entire group of lawmakers who are standing behind Wasilla as the location of the special session. Some could not make it to the meeting. The meeting is more of a “technical session” until they have a quorum, she said.

“As a law-abiding lawmaker I need to be here,” Hughes said. “If the court rules that Juneau is legitimate, then that is a different story and I would consider going to Juneau.”

Rep. Sara Rasmussen, R-Anchorage, was not at Tuesday’s meeting. She said she was told that the Mat-Su delegation would attend the meetings at the middle school and let everyone else know if they were needed to establish a quorum. Unless the governor changes the call to Juneau, she will be staying in Southcentral, she said.

Asked if he would be in Juneau for Wednesday’s override vote, Rep. Laddie Shaw, R-Anchorage, said, “absolutely not.”

In a June proclamation, Dunleavy called the special session for Monday in Wasilla, his hometown, and recommended Wasilla Middle School as the meeting spot.

Shaw said the only way out of the deadlock was “to get the majority to compromise,” referring to the group in Juneau. “Come here and we can make decisions collectively,” he said.

Senators in Juneau don’t believe the governor has the power under the constitution to set the location of the session. They rebutted the Wasilla lawmakers’ arguments with a series of speeches from the Senate floor, where 14 legislators were present Tuesday morning.

“The constitution does not give a governor the power to say where we meet. Now, I know there’s a statute, there’s a law that tries to give the governor that power, but there’s no law that can change the constitution,” said Sen. Jesse Kiehl, D-Juneau.

“Members of this body and the (House) must come here at this time of crisis to do the work … that is designed for the capital,” said Senate Minority Leader Tom Begich, D-Anchorage.

Sen. John Coghill, R-North Pole, called the location dispute a separation of powers argument between the governor and the Legislature.

“Right now, there’s a contest between one branch and another, and I’m sorry about that," he said.

Because the Legislature is made up of 60 people, it has 60 opinions.

“The problem is it gets messy sometimes, because it’s not like we’re always unanimous,” Coghill said.

During the brief meeting in Wasilla, Sen. Mike Shower wore headphones, and said he was listening to the Senate Finance meeting happening in Juneau. He didn’t want to miss anything but he’s not going to the Capitol in person, he said, because he’s not breaking the law. Those legislators need to come to Wasilla, he said.

“Come up here and either change the location, and we’ll go take up business wherever that is, or come up here and let’s just get the business done because we could do this in a day,” Shower, R-Wasilla, said.

Shower said he didn’t support overriding any of the vetoes. He said the state needed to find just how lean the budget could truly be, and if they find later the cuts went too far, they could add money back into a supplemental budget.

“We’re already discussing how to fix things if we find areas where we just can’t cut that much,” he said.

Rep. Gabrielle LeDoux, R-Anchorage, was in Wasilla on Monday but stayed away from both that city and Juneau on Tuesday.

“I see this as a standoff, and unless people start talking to each other and start talking to the governor, this is going to be disastrous,” she said. “The way it seems to be going right now, is the vetoes will probably stand and we won’t have a full dividend, making absolutely everybody unhappy.”

James Brooks reported from Juneau and Tegan Hanlon from Wasilla.

More coverage of Gov. Dunleavy, the Alaska Legislature and the debate over budget vetoes and Permanent Fund dividends