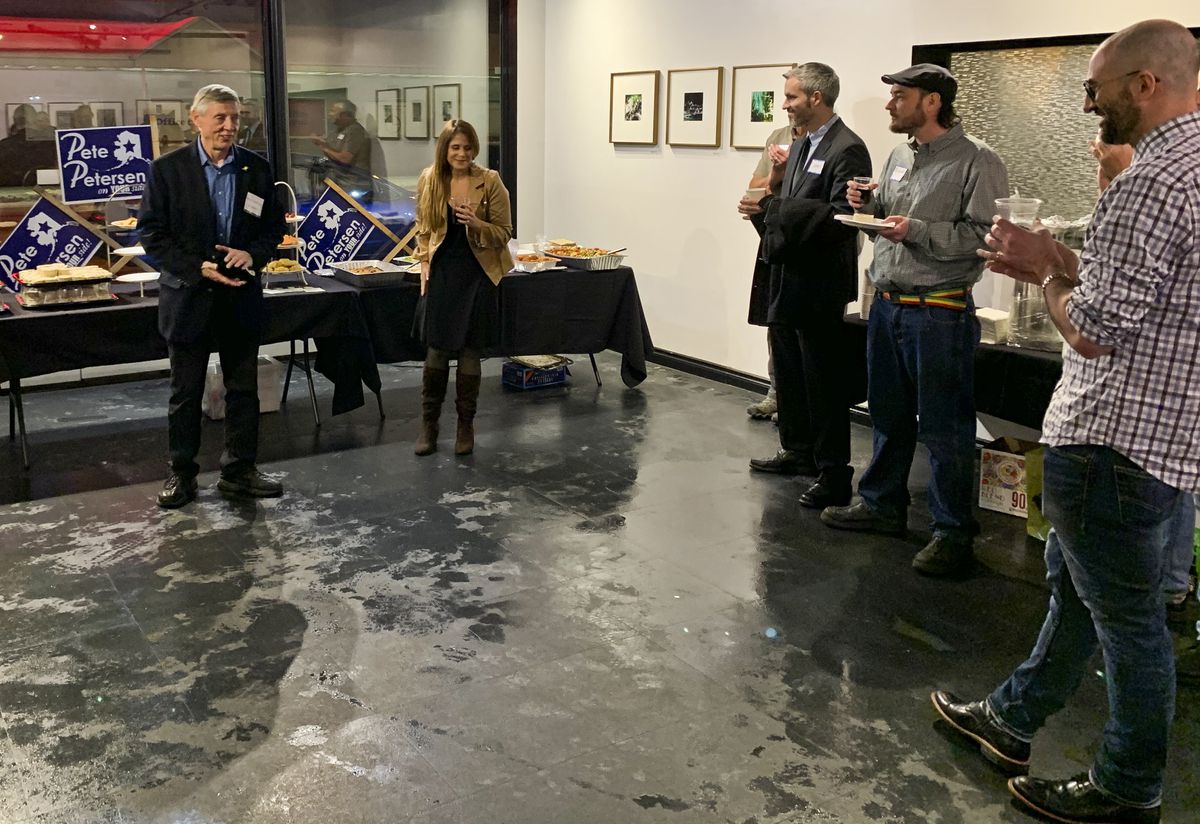 Assemblyman Pete Petersen (left) and Jana Weltzin (right) address a crowd of about 40 in the marijuana industry on Jan. 30 at a fundraising event for Petersen's reelection campaign. Weltzin, a marijuana attorney and board member for the Alaska Marijuana Industry Association, has thrown fundraisers for several Anchorage politicians and encourages her clients to be politically active. (Aubrey Wieber / Anchorage Daily News)

Assemblyman Pete Petersen (left) and Jana Weltzin (right) address a crowd of about 40 in the marijuana industry on Jan. 30 at a fundraising event for Petersen's reelection campaign. Weltzin, a marijuana attorney and board member for the Alaska Marijuana Industry Association, has thrown fundraisers for several Anchorage politicians and encourages her clients to be politically active. (Aubrey Wieber / Anchorage Daily News)

Gathered in a white-walled space squeezed between two downtown Anchorage pot shops, about 40 people milled about an art gallery on Jan. 30, sipping wine and snacking on meatballs and tea sandwiches. It was a hip crowd; attendees sported horn-rimmed glasses, slim-fit jeans and stylish leather boots.

Other than the slight smell of weed, little signaled this fundraiser was hosted by about a dozen cannabis businesses.

They were there at the behest of a local marijuana attorney, Jana Weltzin, to support Assemblyman Pete Petersen’s reelection campaign. Weltzin has done the same for many notable Anchorage politicians. She rounds up her clients and encourages them to engage — and donate.

“It’s really important if you don’t like the way the government is handling its business to be involved and to make that known and to contribute to the politicians that you think will change the system,” Weltzin said in an interview.

The marijuana business has always been “more sophisticated than people think,” said Assemblyman Forrest Dunbar, who is running for mayor in 2021. Weltzin also arranged a small fundraiser for Dunbar this month.

Since recreational marijuana became legal in Alaska, local businesses have joined other industries in the state, like oil, fishing and tourism, in working to influence how their trade is regulated. By holding fundraisers and interacting with local and state leaders, Alaska’s marijuana industry is building its political capital, aiming to shape everything from rules restricting signage to how the industry is taxed.

As a new industry, it’s a critical time for pot businesses to be politically engaged.

Weltzin said the industry can point out loopholes and unintended consequences of regulation, which she predicts will continue to change over the next three years.

“It’s still evolving,” she said. “In 2016, these regulations were made with no real understanding of how it was going to look in real life.”

On Feb. 6, Assemblyman John Weddleton’s economic development committee discussed allowing marijuana businesses to advertise with free-standing signs on their property, something that’s currently not allowed. Weddleton said the city copied state code on signs, which he said was probably put in place out of fear of “legitimizing drug use in front of our kids, and rubbing it in our faces,” he said.

“There was a sensitivity to it, and I think that’s mellowed out now,” he said.

Weddleton, himself a small business owner, keeps a running list of possible tweaks to make the regulations less tedious for marijuana businesses. He said Weltzin weighs in during public meetings, but otherwise doesn’t lobby him for changes. He generates the list based on his own experiences on the Assembly.

“My view overall is, it’s legal, they’re small businesses, and I relate to that,” he said.

Statewide, the industry wants regulators to overhaul how marijuana is taxed.

Right now, the state imposes a weight tax of $800 per pound. That means the highest and lowest quality weed is taxed the same. There isn’t a consensus in the industry for a new tax structure: Some want the tax burden to be spread throughout the process of cultivation, manufacturing and retail sales. Some want a sales tax. Others want a smaller weight tax.

Making adjustments to how businesses are taxed is a priority for the pot industry, but the goal isn’t to buy off politicians, Weltzin said.

“What we want is responsible legislation, common sense legislation, but not open up the floodgates and just treat it like it’s a gas station,” she said. “It’s still a substance that needs to be valued and respected and kept away from kids, because that would be the downfall of the industry.”

She wants people in office who listen to the industry’s ideas. To that end, she’s held fundraisers for Assembly members Weddleton, Dunbar, Chris Constant and Kameron Perez Verdia, as well as Rep. Gabrielle LeDoux, R-Anchorage. Weltzin also co-hosted a fundraiser for Mayor Ethan Berkowitz, but she said it was not industry-specific.

“It pins those Assembly members into a box," Kennedy said. "I think it could be problematic for them, if they’re all about supporting the marijuana industry. For a lot of people, it’s still a drug.”

Kennedy represents Eagle River, where restrictions on where retail shops can open are more strict than in Anchorage. So far, none have opened up.

“My community is still pretty opposed to it," she said. “I want to make sure we have really good and solid restrictions on it.”

Kennedy said the industry largely does not approach her. They know her stance on the issue, she said.

Kennedy said she thinks being so closely associated the industry puts politicians at “risk.” Personally, she doesn’t align with the industry, which she said has a negative impact on the public.

But even though Kennedy doesn’t deal with pot businesses much, she says they’re effective.

“They are an active industry, and they certainly have been working on benefiting the industry through the Assembly, especially when you look at the Assembly approving things like on-site consumption,” Kennedy said. The Assembly in October approved a ballot measure that would allow people to smoke pot in retail locations around Anchorage. Anchorage voters will decide on the measure in the upcoming city election.

Dunbar said he hears from the marijuana industry more than other industries. He said that’s because the Assembly is still working the kinks out of the regulatory system.

For that reason, Assemblyman Petersen said it behooves them to be politically active, but also responsible business owners.

“They have a window,” Petersen said of the industry. “I told them right from the beginning — if you guys screw up, someone’s going to collect signatures and make it illegal again.”

Petersen said he doesn’t worry about the optics of having the industry throw a him fundraiser; it’s just how you run campaigns in Alaska now.

And the industry is courted.

Recently, Rep. Don Young reached out to the Alaska Marijuana Industry Association to ask for a fundraiser. Young is a founding member and co-chair of the U.S. House Cannabis Caucus, which works on marijuana reform issues, and has supported the industry.

Lacy Wilcox, the marijuana association’s president, contacted association members. She said there was some interest, but so far, the timing hasn’t worked out.

Wilcox said she will pass requests to hold fundraisers on to members at the local level, regardless of their policies.

But support isn’t always guaranteed. Wilcox said her members aren’t single-issue voters. Likewise, Weltzin said it can be more complicated than just where a politician lands on marijuana policy.

Regardless on whether a fundraiser is thrown, the interest speaks volumes, Wilcox said.

Alaska has a long and complicated history with marijuana, first decriminalizing it in 1975. Because of that, Alaskans have grown it during various shades of state legality for decades.

"Marijuana has been here before most of this town was built,” Weltzin said.

"There certainly were people back then who were like, ‘screw this, this is too much of ‘the Man’ in my business,’” she said.

She works to quell those tensions and to help both sides find common ground.

“Every day it gets better — the relationship between the regulator and the regulated," she said.

‘In this business now, this is a part of it.’

But marijuana is still federally illegal, and with that comes limits on the industry’s political activities.

Pot shops still have to do business in cash. And cash donations to politicians are capped at $100, while credit cards can be charged up to $500.

At Petersen’s recent fundraiser, envelopes were on the donation table by the door, rather than the standard credit card reader.

Alaska’s campaign contribution limits make individual contributions more common than in many states, which allow large corporate donations. That makes it more complicated to decipher how much money the marijuana industry is putting into Alaska politics, as much of it comes from individuals rather than businesses or political groups.

State and local lobbying reports show no registered lobbyists for the marijuana industry. Weltzin does not see herself as a lobbyist. Wilcox registered as one in 2019, but hasn’t in 2020. As the Alaska Marijuana Industry Association president — an unpaid position — she lobbies for her association as a volunteer. She’s not required to register, and the industry hasn’t hired a contract lobbyist.

"I see them less using the power of the purse, and more showing up to things like the Community and Economic Development Committee, and just talking with us about how to regulate this industry,” Dunbar said. “That’s where they have the most influence in Anchorage. It’s less about the donations.”

At his January fundraiser, Petersen said he was hoping to bring in about $3,000. Days later, he declined to say how much he brought in. But, he said, “it went well.”

Petey Tuitele, manager of Scorpion Grass in Wasilla, said he attended Petersen’s fundraiser at the downtown Anchorage art gallery to have a voice.

“In this business now, this is part of it,” Tuitele said.

The quest for ‘normalization’

Petersen, a demure politician who served in the Alaska House from 2008 to 2012, was elected to the Assembly in 2014. That year, he was put on the marijuana committee, created to study how the city would regulate legal weed.

Since then, as he worked to tailor regulations, the industry has come to see him as an insider.

“This is a politician who didn’t apologize for liking us in the beginning, before we even got popular," Weltzin told the crowd attending his fundraiser. “I see him fighting for normalization for us in a way that no other politician I’ve actually seen has."

When regulations were first being designed, Petersen advocated that code enforcement officers, rather than police, do the regular inspections of dispensaries. They show up in plainclothes, rather than with a badge and a gun.

“It’s still federally illegal," Weltzin said. "The last thing they want to see is a cop.”

Originally he was unsuccessful, but about a year or so later he got the policy changed.

At about 7 p.m., Petersen took the mic at his fundraiser to make his pitch to a room full of cannabis workers and business owners. He started by telling them why he’s seeking another term. He then moved on to homelessness.

It wasn’t until several minutes into his speech that he started talking about the issue that brought them all to the art gallery on Fifth Avenue.

He listened to business owners’ concerns about potential tax increases and regulations. He responded that he wouldn’t consider increasing the tax on marijuana until voters approve a local tax on alcohol.

That’s the sort of approach Weltzin and Wilcox seek.

It’s crucial to have policymakers who understand what they’re regulating, Wilcox said. And as the substance works to shed its stigma, she said, industry workers will integrate into their community councils, assemblies, and might even take hold in Juneau.

“Don’t be surprised if you see some marijuana people running for office," Wilcox said.