Striking out on his own, legislator hopes to charter new coalition in the Alaska House 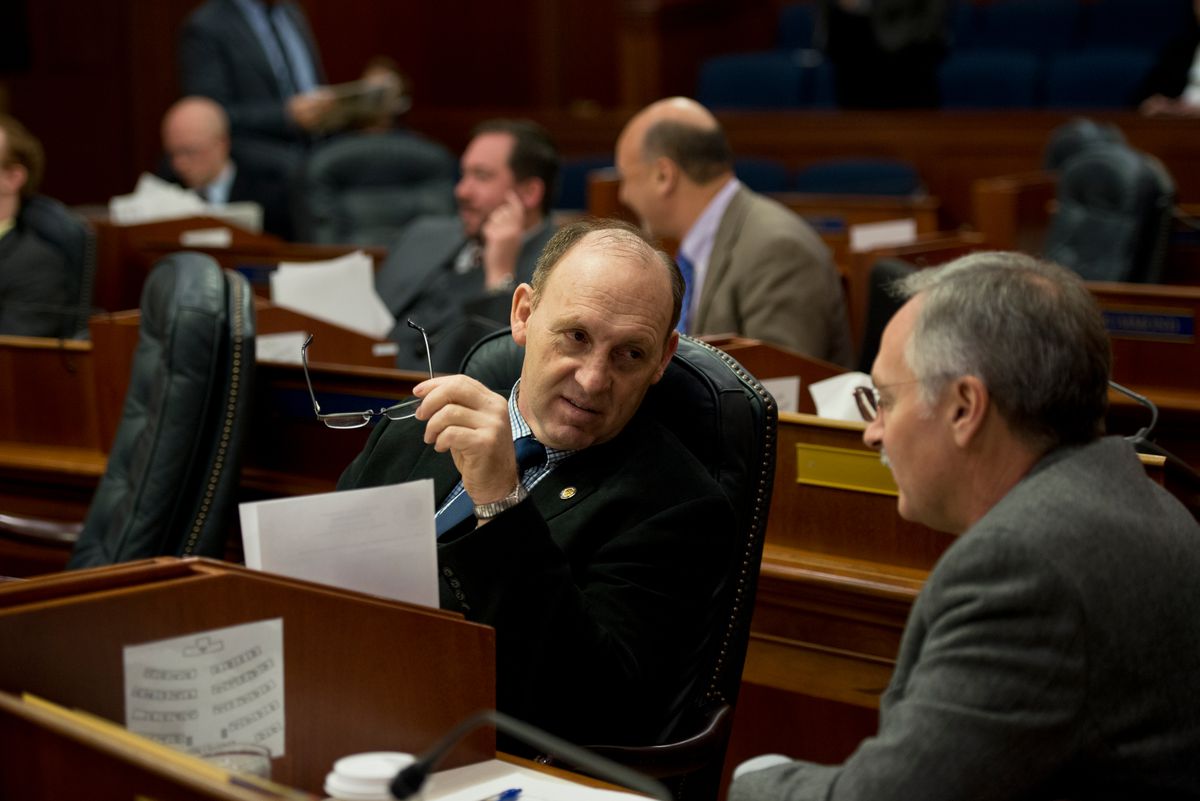 JUNEAU — Kenai Republican Rep. Gary Knopp on Saturday formally announced that he will not join a Republican-led majority in the Alaska House of Representatives. The move denies Republicans the 21-member support needed to control the House and leaves the body adrift less one month before the Legislature convenes Jan. 15.

Speaking by phone from the Kenai on Sunday, Knopp said the prospective Republican majority, a result of November’s general election, was unsustainable, and he is attempting to force a compromise in order to avert a collapse in the middle of the legislative session.

“I can’t think of anything worse than going down there to implode in the middle of session.,” Knopp said.

While Republicans control 23 of the 40 seats in the Alaska House, only 21, including Knopp, had pledged their support to the majority that intended to replace last year’s predominantly Democratic coalition. The remaining two — Rep. Louise Stutes of Kodiak and Rep. Gabrielle LeDoux of Anchorage — were members of the coalition and have kept their distance from the new Republican group.

In the House, holding the majority means a group has the ability to elect the speaker of the House, choose committee leadership and generally set the agenda. With the election of Gov. Mike Dunleavy and Republicans firmly in control of the Senate, control of the House would give the party a legislative trifecta and little need to compromise with Democrats or independents on non-budgetary items.

As Knopp sees it, having a bare-minimum majority in the House is doomed to fail because Rep. David Eastman, R-Wasilla, would be one of those 21 members.

While Knopp did not say Eastman’s name — he referred to him as “that one member ... you know who I’m talking about” — Eastman has a history of rebellious positions. During the 2017-18 Legislature, Eastman was the lone “no” vote 75 times on the floor of the House, according to a database analysis performed by Juneau mainframe operator Will Muldoon. The next-closest legislator was the lone “no” vote four times. Eastman had more lone “no” votes than all legislators combined from 2013 to 2016.

At the time of Knopp’s move, Eastman had not yet announced his support for the prospective new speaker of the House, Republican Rep. David Talerico of Healy.

“That train’s getting ready to crash,” Knopp said of the situation in the planned Republican majority.

Knopp said he believes lawmakers need to settle their leadership questions quickly. Until control of the House is decided, lawmakers in the House will have problems hiring staff, will not know their committee assignments and will be unable to effectively plan ahead.

As Knopp explained, his vision is for a new coalition in the House, split precisely down the middle — 12 Democrats and 12 Republicans. Among those 24, leadership positions would be divided evenly, 3-3. Participants would pledge to avoid legislation that might divide them: No changes to oil and gas taxes, for example, no broad-based taxes, and a minimum of personal legislation. With that “charter,” he believes lawmakers can pass a budget and adjourn within 90 days.

Knopp said he believes he has the Democratic support for the idea, but “I think my side’s the problem."

There are seven new Republicans in the House, and “they’re being organized by incumbent members that want to toe the party line,” Knopp said.

In addition, two Republican-held seats exist in some degree of uncertainty. Republican Bart LeBon won his race to represent House District 1 by a single vote in a recount, but Democratic candidate Kathryn Dodge is challenging the result in court.

In House District 13, Rep.-elect Nancy Dahlstrom has been chosen by Dunleavy to serve as commissioner of corrections and will not serve her elected term. It is not yet known who the governor will pick to replace her.

Knopp said resolving those two issues won’t fix the uncertainty in the House, which is why it’s better to fix the problem before it becomes a problem.

“I’m hoping this is going to make them acknowledge we’re not cohesive and we need to do something,” he said.

Stutes, from Kodiak, said she has talked with Knopp at length about the idea and thinks it is possible.

“We’re working on putting together an organization with some good, solid people who are going to work together for the best interest of the whole,” she said.

Neither Stutes nor Knopp were willing to discuss the extent of their conversations, citing the sensitivity of ongoing negotiations.

Ketchikan Rep. Dan Ortiz, the lone independent remaining in the House, said by phone Sunday that he has talked with Knopp about the idea and does support the idea of a bipartisan coalition in the House.

Whether or not Knopp’s coalition happens, he has succeeded in jump-starting conversation, Ortiz said.