Alaska Senate votes to repeal and replace most of SB 91, sending crime bill to governor’s desk 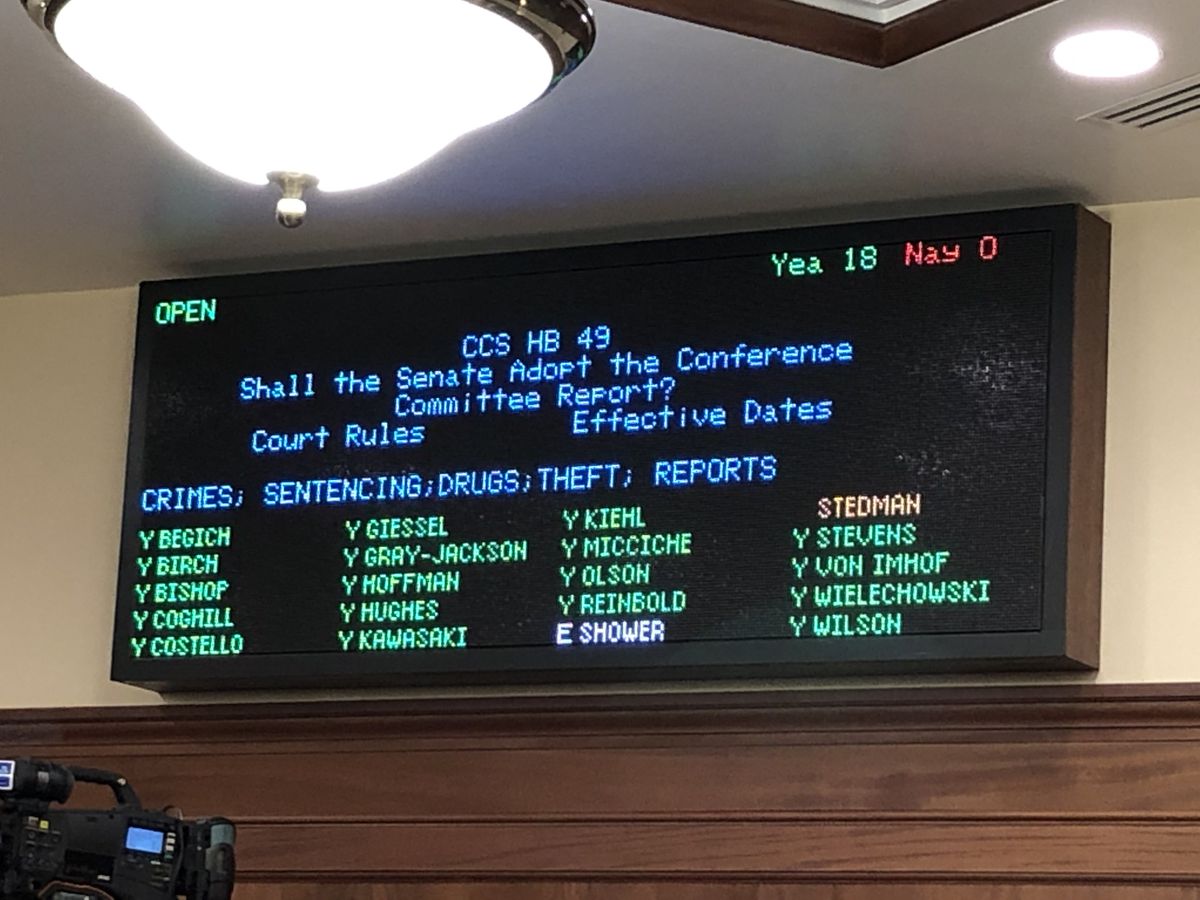 The Alaska Senate voted 18-0 on Tuesday, May 28, 2019 to send a compromise version of the SB 91 repeal-and-replace legislation to the desk of Gov. Mike Dunleavy. (James Brooks / ADN)

The Alaska Senate voted 18-0 on Tuesday, May 28, 2019 to send a compromise version of the SB 91 repeal-and-replace legislation to the desk of Gov. Mike Dunleavy. (James Brooks / ADN)

JUNEAU — The Alaska Senate has approved, and Gov. Mike Dunleavy will sign, compromise legislation that lawmakers say repeals and replaces much of the controversial criminal justice reform known as Senate Bill 91.

“Hallelujah,” said Sen. Shelley Hughes, R-Palmer and chair of the Senate Judiciary Committee, after Tuesday’s 18-0 vote to approve a deal on repeal-and-replace legislation.

“I think Alaskans will be saying hallelujah,” she said.

The House has already approved the repeal-and-replace bill, which is known as House Bill 49. The governor’s approval is the last significant hurdle before it becomes law, and Dunleavy said Tuesday that he will sign the bill.

“We want to make Alaska one of the safest states in the country, not one of the least safest,” he said. “This is a huge start."

Passed in 2016, Senate Bill 91 reformed the state’s parole and pretrial systems, generally lowering criminal punishments for nonviolent offenses. The goal was to reduce the number of Alaskans returning to prison after release, something that would in turn lower prison costs, but critics blamed it for contributing to a spike in property crimes.

In response to that criticism, lawmakers revised SB 91 in a series of bills. That didn’t eliminate the criticism, and Dunleavy was elected after pledging to seek its full repeal. Members of the House of Representatives — particularly members of the coalition House majority — declined to pass legislation proposed by the governor, forcing a compromise.

With the Senate taking a harder line than the House, that compromise is closer to the governor’s original vision than the alternative offered by the House.

“I am happy — I would have preferred the Senate version — but the minor tweaks are not significant for public safety on the street,” Hughes said.

According to a plain-English analysis of the bill by Hughes’ staff, the repeal-and-replace legislation:

• Makes simple drug possession a jailable offense. The first arrest is a misdemeanor punishable by up to one year in prison. A second arrest within 10 years is a felony.

• Increases all presumptive felony prison terms except those for first-time Class C felonies, the lowest-level felony.

• Allows prosecutors to combine multiple small thefts over a six-month period in order to charge serial thieves with a more serious theft offense.

• Removes the requirement for judges to follow an unbiased mathematical formula when deciding whether to release a suspect from jail before trial.

• Creates the crime of “terroristic threatening” for people who threaten a shooting or bomb but don’t carry it out.

• Criminalizes possession of car theft tools with the intent to use them.

• Makes using a spy camera to illicitly observe a changing room or bathroom a sex crime.

• Increases the penalty for missing a court date.

Through the legislative process, lawmakers repeatedly stated that the passage of repeal-and-replace legislation doesn’t mean an end to criminal justice work.

“Step two is going to continue next year as we look at rehabilitation and substance abuse treatment within the prison and making sure that inmates are being released in better shape,” Hughes said.

Correction: An earlier version of this story incorrectly reported on two components of the crime bill. The list of items in HB 49 has been updated to remove two sections that do not appear in the final version. The bill does not make it a crime to refuse to provide a DNA test after arrest. It also does not address electronic monitoring; the section revoking jail credit for time spent on electronic monitoring before conviction on a serious crime was removed from HB 49 and put into HB 14, a separate piece of legislation.