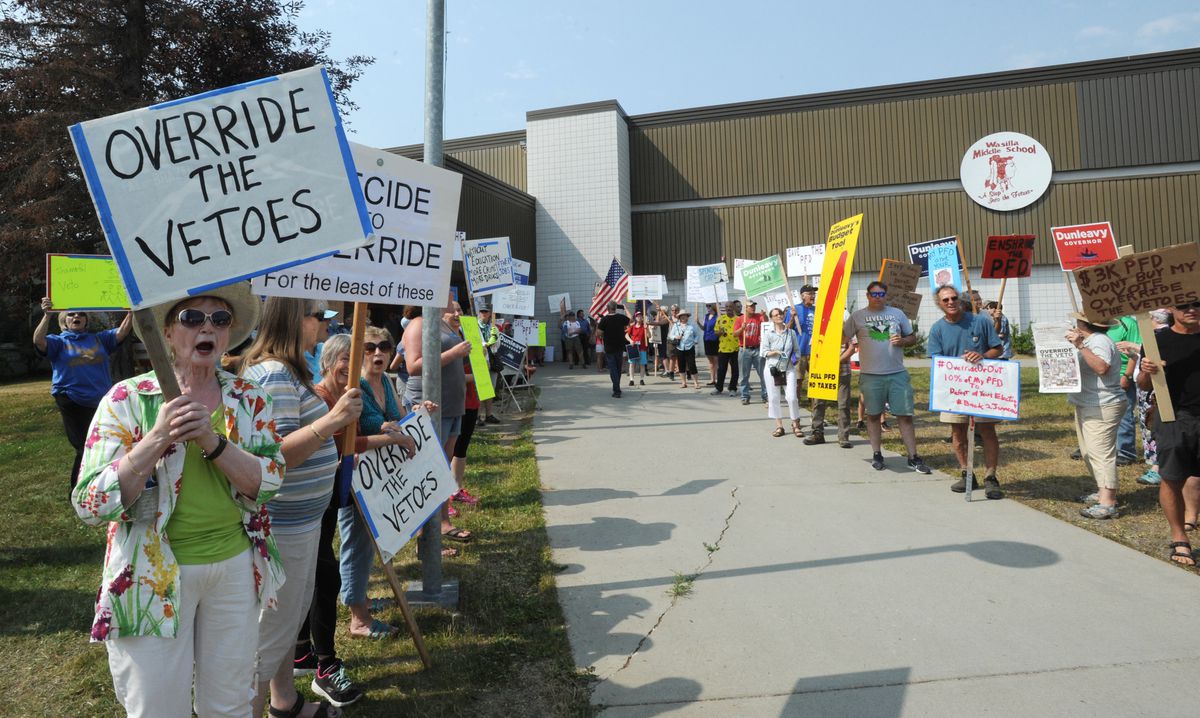 Activists who support a veto override stand across from people who support a full PFD prior to the legislative special session at Wasilla Middle School on Monday, July 8, 2019. (Bill Roth / ADN)

Activists who support a veto override stand across from people who support a full PFD prior to the legislative special session at Wasilla Middle School on Monday, July 8, 2019. (Bill Roth / ADN)

WASILLA — In a chaotic microcosm of the political gulf separating Alaskans, some 200 supporters and opponents of Gov. Mike Dunleavy’s budget proposals faced off for a tense half hour outside the middle school where the governor had called a special session that wasn’t to be.

“Override!” shouted some 60 opponents of the governor’s $444 million in vetoes.

“No!” screamed the other side, perhaps 150 strong.

“Save our State!” shouted veto opponents.

“Follow the law!” shot back groups who argue the governor is following Alaska statute in his effort to pay a large, $3,000 Permanent Fund Dividend and in calling for a special session in Wasilla.

Inside Wasilla Middle School early Monday afternoon, a minority group of legislators who support the governor’s proposals met briefly, but lacking the numbers for a quorum, broke up and talked with news media.

The majority of their fellow lawmakers, opposed to meeting in the city where the governor lives and enjoys strong support, convened the special session in Juneau.

The state capital saw it’s own protests, though without the strong support for the governor.

Before the Wasilla meeting got underway, Dunleavy supporters lined the Parks Highway in large numbers before marching to the school, waving signs with slogans such as “Save the PFD."

“We need to live within our means and not steal from Alaska’s neediest people,” said Linn McCabe, a Big Lake resident, who carried a sign that said “No overrides, Full PFD.”

[Full coverage of the special session, the governor’s budget vetoes and the Alaska Legislature]

The pro-Dunleavy rally was organized by “Save the PFD” and other groups. “Alaskans Take a Stand," and other groups filled out the other side, calling on lawmakers to come up with the 45 of 60 votes needed to reject the governor’s vetoes.

Anti-Dunleavy protestors said on Monday the vetoes, announced late last month, will force University of Alaska campuses to shut down, devastate health care services and the poor, and lead to job losses in the thousands, gutting the economy.

They were outnumbered by the governor’s supporters, a reversal from recent meetings in Anchorage and Fairbanks where most people spoke against the governor’s actions.

In Wasilla, the two sides were separated by a wide sidewalk to the school but tense interactions — and sometimes meaningful exchanges — couldn’t be avoided.

Three members supporting the governor held a banner over the sidewalk like an entryway arch, requiring many people entering the school to walk under it: “U can get our PFD or our vote but not both," it said. It was a slap at lawmakers in Juneau looking to provide a smaller, $1,600 dividend, while leaving more funds available for state services.

Wasilla resident Ken Hills said lawmakers who refused the governor’s call to meet in Wasilla should be arrested.

“They should follow the law," he said. “I want to see (Republican Senate president) Cathy Giessel in handcuffs.”

“What are you, antifa?” Hills replied, in reference to militant, left- anti-fascist groups that have made news in the Lower 48.

Francis later told a reporter she’s upset because her 90-year-old grandmother is losing about $200 a month after the governor eliminated payments under the senior benefits programs with a $21 million veto.

“She can’t take care of herself,” she said.

“What the governor is doing is detrimental to the citizens of Alaska and the economy,” Matt Welk, a Chugiak resident, shouted to a reporter.

Zoe Fuller, a farmer from Palmer, said she supports payment of the full dividend, like Dunleavy, calling it an important social program. But she opposes the vetoes because they will harm people.

She said she found common ground Monday in an “amazing” conversation with an organizer of the pro-Dunleavy rally. They agreed that the state’s budget problems could be sharply reduced if the state stopped paying oil companies more than $1 billion annually in tax credits.

“We agreed we could protect the defend and state services at the same time," she said.

Sarah Welton, an American Baptist pastor from Palmer and a Matanuska-Susitna Borough School District board member, said the governor’s cuts will hurt the most vulnerable Alaskans.

“She’s wrong," said a man walking past, waving a finger at her sign. He called the veto opponents “morons.”

In the hour before the Legislature began its Juneau session, protesters filled the street in front of the Capitol, demanding that the Alaska Legislature override Dunleavy’s vetoes.

Between speeches delivered from the back of a pickup truck, hundreds of attendees sang the Alaska Flag Song and chanted “over-ride” with enough volume that it reverberated through the Capitol and for several blocks around.

Based on an aerial photo, KTOO-FM radio estimated more than 700 people attended the protest.

Laura Lucas, carrying a sign with the initials S.O.S. for “Save Our State,” said the rally was “one of the largest I’ve been to this year.”

Deeper in the crowd, Molly Zaleski lofted a sign referencing the vetoes as “Dunleavy’s Dumpster Fire.”

“I have a son, and I want him to stay in the state and get a good education,” she said, referring to the governor’s veto of 41 percent of the state contribution to the University of Alaska.

“I know what these vetoes are — they are an abomination,” she said.

Her father works at the University of Alaska.

“If they cut the university, than daddy loses his job,” she said. “Dunleavy is really bad.”

From the bed of the pickup truck, Joe Nelson — board chairman of Sealaska, the regional Native Corporation for Southeast Alaska — urged speakers to continue their efforts.

“Please don’t stop with this rally,” he said. “We need to carry this through the rest of the week.”